President Emmanuel Macron wants to up the ante in the trade talks with the European Union declaring itself prepared to end the year without a future relationship pact. He believes wrangling over a free-trade agreement could then be restarted in 2021 without the time pressures of the transition period, according to EU sources. His warning came as Michel Barnier revealed he was uncertain whether a deal would be concluded before Britain exits its post-Brexit transition from the bloc in December.

An EU diplomat said: “Bit more flesh. EU diplomat says: “We are quickly approaching a make or break moment in the Brexit talks. Intensive negotiations are continuing in London. As of this morning it is still unclear whether negotiators can bridge the gaps on issues like level playing field, governance and fisheries.

“As we are entering the endgame of the Brexit negotiations, some member states are becoming a bit jittery. So this was mostly an exercise to calm nerves in Paris and elsewhere and to reassure member states that team Barnier will continue to defend core EU interests including on fisheries.”

Under Mr Macron’s plan, Brexit talks would resume next year after a “small shock” to trade between the EU and UK.

But the Frenchman says that would be incomparable to the much graver danger of making too many concessions to secure a last-minute deal. 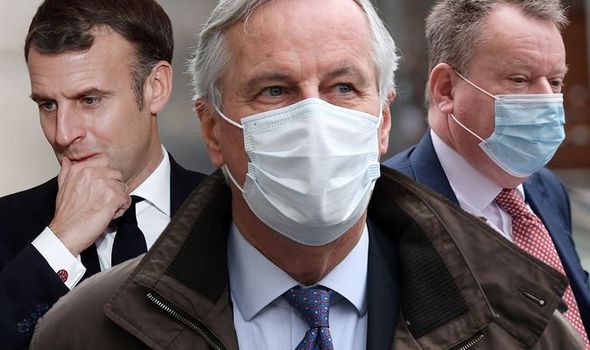 The French government was said to be concerned that Mr Barnier is preparing to give too much ground in the battle over post-Brexit fishing rights as time runs out.

At a private meeting with EU envoys, the bloc’s chief negotiator was told accepting no deal was better than a bad deal as nervous states clamped down on concessions.

Mr Barnier said the talks were moving forward but still largely held up by blockages in the wrangling over fishing, common standards and policing the final agreement.