Sadiq Khan: Caller says she has 'no confidence' in him as Mayor

The London mayoral election is due to take place on Thursday, May 6, after being delayed by a year amid the coronavirus pandemic. The incumbent mayor Sadiq Khan served for an additional 12 months and is now seeking re-election but he is facing serious competition from a record-breaking 20 contenders who have pitched their hats into the race.

Six people in London are eligible to vote for the next London mayor on May 6 when the polls open.

In total, Londoners will have 20 candidates to choose from, with the Labour Party incumbent Sadiq Khan currently leading in the polls.

The Mayor of London is an important political role with a £19bn budget.

The mayor is responsible for Transport for London, the Metropolitan Police and has a role in housing, planning and the environment – all key areas affecting most people’s lives.

But how they would tackle these areas changes massively depending on the candidate. 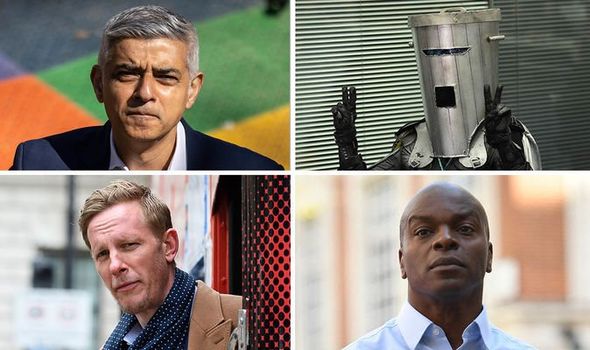 Who are the candidates and what do they stand for?

Mr Khan, 45, is Labour’s candidate for Mayor of London, having first been elected in 2016.

He was formerly the MP for Tooting and a human rights lawyer.

His reelection campaign is pitched around the central element of employment, with particular attention paid to the tourism and investment sectors.

Mr Khan has pledged to help more than 300,000 Londoners who were left unemployed amid the Covid pandemic and would like to boost the economy by £5m.

The Labour candidate also wishes to boost practical support for business owners and individuals and simplify access to support for small businesses.

Mr Bailey, 49, has been a member of the London Assembly since 2016 and served as a special adviser to David Cameron during his term as prime minister.

The Conservative contender’s platform is centred on knife crime and reducing the rate of these crimes across the capital.

Mr Bailey plans to increase police patrols in London and boost stop-and-searches to cut crime during his “first 100 days” if elected.

He also intends to use more advanced technology to boost security and cut down the number of knives in public.

Aside from crime, Mr Bailey is pitching his campaign on helping prospective homebuyers by promised to include a plan to build 100,000 shared ownership houses to be sold for £100,000.

He is standing as a candidate for the Reclaim Party, which Mr Fox launched in 2020 with £5m reportedly donated by supporters.

Nigel Farage and the Reform party have pledged their support for the actor, who has been a critic of the Government’s management of the Covid crisis and has refused publicly to get the vaccine until 2023 over safety concerns.

If elected, Mr Fox wishes to “unlock” Londoners from lockdown and enable them to “reclaim their freedom to move” and “freedom to work”.

Like the Conservative contender, Mr Fox also wants to crack down on crime by reintroducing stop and search and ending the Met’s “obsession with diversity and inclusivity”.

Count Binface was formerly known as Lord Buckethead, who previously stood against Theresa May in the 2017 general election.

The Count’s policy hints at a rebranding of London infrastructure, with London Bridge due to be renamed Phoebe Waller, after the Fleabag creator.

His manifesto also outlines how the hand dryer in an Uxbridge pub toilet would be relocated to a more sensible location.

Under his policies, mask-wearing would be encouraged indefinitely and those who are anti-vaccination would be banished to the “Phantom Zone”.

The Count would also seek to have London rejoin the EU. 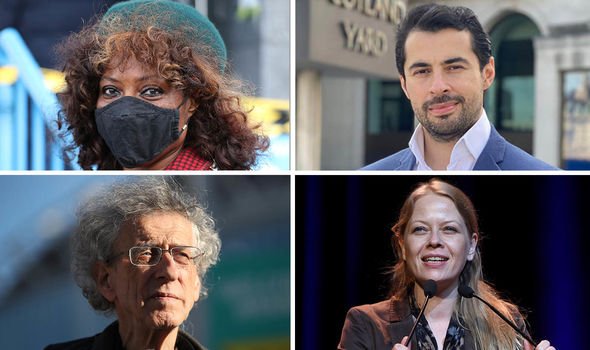 Mr Balayev is from the Renew Party which is a centrist political party in the UK.

The party describes itself as wanting to reform existing political structures and does not identify with either left or right ideology.

Mr Balayev wants to start a new economy in London, powered by data, which would see London benefit from a similar system as Silicon Valley.

He also advocates for the increased use of technology and digital sectors to help other areas including crime and the pandemic.

Sian Berry is the candidate for the Green Party and is running for City Hall for the third time.

Her manifesto includes many ideas targeted at helping protect London’s wildlife, including bees, hedgehogs and sparrows.

She also wants to introduce “flat” fares on the Tube, to benefit those travelling in from outer regions and extend the ULEZ across the whole capital.

The other big target is to reduce traffic, cutting miles travelled by 40 per cent by 2026 and by 60 per cent by 2030, by which point all diesel and other vehicles with toxic exhaust fumes would be banned.

Ms Brown is a mother and grandmother who wants to introduce legally binding citizens assemblies which would replace the traditional mayoral role.

Her manifesto essentially mandates how her party is “anti-political” and would seek to give the power back to ordinary people.

The citizen’s assemblies would involve randomly selected people from across the city who would come together to make legally binding decisions about how to run transport, policy, health and education.

The Let London Live candidate wants to end all lockdowns and spend more time on serious illnesses, including cancer and diabetes.

He wants to ban the introduction of vaccine passports permanently and wants to stop the extension of ULEZ.

If elected, Mr Corbyn would also seek to defend council housing and end homelessness in the capital. 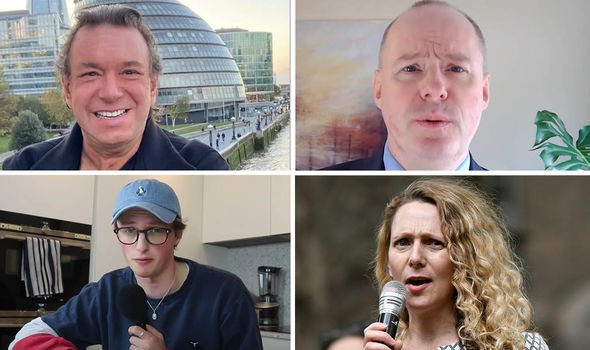 Max Fosh is running in direct opposition to Laurence Fox – in fact, he does not claim to believe himself to be a good mayoral candidate but just wants to beat the former Lewis actor.

Mr Gammons is the mayoral candidate from UKIP who wants to create a safer London by reducing violent crime and increasing policing.

His policies involve a plan to create affordable housing and helping homeowners by freezing council tax and protecting renters.

Mr Hewison claims Brexit has been a disaster for London and is standing with the aim of rejoining the EU.

He said: “Millions of Londoners voted to remain in the EU. I will ensure they still have a voice.

“We’ve been badly let down by the opposition parties who’ve left us politically homeless.”

Mr Hewison believes rejoining the Brussels bloc will improve Londoners’ freedom of movement to live, study, perform and retire abroad, as well as being better for environmental and food standards and to give workers more protection.

Ms Hudson is the candidate for the Animal Welfare Party, which is aimed at pushing for carbon net-zero status in London by 2025.

She also wanted to improve health services, save NHS funds and protect the environment by promoting plant-based diets.

The Animal Welfare Party candidate wants to incentivise the use of public transport and improve air quality.

Additionally, she wants to protect London’s nine million animals and foster a culture where speciesism is rejected. 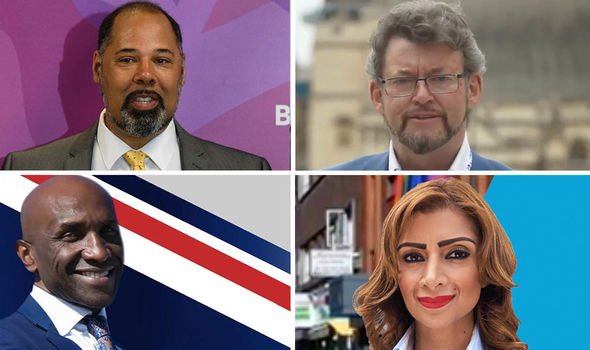 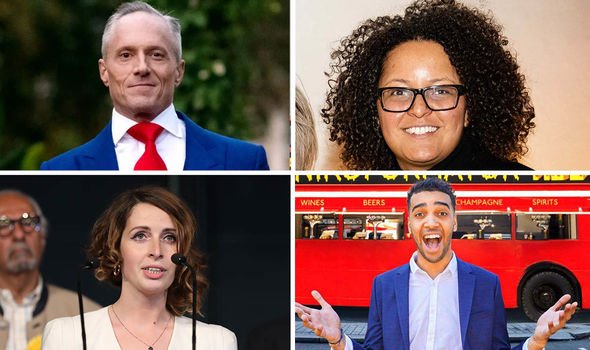 Mr Kelleher was born in Bermondsey and raised on a council estate near Elephant and Castle.

The candidate seeks to support policing in the capital by increasing beat officers by 10,000 and scrapping low priority activities such as monitoring social media.

He wants to prioritise free public transport for all young people, up to the age of 25, as well as introduce a London Citizen Card for those who have lived in the capital for five years consecutively, to enable them to access free tube travel and other benefits.

Mr Kurten has been a London Assembly Member for five years.

He wants to defend the rights for free speech and liberty, as well as improve safety and sanity.

He also wants to remove pop-up cycle lanes and road blockages and stop the expansion of ULEZ and the Congestion Charge.

Mr Kurten also wants to stop all restrictions on London businesses to help boost the economy.

Ms London is an entrepreneur who is an independent candidate hoping to help London by going to “the grassroots and listening to Londoners”.

She wants to unite London and has pledged to “represent all the people of London, not a political party”.

Ms London has vowed to support the LGBT community, women’s centres and animal welfare and wants to encourage investment and employment opportunities.

Mr Obunge is a pastor and executive of the Peace Alliance, which aims to tackle knife crime.

His policies involve working to create safer streets and communities and developing an affordable transport network and housing.

He also wants to develop a Covid business recovery fund and push for greener living by promoting carbon neutrality and electric transportation.

He does not have a manifesto with his policies, but he claims “the system is broken for young people”.

The candidate claims the biggest threat to London is Prime Minister Boris Johnson.

Ms Porritt is the Liberal Democrat candidate for mayor and her policies are chiefly in support of improving jobs, homes and clean air.

She wants to reinvent high streets to boost spending.

She has also pitched jobs at the heart of her plan to take London forward.

Ms Reid is a candidate focused on building a better London for women, saying she wants to make ending violence against women London’s top priority and invest in a care-led recovery.

In addition, Ms Reid wants to create affordable childcare for all Londoners and make London a well-being capital.

Mr Rose is the London Real Party candidate who wants to rebuild London’s economy by abolishing the congestion charge until 2022 and dropping business rates to zero.

The contender wants to increase the number of police officers on the street and raise £100m from businesses to be sent to community centres.

He also wants to build 50,000 new affordable homes by Christmas and run Transport for London at a profit by introducing an infrastructure levy.