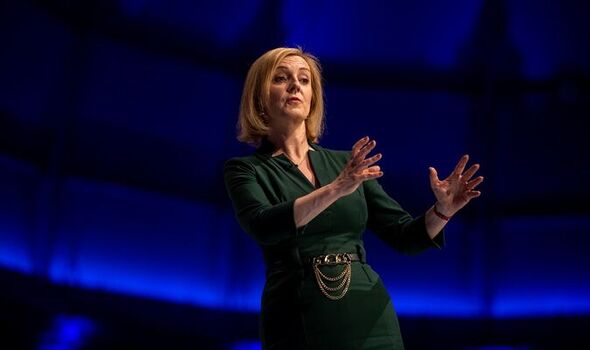 The Tory leadership contender received a boost when she won the strong endorsement of Dover MP Natalie Elphicke – one of Parliament’s most ardent opponents of illegal immigration. Ms Elphicke said Ms Truss’s plans would ensure that people-smuggling gangs no longer have a “free ride”.

Ms Truss wants to strengthen the Government’s policy of sending people to Rwanda for asylum processing and hopes to forge similar partnerships with other countries.

She further plans to increase the frontline Border Force by 20 per cent.

She said: “This is the only way to deter the traffickers and stop the small boats.”

Party members receive their ballots to vote in the leadership election.

Ms Truss, who was campaigning in the West Midlands yesterday, said: “We are facing a crisis in the English Channel and need to do more to stop the small boats.

“Words are not enough. I will take firm and urgent action to protect our borders and stop the traffickers once and for all.

“That’s why I will expand our Border Force and build on the Rwanda policy.”

In a signal that she plans to change our relationship with the European Court of Human Rights, she said: “I will also make sure that the ECHR works for Britain.”

Writing in the Sunday Express, she said: “Liz will make sure that the British Bill of Rights cannot be overruled by the European Court of Human Rights – so that our immigration policy cannot be hijacked by others.”

Ms Elphicke described the situation in the Channel as “nothing short of a crisis”, adding: “We need to do more to protect our borders and protect the vulnerable people who risk their lives to try to get here. They do so on the expectation that just as long as they make it to our beaches then they will never have to leave.That has got to change.”

She said that she trusted Ms Truss to “firmly solve our small boats crisis once and for all”.

Ms Truss’s campaign team says that her plans to double the Border Force’s maritime staffing levels would allow the UK to double the number of Channel patrols.

She also plans to appoint a single Home Office minister to oversee the Border Force, and explore all possible ways to turn around boats to deter migrant crossings.

Leadership rival Rishi Sunak last month unveiled a 10-point plan to “take back control” of Britain’s borders. He wants to tighten the definition of who qualifies for asylum, have Parliament set an annual cap on the number of refugees accepted, and to create a small boats taskforce.

Mr Sunak also wants to “hold the French to account with clear targets for stopping boats” and to ensure that “no adult who enters the UK illegally will have a route to remain in the country”.

He told GB News: “The plan I’ve set out is radical. I will do whatever it takes including any legal changes to make the Rwanda policy work, because we must have control over our borders.”

Asked if that meant the UK could leave the ECHR, he said: “Yes, no option should be off the table.” Last week the United

Nations High Commissioner for Refugees and the British Red Cross warned that “critical gaps” in the UK asylum system mean that peopleseeking safety – including those fleeing modern slavery – may be at risk of exploitation.

The organisations warned in a report that the “focus on immigration enforcement rather than identification and protection of victims means that opportunities to identify and address risks of exploitation are being missed”.

Polling for Migration Watch UK last month found 73 per cent of Conservative supporters favoured a reduction in immigration. The figure was 86 per cent for those who voted Tory in 2019 but no longer support the party.

The home affairs committee last month reported that “at least 166 people have died or gone missing in the English Channel since 2014”, with 27 people drowning on November 24 last year when their inflatable boat sank.