WASHINGTON — Earlier this week, Biden administration officials passed around with bemusement some words of praise from an unexpected source: Jared Kushner.

In an opinion essay for The Wall Street Journal, Mr. Kushner, former President Donald J. Trump’s son-in-law and adviser on Middle East issues, said that President Biden “did the right thing” and had “called Iran’s bluff” by refusing to make new concessions to lure Tehran into talks about restoring a nuclear deal abandoned by the Trump administration.

Mr. Kushner may have meant well, but his seal of approval compounded a problem for Mr. Biden by inflaming liberal allies already disappointed that his nuclear diplomacy with Iran had not made swifter progress.

“I would take this in the Biden White House as a giant, blinking red light that maybe what I’m doing is not right because Jared Kushner is finding ways to praise it,” said Benjamin J. Rhodes, a deputy national security adviser under President Barack Obama who worked closely on the 2015 nuclear agreement, speaking Wednesday on the “Pod Save the World” podcast.

Iran is just one of several foreign policy issues frustrating Mr. Biden’s base two months into his presidency. Although Mr. Biden delighted them with several swift actions — among them rejoining the Paris climate accord and withdrawing support for the Saudi-led war in Yemen — he triggered frustration by ordering an airstrike in Syria and declining to punish the crown prince of Saudi Arabia, Mohammed bin Salman, over the brutal murder of a dissident journalist and American resident, Jamal Khashoggi.

On Wednesday, Mr. Biden fueled the discontent when he conceded in an interview with ABC News that it would be “tough” to meet a May 1 deadline, set under the Trump administration, to withdraw troops from Afghanistan, a high priority for liberals impatient to end what they call “endless” American wars.

And more conflict may lie ahead on military spending, with Mr. Biden expected to propose few if any cuts to a Pentagon budget that swelled under Mr. Trump. Fifty House Democrats sent Mr. Biden a letter this week calling for a “significant” reduction.

After seeing Mr. Biden deliver a transformational $1.9 trillion stimulus bill, progressives are asking why his foreign policy feels so conventional. They worry that Mr. Biden and his largely centrist team of national security officials will disappoint the liberal wing’s desires for a new American foreign policy that relies far less on military power, de-escalates tensions with rivals like Iran and China, and places greater pressure — under threat of cooler relations — on allies like Saudi Arabia and Israel.

Biden administration officials dispute the criticism as unfair and premature.

One senior administration official said the Trump era created an unrealistic appetite for finger-snap action on complex issues, and that the longer arc of Mr. Biden’s policies would satisfy many frustrated liberals. The official spoke on condition of anonymity to discuss unofficial political considerations.

The official also pointed to several early actions by Mr. Biden welcomed by the left, including his returning to the climate deal, the World Health Organization and the United Nations Human Rights Council. Mr. Biden also reversed visa restrictions widely known as Mr. Trump’s “Muslim Ban,” announced an end to U.S. support for the Saudi-led military campaign in Yemen and has placed temporary new limits on drone strikes outside of combat zones.

Some prominent liberals call those moves welcome, but also low-hanging fruit, and say that on matters requiring harder trade-offs and political courage, Mr. Biden is too risk-averse. They worry that a 78-year-old president may recall too keenly the days when Republicans routinely enjoyed a political advantage on national security issues and Democrats gravitated to more conservative, militaristic policies to defend their right flank.

“I think that there is a lack of belief that the politics around some of these issues have actually shifted,” said Jeremy Ben-Ami, president of the Israel-focused, liberal advocacy group J Street. “There is a lot more political space open to this administration to pursue progressive policy than they think.”

The Middle East, which Biden officials hope to de-emphasize as they turn America’s attention to China, is the source of many complaints. Topping the list is Mr. Biden’s decision not to unilaterally rejoin the Iran nuclear deal by reversing harsh sanctions imposed on Tehran by Mr. Trump after he abandoned the agreement in 2018.

Iran says it will not talk, much less scale back its advancing nuclear program and comply with the deal’s limits, until Mr. Biden acts. 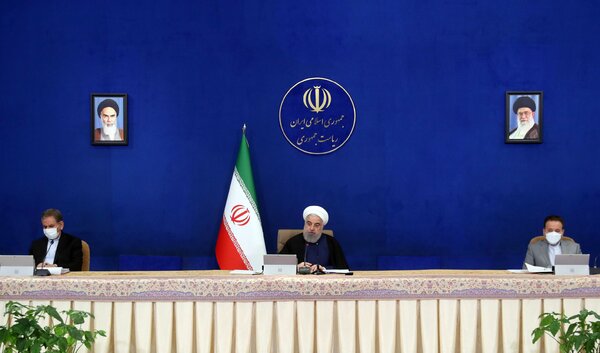 Supporters of the original deal, including Obama administration officials who helped to design it, say the passage of time only allows for political opposition to build at home and for events in the dangerous region to trigger an escalation.

They also complain that Mr. Biden is maintaining the sanctions Mr. Trump applied on Tehran when he exited the nuclear deal, even though Iran had been in compliance at the time. Mr. Kushner referred to this approvingly as a “strong hand” that Mr. Biden had inherited.

“The Biden administration has bought the Trump analysis that these sanctions give America leverage, even though the sanctions didn’t give Trump any leverage on Iran,” said Joseph Cirincione, a longtime arms control expert who consulted closely with Obama administration officials over the nuclear deal.

The strike also angered liberals determined to end what they call America’s “endless” or “forever” wars — its military and counterterrorism campaigns across the Middle East and parts of Africa that began after the attacks of Sept. 11, 2001. Senator Bernie Sanders, an independent of Vermont, said the strike “puts our country on the path of continuing the Forever War instead of ending it,” and he questioned its legal justification. (The White House says it supports congressional action to repeal and replace Bush-era laws that provide presidents with broad authority to use force.)

Compounding the frustration is a sense among liberals that Mr. Biden’s national security team is stocked with centrists who have supported past U.S. military interventions, including Secretary of State Antony J. Blinken, and the president’s national security adviser, Jake Sullivan.

Critics of Mr. Biden’s early Middle East policy have focused their attention on Brett McGurk, the National Security Council’s coordinator for the region. Mr. McGurk entered government as an aide in President George W. Bush’s White House, but stayed on through the Obama and Trump presidencies. He has strong relationships with leaders in Saudi Arabia and the United Arab Emirates — oil-rich states labeled repressive by human rights activists and that liberals see as exerting an unwelcome influence over U.S. policy.

Mr. McGurk helped shape Mr. Biden’s decision, decried on the left, not to directly punish Prince Mohammed even after the White House declassified an intelligence report that found that he, the de facto Saudi leader, approved the operation that led to the murder of Mr. Khashoggi in 2018. Many liberals said the moral imperative of barring Prince Mohammed from future visits to the United States, at a minimum, should outweigh the familiar realpolitik of preserving relations with the Saudi kingdom.

Some were encouraged by the prospect that Mr. Sanders’s foreign policy adviser, Matthew Duss, another Middle East specialist, would join the administration. But after job discussions with the State Department, Mr. Duss recently decided to remain on Mr. Sanders’ staff, telling the publication Jewish Currents that it was “the best place to keep working to support a progressive agenda.”

Even before that disclosure, many liberals complained that “the Biden foreign policy team includes no one who has been a clear and consistent opponent of our disastrous interventions across the world,” as Katrina vanden Heuvel, the former editor of the leftist Nation magazine, wrote in a Washington Post opinion column.

And as Mr. Blinken and Mr. Sullivan meet on Thursday and Friday with senior Chinese diplomats, some liberals also chafe at the Biden team’s hawkish stance toward Beijing, again warning that it has Trump-inflected confrontational tones and noting that Chinese cooperation is essential to fighting climate change. Among other things, Mr. Biden has not rolled back the stiff tariffs Mr. Trump placed on Chinese imports.

“I’ve been incredibly disappointed, though not shocked, that the Biden administration has leaned into the confrontational posture advocated by the foreign policy establishment,” said Kate Kizer, policy director for an anti-interventionist group, Win Without War. “More militarization and demonization is not the answer. Making deep investments in diplomacy and in building resiliency here at home is.”

Some Democrats are pressing the case for a huge diplomatic infusion. On Tuesday, a group of Democratic Senate and House members called for a $12 billion increase to the U.S. international affairs budget to fund diplomacy. And even more congressional Democrats are simultaneously calling for deep cuts to a Pentagon budget that grew by 20 percent under Mr. Trump, to $740 billion.

“We have so many domestic needs here at home,” said Representative Barbara Lee, Democrat of California.

Ms. Lee is also among those weary of extended deadlines for withdrawals from Afghanistan like the one Mr. Biden hinted at on Wednesday.

“We’ve got to bring our troops home,” she said, “and we’ve got to do that quickly.”