The two leaders will speak on Saturday ahead of the next round of wrangling over post-Brexit future relationship. They will discuss the “state of play on the EU-UK negotiations”, according to Mrs von der Leyen’s chief spokesman. And a UK Government spokesman said: “The Prime Minister will speak to European Commission President Ursula von der Leyen tomorrow afternoon to take stock of the UK-EU negotiations.”

Britain doesn’t expect the video-call to usher in a last-minute compromise as both sides head towards a no-deal Brexit.

Negotiations broke up earlier this week without any significant breakthroughs on the key sticking points.

Chief negotiators Lord Frost and Michel Barnier both said there were “divergences” still to overcome on access to Britain’s fishing grounds and future common standards. 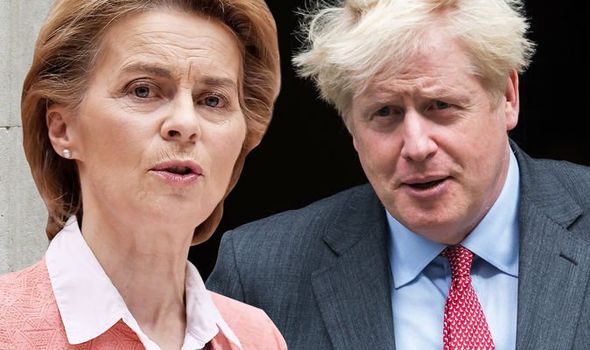 The pair are due to meet in London on Sunday to pick the talks back up after a short hiatus.

During the lull, work continued between senior members of the negotiating team on a legal text for future plans to police any Brexit agreement.

Related posts:
Hot News
Matt Hancock in thinly veiled swipe at Andy Burnham as Manchester goes into Tier 3
London and Liverpool go into Tier 2 as Manchester hit with highest restrictions
Chinese ‘concerns’ as military build-up in British Antarctica Territory exposed by expert
A Fight Over Agriculture Secretary Could Decide the Direction of Hunger Policy
‘Social outcast’ behind $17 million dark web drug syndicate
Recent Posts
This website uses cookies to improve your user experience and to provide you with advertisements that are relevant to your interests. By continuing to browse the site you are agreeing to our use of cookies.Ok