The government tried repeatedly for more than a year and a half to get the former president to give back documents from his time in office. Finally, it resorted to a search of his property. 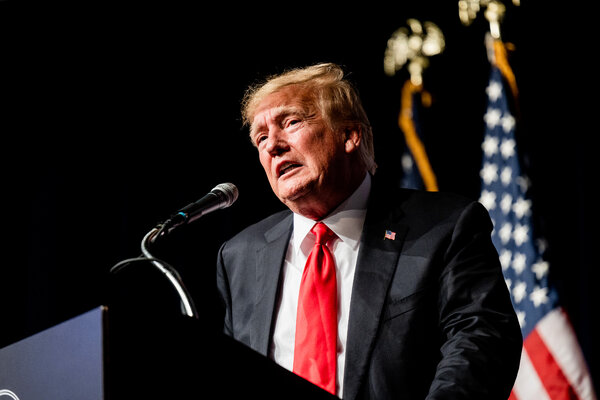 WASHINGTON — The National Archives and the Justice Department tried and failed repeatedly for more than a year and a half to retrieve classified and sensitive documents from former President Donald J. Trump before resorting to a search of his Mar-a-Lago property this month, according to government documents and statements by Mr. Trump’s lawyers.

The documents, including an unsealed, redacted version of an affidavit from the Justice Department requesting a warrant to conduct the search, make clear the lengths to which the government went before pursuing a law enforcement action to recover the material.

Here’s a timeline of the events that led to the search.

Talks begin between the National Archives and Trump.

The Trump White House begins having conversations about transferring presidential records to the National Archives, as required by the Presidential Records Act.

Notes from conversations among White House staff members indicate that there are discussions about material that Mr. Trump had been amassing, and how to get it back and make sure the documents are properly handled.

Mark Meadows, Mr. Trump’s chief of staff, tells others he will take care of it, according to people familiar with the matter, but it is unclear whether he ever talks to Mr. Trump.

The move to Mar-a-Lago begins.

Two days before Mr. Trump is to leave office, at least two moving trucks are spotted at Mar-a-Lago, his club and residence in Palm Beach, Fla.

Mr. Trump leaves the White House for Mar-a-Lago on Jan. 20. Photographs show boxes of material leaving with him, although those boxes are only a portion of what ultimately made it there.

Gary M. Stern, the archives’ general counsel, emails Mr. Trump’s representatives — the lawyers Patrick F. Philbin, Michael Purpura and Scott Gast — saying that the government had discovered that the original correspondence with Kim Jong-un, the North Korean leader, was missing, as was a letter that President Barack Obama had left for Mr. Trump at the White House upon leaving office.

Mr. Stern, sounding impatient, says that Pat A. Cipollone, the former White House counsel, identified roughly two dozen boxes of material that had been in the White House residence but was never transferred to the archives. It was not clear whether he meant Mr. Cipollone specifically or his office. Nonetheless, Mr. Stern asks for help getting all the material back.

Explore Our Coverage of the Trump Investigations

According to the affidavit, the archives continued to make such requests for months.

Mr. Gast sends Mr. Stern a note indicating that Mr. Trump will return correspondence with the North Korean leader and asks how to proceed. Another archives official recommends that the letters be sent by FedEx, to which Trump aides object. The letters are not returned.

Mr. Trump shows off the letters from Mr. Kim, waving them at people in his office, where some boxes of material from the White House are being stored. Mr. Meadows, contacted by Mr. Philbin in an effort to facilitate the return of materials from Mar-a-Lago, talks to Mr. Trump about the documents at the club during a visit there. The conversation is brief, and it is not clear how aggressively Mr. Meadows pursues the issue.

Mr. Trump’s representatives to the archives are still engaged with the agency over unrelated records.

Officials at the archives warn Mr. Trump’s representatives that there could be a referral to the Justice Department or an alert to Congress if the former president continues to refuse to comply with the Presidential Records Act.

Mr. Trump’s advisers are concerned about who can go through the documents held at Mar-a-Lago, because appropriate clearances are needed to review classified material and it is not immediately obvious what is in them. Mr. Trump ultimately goes through the boxes at the club himself, although he appears not to have gone through them all.

In late December, Mr. Trump’s lawyers inform the archives that they have found 12 boxes of documents at Mar-a-Lago and that they are ready for retrieval.

Officials from the archives retrieve 15 boxes containing presidential records and other sensitive material, along with various news clippings and other miscellanea. According to the Justice Department, the documents “appear to contain national defense information,” sometimes called N.D.I., which is protected by the Espionage Act.

The archives makes a public statement about Mr. Trump’s record-keeping practices, noting that some of the records it received at the end of his administration “included paper records that had been torn up by former President Trump.”

About a week later, the archives issues another public statement about retrieving documents from Mar-a-Lago, asserting that Mr. Trump still has presidential records that should have been turned over to the archives at the end of his time in office.