Jenna Ellis broke into the legal profession in 2012 as a deputy district attorney in Weld County, Colo., a largely rural area that would soon make headlines for a failed attempt to secede from the rest of the state because some residents resented the growing dominance of more liberal communities to the south like Denver. Ms. Ellis prosecuted crimes like theft and assault, felonies of a different magnitude from the claims of sweeping fraud and criminal conspiracy she makes today as a top lawyer to President Trump.

It wasn’t long before she parlayed her law degree and experience as a prosecutor into jobs that thrust her beyond her corner of the state: She took a position with James Dobson, the evangelical heavyweight, joined the faculty at Colorado Christian University and started appearing on Denver radio as a legal commentator.

By late 2018, regular viewers of cable news would come to know Ms. Ellis as a “constitutional law attorney” — her preferred title — who aggressively came to Mr. Trump’s defense as he faced investigation and impeachment.

But a review of her professional history, as well as interviews with more than a half-dozen lawyers who have worked with her, show that Ms. Ellis, 36, is not the seasoned constitutional law expert she plays on TV.

In many ways, that makes her ideal for the role she has now fashioned for herself: She is a star player in the president’s theater of grievance and denial whose lack of relevant experience with the legal questions at hand has had no apparent bearing on her ability to present herself as someone of great authority.

Since she graduated law school in 2011, nothing in her record in the courtroom — limited mostly to appearances in state court as a prosecutor or as counsel for clients charged with assault, prostitution, theft and domestic abuse — shows any time spent litigating election law cases.

She holds herself out as an expert on the Constitution based on her self-published book and her teaching of pre-law classes to undergraduates. She has never appeared in federal district or circuit court, where most constitutional matters are considered, according to national databases of federal cases, and does not appear to have played a major role in any cases beyond her criminal and civil work in Colorado.

On paper, the Trump campaign calls her a senior legal adviser. She has recently appeared alongside Rudolph W. Giuliani and other Trump lawyers — a group Ms. Ellis described as an “elite strike force team” — at public hearings where she amplified the president’s false claims of widespread voter fraud.

Ms. Ellis’s work appears to largely be in a public relations capacity. The Trump campaign and its supporters have so far filed about 50 election-related lawsuits. She has not signed her name or appeared in court to argue a single one.

In a written statement responding to questions about her record, Ms. Ellis described herself as “a highly experienced and highly qualified attorney and expert in my field.” Any assertions to the contrary “cast me in a false light,” she said. The Trump campaign provided the name of one federal case in which it said Ms. Ellis had participated, in 2012, when she was a year out of law school. But her name is not among the lawyers listed in the decision, and the case was not heard in a regular federal court, but rather in an administrative tribunal.

It has been a month since Election Day. In the weeks since, as Mr. Trump has refused to bow to the reality of his defeat, his fruitless attempts to persuade federal judges and state officials to undo the results have introduced the nation to a once-obscure cast of lawyers, legislators and local elections commissioners. Ms. Ellis is a natural in her newly prominent role.

She has been front and center at several public sessions with Mr. Giuliani over the past week. Convened by pro-Trump Republican lawmakers, they serve no legal purpose and are essentially scaled-down political rallies for the president to vent his frustrations. At one last week in Pennsylvania and another on Monday in Arizona, the president called Ms. Ellis’s cellphone and she held it near a microphone so the crowd could hear him speak.

“I find it astonishing that she’s gotten to this point,” said Stephanie Stout, a lawyer in private practice in Greeley, Colo., who worked with Ms. Ellis a few years ago defending a man who was accused of attempted murder. The partnership was short-lived, Ms. Stout said, because their client fired Ms. Ellis, deeming her not up to the job.

“She just didn’t have the legal chops,” added Ms. Stout, who ultimately won the case on her own. “After that, Jenna decided that I had stolen the case from her.”

The president’s legal efforts to overturn the election have slowly petered out. Mr. Trump and his Republican supporters have already lost or withdrawn from nearly 40 lawsuits, leaving only a handful of cases still alive in courts across the country — and, of course, the very unlikely scenario that the Supreme Court will step in to save him.

Lawyers who worked with Ms. Ellis said that she was not the kind of attorney they believed would be particularly helpful to this or any president in these endeavors, given her background. 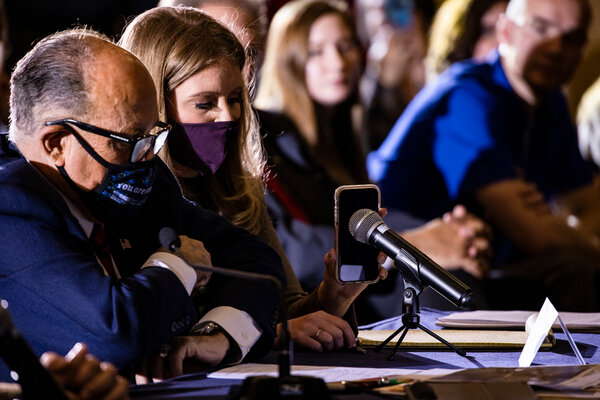 Craig Silverman, a lawyer in Denver who used to host a radio show on legal matters and current events that Ms. Ellis occasionally appeared on, described her as “an attorney of scant accomplishment.” The cases she discussed with him, he recalled, were bread-and-butter criminal defense work. And he said he had always expected her to pursue a career in teaching and media — not the law.

Then Mr. Silverman read the news last year that Mr. Trump had made her a senior legal adviser to his campaign.

“When I saw ‘senior legal adviser,’ it was like, ‘Wow,’” he said. “To have a title like that,” he added, “nobody knew her to be that type of lawyer.” Though Mr. Silverman once considered himself friendly with Ms. Ellis, he said her insistence of widespread voter fraud had so unnerved him that he believed she might have violated Colorado’s rules of professional conduct for lawyers, which prohibit making false statements.

Ms. Ellis went to work for at least three private law firms in Northern Colorado after leaving the district attorney’s office in 2013. Her professional biographies at the time cited her experience in landlord-tenant disputes and cases involving immigrants who accepted plea deals without being advised of the consequences.

Some colleagues came away impressed. “No matter what anyone thinks of her, my experience was that she was a brilliant lawyer,” said the founder of one of the firms, Brandon Marinoff. Mr. Marinoff said Ms. Ellis was with his firm for less than a year before moving on to a higher-paying job.

In 2015 she joined Colorado Christian University as an affiliate faculty member and published her book, “The Legal Basis for a Moral Constitution: A Guide for Christians to Understand America’s Constitutional Crisis,” in which she lamented how the country had lost its way.

In other writings, she has reserved a particular disdain for the gay and transgender communities. In 2016, for instance, she referred to gay people on Facebook as “sinners” whose “conduct is vile and abominable.”

Colorado Christian does not have a law school or a program in constitutional law. Ms. Ellis taught pre-law and political science to undergraduates and was part of the team that developed and advised a moot court program, according to a university spokesman. Eventually she was made an assistant professor of legal studies — but never a “professor of constitutional law,” which is how she identified herself in pieces for The Washington Examiner that she started writing in 2017.

She left teaching in 2018 to become the director of the Dobson Policy Institute, a small outfit in the evangelical empire of Mr. Dobson, who founded the socially conservative, Colorado Springs-based group Focus on the Family.

Her affiliations with The Examiner and the Dobson name helped her branch out from local radio to Fox News, where she appears to have first caught the eye of the president.

A graduate of the University of Richmond law school, Ms. Ellis did not have the Ivy League, white-shoe credentials that typically impress Mr. Trump. But she did have an attribute that can carry just as much weight in his eyes: the ability to go on television and deliver scathing attacks on his critics.

Ms. Ellis beat the drum for the president on cable and wherever else she had a platform. She issued statements from the Dobson Policy Institute praising the administration’s “dedication to the rule of law” as Mr. Trump fanned fears about a migrant caravan moving through Mexico.

Mr. Trump liked what he saw. In August 2018, he posted to his Twitter account a claim Ms. Ellis had made on Fox News about bias in the F.B.I. He formally brought her on board as a campaign adviser in November 2019.

As part of a presidential campaign with such a diffuse power structure, Ms. Ellis did not have much responsibility beyond her media appearances. But aides said that she did reinforce some of Mr. Trump’s instincts, such as when she urged him to use the National Guard more aggressively against demonstrators over the summer.

She has also gone to battle for him on Twitter. She was widely condemned after she reacted to the news that Senator Kamala Harris of California would become Joseph R. Biden Jr.’s running mate by saying that Ms. Harris’s voice “sounds like Marge Simpson.” She even drew a response from the creators of “The Simpsons,” who made a short video in which Marge scolds Ms. Ellis, saying, “I teach my children not to name call, Jenna.”

But those who know Ms. Ellis said they imagined that her willingness to say almost anything in the president’s defense was what he found appealing about her.

Mr. Silverman, the Denver lawyer who knew her from his radio show, said that as a former prosecutor himself, he found what Ms. Ellis had done with her law career outrageous, but that he could see her utility to a president who does not let facts get in his way.