The House vote was bipartisan, but many Republicans object to new gun restrictions on domestic abusers that could complicate Senate passage. 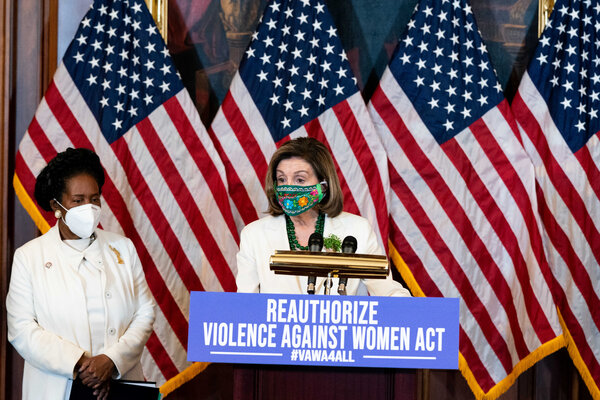 The House moved on Wednesday to renew the Violence Against Women Act, adding firearm restrictions for convicted domestic abusers and other new provisions to a landmark law that has helped combat domestic violence, sexual assault and stalking but expired in 2019.

President Biden, who wrote the law into existence as a senator in 1994, has made strengthening it one of his top domestic priorities during his time in office, and Wednesday’s vote was the first significant step toward putting it back into effect after lapsing under President Donald J. Trump. The law’s renewal has taken on added urgency amid alarming increases in domestic violence during the coronavirus pandemic.

The House’s 244-to-172 vote was bipartisan, with 29 Republicans joining united Democrats to approve the bill. But substantial conservative opposition to a measure that has enjoyed broad backing from both parties in the past foreshadowed a more difficult path ahead in the Senate, where Democrats control just 50 of the 60 votes necessary for passage.

Much of the House’s proposed update to the Violence Against Women Act, commonly known as VAWA, is noncontroversial. It would build on a patchwork of programs like violence prevention and housing assistance for abuse victims, reaffirm legal protections for victims and their families, and more aggressively target resources to minority communities.

In an effort to expand the law’s reach, however, Democrats have also included provisions tightening access to firearms by people convicted of a violent crime or subject to a court order, and expanding protections for gay, bisexual and transgender people. In an attempt to cut into high rates of domestic violence against Native American women, their bill would also grant tribal courts new authority to prosecute non-Indians for sex trafficking, sexual violence and stalking.

“This bill opens the door of the armor of the federal government and its protection of women who continue to lose their life and men,” said Representative Sheila Jackson Lee, Democrat of Texas and one of its principal authors. “Yes, it is a culturally sensitive initiative that protects immigrant women, it protects Native Americans, it protects poor women.”