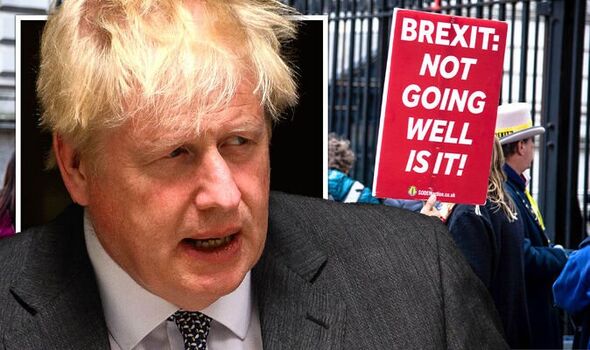 You can add your voice to the tens of thousands of comments posted daily on Express.co.uk and have your say on the big issues facing the country today.

Express readers have accused the Prime Minister of using Brexit for his own gain as the Government retreads its argument with the EU over the Northern Ireland Protocol.

Boris Johnson and Foreign Secretary Liz Truss have introduced legislation that would unilaterally overhaul parts of the protocol, a move condemned by most Northern Irish legislators in a letter this week.

Britons, however, believe the move is designed only in the interest of the Prime Minister, who gains “traction” by instigating fights with the EU while the bloc attempts to accommodate him.

Express reader llama posted: “The EU has bent over backwards to be accommodating, but Johnson sees more traction in keeping up a permanent fight with them. It’s all he has.”

Writing in a column for Irish publication The Journal, Mr Nash said the chances of the Government passing its Northern Ireland bill are minimal “while competing factions try to extract a pound of flesh from a fatally wounded Prime Minister”. But what do you think, does the PM actually want the best for Brexit or is he trying to save his job?

HAVE YOUR SAY RIGHT NOW – JOIN THE EXPRESS READER DEBATE IN OUR COMMENTS SECTION.