Tory leadership: We ask the public's opinion on Tory contest

Nancy was one among several Britons to share their views on the Tory leadership race with Express.co.uk. While bluntly dubbing Sir Keir Starmer the reason she isn’t voting Labour, saying she doesn’t trust him, the Londoner suggested she would not have made Mr Johnson quit.

Speaking from Lewisham, Nancy said: “He liked the job. He was good at it. He gives you a giggle.

“He was a bit of an idiot but he was okay.

“He got Brexit done. He has done what he said he would do.”

As Rishi Sunak and Liz Truss battle for the keys to No10, Mr Johnson has all but disappeared from the spotlight, with a new study showing Conservative voters are divided on his resignation. 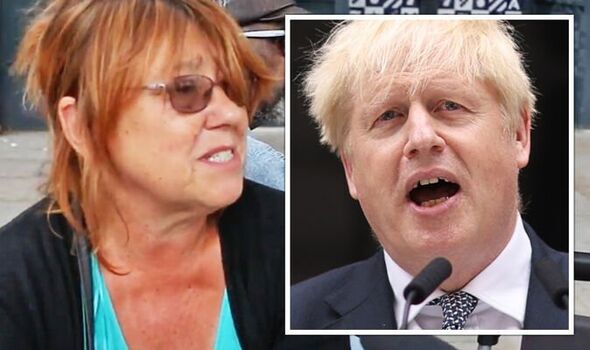 According to a poll of 2,500 people who gave their views on his departure, about half of Tory voters think Mr Johnson should not have quit.

But the survey, conducted between July 21 and 26, revealed that around the same proportion think he was right in doing it.

Meanwhile, among a mixture of Conservative and Labour voters, 70 percent thought Mr Johnson should have quit as Tory leader, against 21 percent who thought he should have stayed.

James Frayne, Founding Partner of Public First, which carried out the research, said the figures came as no surprise.

He said: “Boris was elected on an extremely popular manifesto, laser-focused on the lives of ordinary people.

“It’s unsurprising so many Tory voters have stayed loyal to the project Boris kicked off, and it’s a reminder the two leadership candidates should be wary of tossing this aside.”

Boris Johnson should be on Tory member ballot says MP

Luke Tryl, UK Director of More in Common, which commissioned the poll, said: “While many think Boris Johnson was right to step down, it’s not true to say he’s without fans.

“Our polling reveals Tory voters are split on his resignation, with almost half saying he should not have been forced to step down.

“The results also show a positive view of his legacy, including his handling of Covid and Ukraine, with his strongest supporters still to be found among Red Wall voters.”

The petition is being championed by the Tory donor Lord Peter Cruddas and the former MEP David Campbell Bannerman.

Lord Cruddas said: “This confirms what we are hearing from party members through our survey. A lot of party members do not want Boris Johnson to resign.”

The petition on the Conservative Post website claims it has “racked up more than 10,000 member signatures in just a week” and that signatories are “required to enter proof of membership in order to sign the petition, which is then immediately sent to the Conservative party chairmen Ben Elliot and Rt Hon Andrew Stephenson MP”.

The poll led supporters of Mr Johnson to claim one in 10 Tory members support his reinstatement as Prime Minister or for his name to be put on the ballot paper.

However, after the party’s headquarters found fewer than half of a sample of signatories were party members and amid claims that some people on social media had entered false identities, the petition is in the process of being verified.

The authors of the petition said addresses and membership numbers provided by the signatories are undergoing stringent checks and that Conservative campaign headquarters (CCHQ) has not yet received the vast majority of the signatories.

The website Conservative Post, which organised the petition, said it was being overseen by a team of experienced professionals.

Senior Tory sources said on Monday Mr Johnson “does not support any campaign to put him on the leadership ballot and will back whoever is the next leader”.