A record 1,295 migrants arrived in the UK on Monday after crossing the Channel, according to Government figures. It is the highest daily total since current records began in 2018. Some 27 boats made the journey, the provisional Ministry of Defence (MoD) data said, which suggests an average of around 48 people per boat.

More than 22,600 people have arrived in the UK after navigating busy shipping lanes from France in small boats such as dinghies so far in 2022, according to the figures.

The numbers continue to fuel a diplomatic row between Britain and France, with the Hauts-de-France prefecture claiming London still ons some €10 million (£8.4 million) to Paris for patrol boats and surveillance equipment.

They told The Times: “The difficulties are compounded by the fact that the British are not reimbursing the expenditure undertaken to contribute to the protection of the border as well as the security of the migrants.

“Several million euros are owed to France by GB as of today, including almost €10 million to pay for the reserve gendarmes and the airborne surveillance. 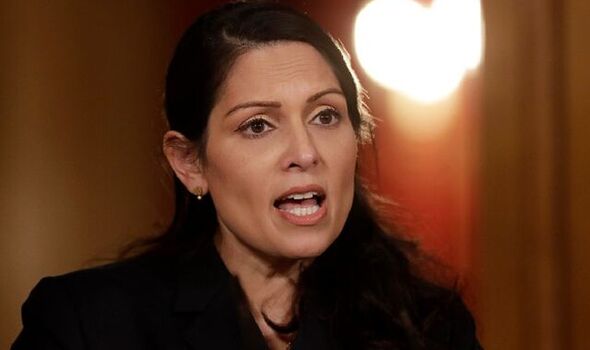 “Despite this, more than 60 per cent of the attempted crossings have been stopped since the start of 2022.”

Home Secretary Priti Patel agreed deals with France worth £80 million for the past three years.

Home Office sources disputed the French claims when asked by The Times.

They said the UK would honour “every last penny” agreed in Priti Patel’s deals.

A spokesman said that “our work with the French is vital”.

So far in August 6,271 people have been recorded making the crossing.

This is already higher than any monthly total for the year so far.

Crossings continued on Tuesday amid breezy conditions in the Channel, with more than 100 people estimated to have arrived.

Around 80 people, including several young children, were seen being rescued by the Border Force cutters, Hurricane and Defender, before being brought ashore in Dover, Kent, during the afternoon.

Scores of other people are thought to have also made the crossing earlier in the day.

Lucy Moreton, from the ISU union which represents Border Force officers, said the weather was the short-term reason behind the high numbers of crossings.

She told the PA news agency: “The short term answer is the weather.

“It has been flat calm yesterday and is still fairly calm today.

” However, autumn is approaching and although crossings do not stop they do become less frequent as the wave height increases.”

Ms Moreton said it was “possible” the preceding three-day hiatus from crossings, thought to be down to unsuitable weather conditions over the weekend, could be behind the surge in numbers on Monday. 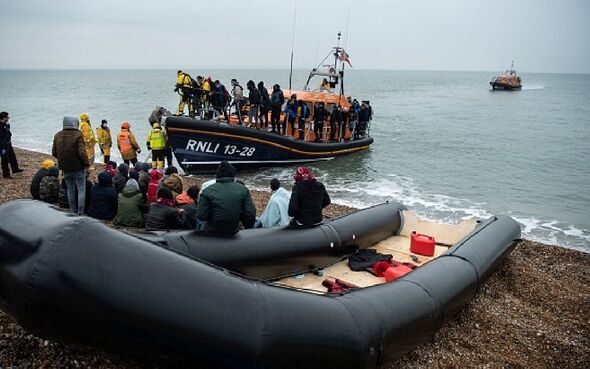 A government source told The Times smugglers may be trying to clear a “backlog” of people who had been waiting to make the journey.

But Ms Moreton said the crossing had also become a “relatively safe and effective route of illegal migration into the UK”, adding: “It is far more certain that trying to hide in a lorry.

“Because the sea response is so effective there has been minimal loss of life; it isn’t seen as a dangerous thing to do.

“The prospect of being sent to Rwanda is not a deterrent at all; if anything it is encouraging crossings as smugglers encourage migrants to travel now before the policy comes in.”

It is four months since Home Secretary Priti Patel unveiled plans to send migrants to Rwanda in a bid to curb Channel crossings.

Since then, 17,402 people have arrived in the UK after making the journey.

On April 14, Ms Patel signed what she described as a “world-first” agreement with Rwanda under which the east African nation will receive migrants deemed by the UK to have arrived “illegally” and therefore inadmissible under new immigration rules.

But the first deportation flight, due to take off on June 14, was grounded amid legal challenges.

Several asylum seekers, the Public and Commercial Services union and charities Care4Calais, Detention Action and Asylum Aid are challenging the legality of the Home Office policy, with the next court hearings due in September and October.

Chief executive of the Refugee Council Enver Solomon said it was clear the Rwanda plan was “doing absolutely nothing to stop people feeling forced to cross the Channel” because it fails to address the reasons behind the journeys.

Steve Valdez-Symonds, Amnesty International UK’s refugee and migrant rights director, said: “The simple truth is that people including children fleeing war and persecution will continue to make these perilous journeys, whether by boat or other means, if the Government refuses to provide safe routes for them.”

A Government spokesman said preparations to put the Rwanda policy into practice were continuing, adding: “The rise in dangerous Channel crossings is unacceptable. Not only are they an overt abuse of our immigration laws but they risk the lives of vulnerable people, who are being exploited by ruthless criminal gangs.”

Speaking to broadcasters ahead of a Conservative Party leadership hustings in Birmingham, Rishi Sunak said: “I will do whatever it takes to make the Rwanda plan work because we must have control of our borders and as prime minister that is what I will deliver.”