The Democracy Institute/ Express.co.uk tracker poll has shown that more than half (52 percent) of Americans back a trade deal with the UK despite Joe Biden’s administration lack of support for pressing ahead with one. It comes as 20 individual US states have signed their own trade agreements with Britain because of a lack of action from the federal government.

However, with the Irish lobby still holding a lot of power within the ruling Democratic Party, briefings against Britain led by House Speaker Nancy Pelosi have had an impact on support for a trade deal in relation to the Northern Ireland question.

The monthly tracker poll showed that support for a free trade deal with the UK fell by six points to 46 percent if concerns over Northern Ireland were raised.

This follows relentless attacks on the UK by Ms Pelosi and other Democrats in Britain’s bid to prevent the EU’s land grab over Northern Ireland.

Ms Pelosi earlier this year was accused by sources close to Northern Ireland secretary Brandon Lewis of being “fundamentally ignorant” about the Province.

It followed her threat to veto any trade deal with the UK if it tried to fix the controversial Northern Ireland protocol with the legislation which was passed before the summer. 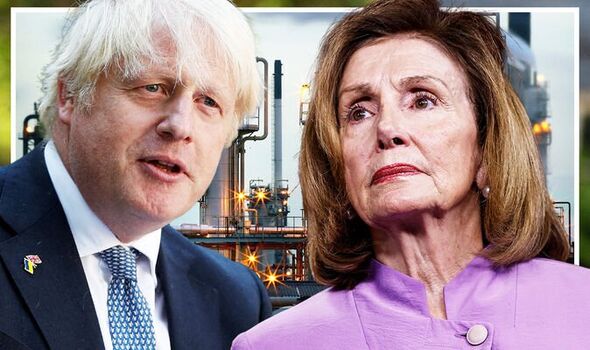 Speaking in a video interview with Express.co.uk (above), Patrick Basham, Director of the Democracy Institute said that the impact of the Northern Ireland question arises because Democrats are now more supportive of free trade deals than Republicans.

In the past, he explained, Republicans were historically less protectionist but in recent years it has reversed.

This was behind Donald Trump cancelling trade talks with the EU and withdrawing from the Comprehensive and Progressive Trans Pacific Partnership (CPTPP) trade deal with countries like Japan and Australia.

Mr Basham said: “The default position for Americans over a trade deal with the UK is to be mildly, moderately positive and optimistic. 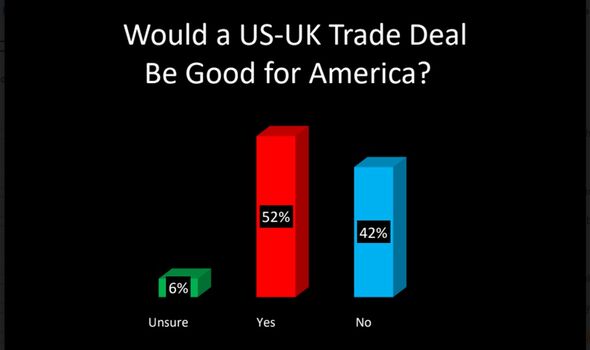 “That’s partly because a lot of Americans are still largely in favour of free trade deals.

“Also there is the affinity and reservoir of good will towards the UK, it’s principle ally.

“If you are going to pluck a country out and suggest that America might have a trade deal you do worse in every case other than the UK.”

He went on: “The fact that the figures for such a trade deal are not off the chart reflects the fact that Americans are more cynical about trade deals than they were.

“There has been a flip on American side. It wasn’t that long ago that the opposition to free trade was very much on the political left, the protectionist pro tariff labour unions and politicians who represented them.

“Free market and big business types on the right were in favour.”

POLL: Should next PM hold a general election immediately? [REACT] 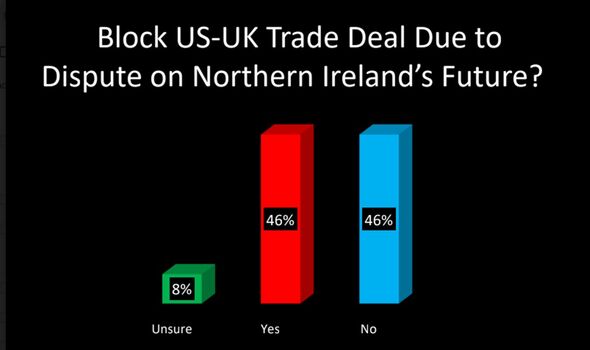 “That has changed now because you have populist Trump type blue collar voters on the right who are very much more sceptical of these deals.

“You have now the Democrat affluent whites who now consider themselves liberals, they are more in favour of trade deals and internationalists.”

On Northern Ireland he said that “it is a real challenge and hurdle to overcome”.

He said: “What we see is the tremendous affinity a good section of Americans have, types like Nancy Pelosi.

“So, there is no question that those who would support a trade deal with the UK, if they think Northern Ireland in their view is going to be harmed in some way, will change their attitude.

“When we get to the nitty gritty of a trade deal, Northern Ireland is going to be part of the discussion.”

The Democracy Institute polled 1,500 likely voters across the USA on August 2 to 4.