WASHINGTON — In December 2004, Lisa M. Montgomery murdered a pregnant woman in Skidmore, Mo., and abducted the unborn child to claim as her own. The only woman on federal death row, she is scheduled for execution on Tuesday, and her defense team does not contest her guilt.

But her high-profile case — she would be the first woman to be executed by the federal government since 1953 — has focused new attention on whether a defendant’s full life experience should factor into sentencing, with her supporters arguing that she was a victim of long-running sexual abuse and torture who was driven to desperation.

On Friday, her lawyers asked the court to declare her incompetent in an effort to block her execution, citing serious mental illness, neurological impairment and complex trauma. The Supreme Court has found that executing the “insane” is unconstitutional.

Ms. Montgomery, 52, is one of the last three of 13 people that the Trump administration has executed or scheduled for execution since resuming federal capital punishment last year, after a 17-year moratorium. A federal judge issued a preliminary injunction on Friday in another case blocking the remaining federal executions unless the government initiates certain measures to protect against spread of the coronavirus; however, the judge did not require the government to submit evidence of its compliance before the scheduled executions.

The Supreme Court has been unreceptive to attempts to stop any of the earlier executions.

Ms. Montgomery’s crime was especially heinous. Beforehand, she had told others, including her husband, that she was pregnant, although she was infertile at the time, the Justice Department said in a court filing. Using the alias of Darlene Fischer, she contacted Bobbie Jo Stinnett, who operated a dog breeding business, and expressed interest in purchasing a puppy. Sometime during her visit, Ms. Montgomery strangled Ms. Stinnett, extracted the fetus and fled with it.

The baby lived. In December, around the child’s 16th birthday, Ms. Stinnett’s widower, Zeb Stinnett, sent a message to thank Randy Strong, now the Nodaway County sheriff in Missouri, for what he did for the family years ago. At the time, Mr. Strong was a detective on the case who surveyed Ms. Stinnett’s body after the crime and coaxed Ms. Montgomery into admitting her guilt. 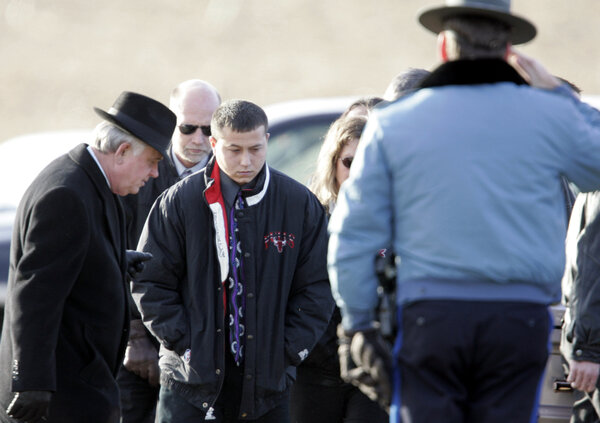 He had planned to witness to Ms. Montgomery’s execution, but he is not permitted to do so during the pandemic, he said. Even if he cannot be there to witness it, he said, “I want to see it done.”

Ms. Montgomery’s defense team has sought to portray its client as a victim of sexual abuse, one whose story is a testament to the failures of the systems intended to protect her and who should not be executed for her crime.

Celebrities like Scarlett Johansson have joined the call for President Trump to commute Ms. Montgomery’s sentence. In a clemency petition, her defense team argued that the president now had “the power to send a message to the thousands of women who have been the victim of childhood rape and trafficking that their pain matters — that they matter — that their lives have value.”

The defense team said Ms. Montgomery’s abuse began early in her childhood. Her first full sentence was “don’t spank me, it hurts,” her mother recalled to a mitigation specialist years ago, according to a document provided by her defense team.

During her childhood, a man raped her half sister, Diane Mattingly, while Ms. Montgomery was in the room, Ms. Mattingly recalled.

After the state removed Ms. Mattingly from the home, Ms. Montgomery endured repeated sexual abuse at the hands of her stepfather, and her mother required that she “pay the bills” by engaging in sexual acts with various repairmen, a clinical psychologist said in a court declaration filed by the defense team. When Ms. Montgomery told a cousin in law enforcement about the assaults, she begged him not to report the abuse because she feared her stepfather would kill her.

Lifelong trauma is not uncommon for those on death row. But Ms. Montgomery’s case is unusual, in part because she is one of relatively few women on death row across the country and the only one facing execution by the federal government. Women comprise about 2 percent of those on death row but commit about 10 percent of murders, according to Robert Dunham, the executive director of the Death Penalty Information Center.

Ms. Montgomery’s federal execution would be the first of a woman since Bonnie Brown Heady was put to death in the gas chamber for kidnapping and murder and Ethel Rosenberg was electrocuted for espionage, both 68 years ago.

Mr. Dunham said Ms. Montgomery’s trial lawyers had failed to adequately present the mitigating factors that might sway the jury from a death sentence. A judge removed Judy Clarke, a prominent death penalty lawyer who had helped win life sentences rather than capital punishment for some high-profile defendants, from the Montgomery case after arguments among the defense team, according to a court declaration from Ms. Clarke. In a handwritten note, Ms. Montgomery said the removal of her trusted lawyer was a “devastating blow.”

President Trump has discussed potential pardons that could test the boundaries of his constitutional power to nullify criminal liability. Here’s some clarity on his ability to pardon.

Hot News
Colorado lottery winner: Unclaimed $150,000 ticket from Windsor King Soopers is about to expire
where to buy generic diabecon canadian pharmacy without prescription
cheap robaxin nz without prescription
Opinion | Thank You, Dr. Fauci
N.Y.C. has a parking problem: few spots for bikes.
Recent Posts
This website uses cookies to improve your user experience and to provide you with advertisements that are relevant to your interests. By continuing to browse the site you are agreeing to our use of cookies.Ok