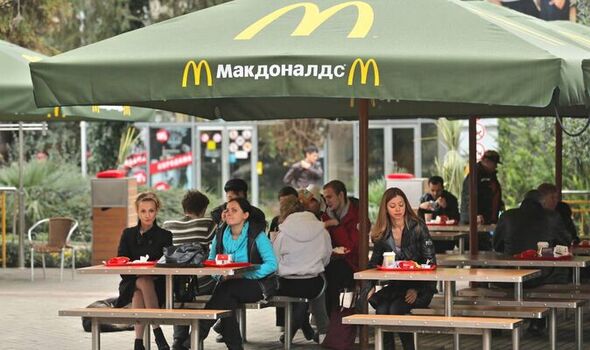 Sir Iain said last night: “All Western-based companies should withdraw from Russia in response to the atrocities committed.”

“There are far too many international companies that have yet to break their links with Russia; they should pull out now.”

The Daily Express is backing the call today with our Take A Stand Against Russia crusade. We are urging firms to sever links with Putin’s regime as part of the Western sanctions drive.

Tory MP Alexander Stafford called it an “absolute disgrace” if firms are not reviewing Russian investments and operations.

Asked how he felt that so many had yet to take action, he said: “I find it incredibly disappointing. We cannot prop up an awful dictatorial regime which has invaded an innocent country.”

Major firms such as H&M, Nike and Apple last week suspended Russian operations. And last night Netflix said it was suspending its service in Russia.

But other major firms are still trading as normal.

Tory Sir John Hayes urged such firms to “do the right thing”. He said: “Corporate businesses need to show they have real authority by putting ethical concerns above their commercial interests.”

Brand expert Catherine Shuttleworth said multinationals with Russian operations will be looking at how to manage their operations in terms of commercial and reputational risk. She said: “Many who operate through third party franchise partners and distributors are unable to just shut up shop and leave.”

“However as the impact of the conflict deepens, consumers will expect brands to react. It is likely we will see more statements from brands in the coming days that they are suspending operations.”

Richard Lim, CEO of Retail Economics, said: “Those companies seen to be putting profits before their perceived social values run the risk of being boycotted.” McDonald’s, with more than 850 Russian outlets, has been lashed on social media. Other chains have been threatened with boycotts.

American Express said yesterday it was suspending operations in Russia and Belarus, following a similar move on Saturday by Visa and Mastercard. Ikea closed its 17 Russian stores. Co-op, Morrisons and Sainsbury’s have stopped selling Russian vodka.

Spotify has shut its Russian offices.

Accountancy giant Pricewaterhouse Coopers (PwC) is reportedly cutting its Russian arm adrift. An internal memo from chairman Bob Moritz said due to the invasion “PwC should not have a member firm in Russia”. A Burger King spokeswoman said its 800 Russian restaurants are “owned by local franchisees and not company-owned”. She added: “We support sanctions… and will insist our franchisees in Russia abide by those.”

All the other companies mentioned were contacted for comment.

Margaret Thatcher famously said of the reformist Soviet leader Mikhail Gorbachev that he was “a man we can do business with”.

But in the wake of the barbarous invasion of Ukraine, Vladimir Putin is a man with whom no self-respecting Western company should be conducting any business whatsoever, no matter how lucrative.

To maintain a link with this monster’s regime is morally repugnant. In effect, a British firm that still trades with Russia is helping to prop up the most savage tyranny seen in Europe since Adolf Hitler. Putin has made himself a pariah on the world stage. Enterprises that continue to operate in Russia are providing him with the cash that pays for the shells that fall on innocent civilians, the bombs that rain down on housing blocks, the bullets that kill children.

Any profit that comes to a UK firm is blood money and could be described as the “proceeds of war crimes”. There is a fashion in the corporate world for major firms to trumpet ethical credentials. From supermarkets to banks, they boast of their support for local communities, their commitment to diversity, their devotion to social inclusion and determination to fight climate change.

But the survival of Ukrainian freedom is an issue of urgency. Every company has a clear duty to cut any existing ties with Russia, otherwise, they are making a mockery of rhetoric about corporate responsibility.

Plenty of firms have acted, like BP, Apple and Nike. Jaguar-Land Rover has paused deliveries of vehicles to Russia, while H&M has suspended sales there. The Man Group hedge fund, which has pulled its clients’ money out of Russia, explained that “it feels a bit uncomfortable talking about making profits when people are being shot.”

Although that is an understatement, the reasoning is correct. So what is the excuse for those firms which have still to withdraw? They should not only be named and shamed, but also subjected to a consumer boycott in the West.

There are two other considerations. First, in the absence of direct military intervention, economic sanctions are the prime weapon of the West.

But they are more effective if universal, leaving no escape route for Putin’s regime.

Second, such measures are having a real impact. Eleven days after the invasion, Russia is in deep economic trouble. The war is costing £12billion a day, the rouble is in freefall and foreign assets frozen. The screw can be further tightened if the commercial world does its part.

The mass boycott of South Africa brought down the apartheid government. The same could happen in Moscow if the pressure is intensified.