WASHINGTON — The F.B.I. has not seen evidence of a “coordinated national voter fraud effort,” its director, Christopher A. Wray, told lawmakers on Thursday, undercutting President Trump’s efforts to stoke fears about mail-in ballots by claiming without evidence that they are an election threat.

Any fraud effort would have to be widespread and well coordinated to change the election outcome, and carrying out that kind of fraud would be a “major challenge for an adversary,” Mr. Wray said. But he made it clear he was not minimizing other threats to election security, including smaller-scale frauds.

Mr. Wray’s testimony came a week after the president publicly attacked him for asserting at a House hearing that Russia was conducting election interference operations and that violent extremism was a significant threat. Though both issues are well documented, Mr. Trump has long downplayed the Russian operations, seeing them as a threat to his legitimacy, and he has emphasized far-left extremists over the deadlier threat from the far right and white supremacists.

Mr. Wray sought to emphasize his views on Antifa, the loose anti-fascist movement, after Mr. Trump suggested the director had downplayed it as a threat during last week’s testimony. On Thursday, Mr. Wray said: “Antifa is a real thing. It is not a fiction.” He said the F.B.I. had seen “organized, tactical activity” among those associated with the movement on both the regional and local levels.

“We have seen Antifa adherence coalescing and working together in what I would describe as small groups and nodes,” Mr. Wray said. “All of this I said last week, but some got more clearly conveyed than others.”

Senator Ron Johnson of Wisconsin, the chairman of the committee, opened the hearing by demanding additional scrutiny on demonstrations against police brutality and racism. While Mr. Johnson homed in on people defacing property and committing violent acts, he admitted that the protests had been largely peaceful and also that white supremacists had presented a more lethal threat in recent years.

“As serious as all these threats I just mentioned are, I have a growing fear that what is happening in the streets of America actually represents a greater threat for a long-term democracy,” Mr. Johnson said.

Mr. Wray said terrorism — both international and domestic — remained the biggest threat to the country, and he singled out a 2019 case in Colorado in which F.B.I. agents arrested a man accused of being a white supremacist and plotting to bomb a Jewish temple and poison its members.

Kenneth T. Cuccinelli II, the acting deputy secretary for the Department of Homeland Security, also appeared before the committee for the first time since a senior department official accused him of downplaying the threat of white supremacist extremism.

Brian Murphy, the former head of homeland security’s intelligence branch, filed a complaint with the House Intelligence Committee asserting that Mr. Cuccinelli had ordered him to modify intelligence assessments to make the threat of violent white supremacy “appear less severe” and include information on violent “left wing” groups and antifa.

Mr. Cuccinelli was also accused of withholding the release of an annual threat assessment that would have singled out such white supremacy and Russian interference as a prime threats to the United States because of how it would “reflect upon President Trump.” 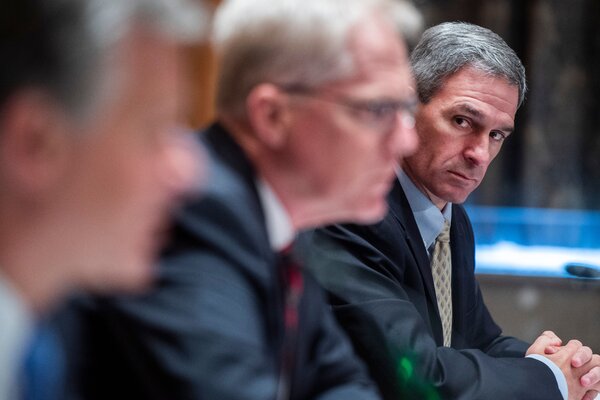 “I absolutely did not do that. That did not happen,” Mr. Cuccinelli told Senator Jacky Rosen, Democrat of Nevada, who pressed him on whether the language in the final draft of the assessment would be diluted when it is released on Oct. 1.

“When white supremacists act as terrorists, more people per incident are killed,” Mr. Cuccinelli said. “That is a higher lethality.”

Mark S. Zaid, Mr. Murphy’s lawyer, said his client looked forward to backing his claims in a closed-door briefing with the House Intelligence Committee. But he said the Homeland Security Department had not yet provided security clearances that would allow him and other lawyers for Mr. Murphy, who still works for the department, to sit in during the testimony and hear classified information related to the allegations.

“I have had it happen in past cases, so one must question why D.H.S. is obstructing a whistle-blower from revealing alleged misconduct of its top officials,” Mr. Zaid said. “That question answers itself.” He said Mr. Murphy would not testify without his lawyers.

The homeland security public affairs office, declining to provide the name of a spokesman, issued a statement saying the agency was processing the lawyers’ request for clearance but that the vetting required additional time. The department also said Mr. Murphy was no longer entitled to the same level of classified information in his new position.

Mr. Wolf demoted Mr. Murphy after disclosures that under his watch, the homeland security intelligence office included the tweets of American journalists in intelligence briefings distributed to law enforcement agencies, a move widely condemned as a potential infringement on First Amendment rights.

Mr. Murphy has said the demotion was retaliation for his complaints filed to the inspector general for homeland security.