Ministers agreed to bow to pressure from Australia to drop binding commitments to the Paris climate change agreement from the UK-Australian trade deal, a leaked government email obtained by Sky News has revealed.

Liz Truss, the trade secretary, and Kwasi Kwarteng, the business secretary, decided the government could “drop both of the climate asks” from the text of the trade deal, according to the email from a senior official.

Among the areas to be removed was “a reference to Paris Agreement temperature goals”.

Sky News understands the treaty text will contain a reference to Paris, but the reference to specific temperature commitments is disappearing.

Government sources confirmed that the references to temperature are now “implicit” rather than spelt out in the text of the trade treaty.

This is different from the UK-EU trade deal where the temperature commitments are explicitly in the deal. 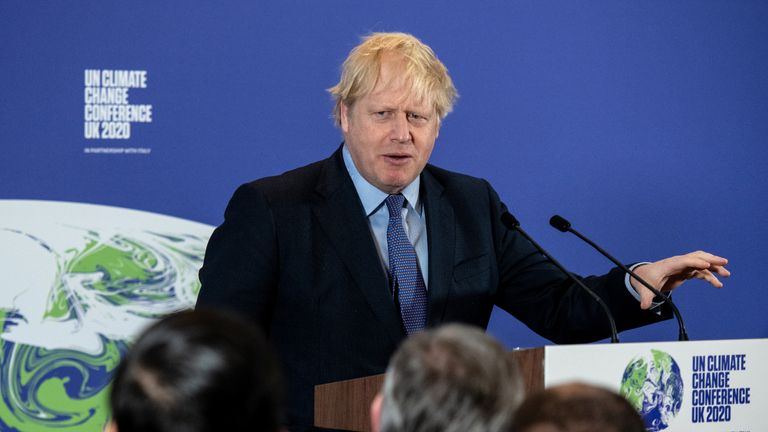 The UK government will argue that it has nevertheless secured a “win” on climate by referencing the Paris Agreement in the text of the treaty, the first time this has happened in an Australian trade deal.

The eleventh hour change comes three months after Boris Johnson and Scott Morrison, his Australian counterpart, announced they had come to an in-principle agreement over a trade deal.

However Sky News has learnt some of the trickiest issues have emerged since that announcement, including demands from Australia to drop the language around climate targets.

The news has outraged green groups who question the government’s commitment to the environment on the eve of the COP Climate Change summit hosted by the UK in Glasgow at the end of October.

At the start of August, the PM wrote in a letter that the Australia trade deal will “reaffirm commitments to multilateral environmental agreements, including the Paris Agreement”, adding: “We are clear more trade will not come at the expense of the environment.”

Australia signed a separate agreement in late July over clean technology which references climate goals, and Australian ministers say they are committed to the Paris agreement.

The PM is likely to claim he hasn’t broken his promise because some language about Paris remains.

The email comes from a senior official, a deputy director, in the “trade secretariat” part of the Cabinet Office:

He writes: “As flagged in my note to Lord Frost, the Business and Trade Secretaries were due to speak yesterday. We haven’t yet seen the formal read out, but we understand the conversation took place and the Business Secretary has agreed that, in order to get the Australia FTA over the line, DIT can drop both of the climate asks (ie on precedence of Multilateral Environmental Agreements over FTA provisions and a reference to Paris Agreement temperature goals.)”

The Paris Agreement makes countries set goals in order to limit global warming to well below 2C, preferably to 1.5C, and other Free Trade Agreements signed by the UK include references to the Paris Agreement.

The EU-UK deal signed by the government contains a provision that would trigger the suspension of the agreement if either side breaches its commitment to the Paris Agreement on climate.

Australia is a signatory to the Paris Agreement but Mr Morrison has submitted less ambitious targets than some other major nations, although the government insists ultimately on a path to net zero.

Australia’s heavy reliance on coal-fired power makes it one of the world’s largest carbon emitters per capita and Australian ministers say coal will be a major contributor to the country’s economy well beyond 2030.

Sam Lowe, trade expert at the Centre for European Reform, told Sky News he was surprised ministers appeared ready to drop commitments to the Paris Agreement to get the deal over the line.

“Australia doesn’t want the trade deal to be made conditional to their membership of Paris Agreement, so essentially it doesn’t want to be held to account in the event it doesn’t do what it says it does in relation to the agreement,” he said.

“It has made commitments to reduce its carbon emissions over a number years, but there is a suspicion it doesn’t have much intention to do so, as the economy is quite reliant on coal, and its politicians are sceptical of climate change. So it doesn’t want to have a binding international obligation that will require it to go through with this.”

Mr Lowe said that Mr Johnson could still make this a priority in this trade agreement by refusing to sign the deal without it.

“However this means negotiations would take longer and the UK might need to give up more in return,” he said.

He told Sky News: “Boris Johnson in a letter to me and other environmental leaders said that the trade agreement will include commitments to all multilateral environmental agreements including the Paris Agreement. The reason he wrote this letter is because he was saying trade and the environment cannot be separated, he said this is not going to be a race to the bottom, we’re not going to undercut regulations. He said this was going to be a race to the top. What this email shows is that this is just a barefaced lie and that actually what they’re doing is the opposite: this is a race to the bottom and it is a disaster.”

A government source said: “The final text of the agreement will contain a commitment to address all the Paris climate goals – so therefore implicitly includes temperature. It’s also the first time Australia will have ever included climate provisions in a trade deal. And includes various clauses for tackling emissions and so forth.

“There is a dedicated climate chapter which includes a substantive stand-alone article on climate change, where both parties affirm their commitment to address climate change, including under UNFCCC and Paris frameworks and recognition of the importance of achieving Paris/UNFCC goals, by implication, this covers the three main goals of Paris.”

Labour MP Anna McMorrin tweeted her reaction to Sky News’ story: “This is dreadful. Weeks from hosting #COP26, this is what this Government think climate leadership looks like.

“The UK should by leading example. Instead we are failing at every turn. Time is running out for our #climate.”

A government spokesperson said: “Our ambitious trade deal with Australia will include a substantive article on climate change which reaffirms both parties’ commitments to the Paris Agreement and achieving its goals, including limiting global warming to 1.5 degrees.

“Any suggestion the deal won’t sign up to these vital commitments is completely untrue. The UK’s climate change and environment policies are some of the most ambitious in the world, reflecting our commitment as the first major economy to pass new laws for net zero emissions by 2050.”