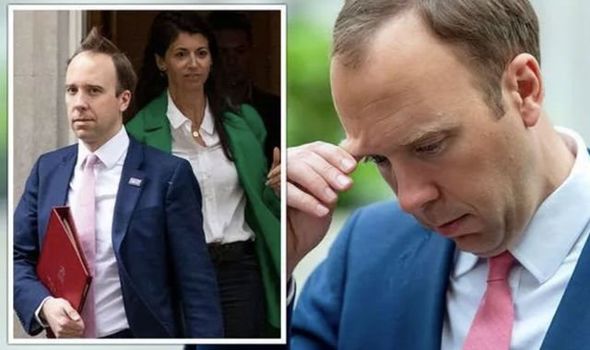 The West Suffolk MP had accepted an invitation to become the UN Economic Commission for Africa’s special representative on financial innovation and climate change.

The headline-making appointment was a comeback for the 43-year-old who resigned in June after images were published of him breaking social distancing rules by kissing a colleague.

However, he has since learned that sitting MPs are barred from holding the UN position. According to sources, he has received an apology for the confusion.

Mr Hancock said: “I was honoured to be approached by the UN and appointed as Special Representative to the Economic Commission for Africa, to help drive forward an agenda of strengthening markets and bringing investment to Africa.

“The UN have written to me to explain that a technical UN rule has subsequently come to light which states that sitting Members of Parliament cannot also be UN Special Representatives. Since I am committed to continuing to serve as MP for West Suffolk, this means I cannot take up the position.

“I look forward to supporting the UN ECA in their mission in whatever way I can in my parliamentary role.”

Vera Songwe, the executive secretary of the ECA, had saluted Mr Hancock’s “global leadership, advocacy reach and in-depth understanding of government processes” and praised his “success on the United Kingdoms response to the Covid-19 pandemic and the acceleration of vaccines”.

However, the appointment had been condemned by figures including Dr Ayoade Alakija, co-chair of the African Union’s Africa vaccine delivery alliance, who described the move as “tone deaf” and the “definition of a colonial hangover”.

On Friday, the PassBlue website, which scrutinises the UN, quoted UN spokesman Stéphane Dujarric, saying: “Mr Hancock’s appointment by the UN Economic Commission for Africa is not being taken forward. ECA has advised him of the matter.”

Reacting to the news that Mr Hancock will not take up the role, Nick Dearden, director of Global Justice Now, said: “If Matt Hancock wants to help African countries recover from the pandemic, he should lobby the prime minister to back a patent waiver on Covid-19 vaccines. If he’d done that when he was in government, tens of millions more people could already have been vaccinated.

“The last thing the African continent needs is a failed British politician. This isn’t the 19th century.”