ATLANTA — For two months, Georgia Republicans have watched their party descend into a morass of betrayal, chaos and blame. A top state election official accused President Trump of fomenting a “civil war” among fellow Republicans as he pressured the governor and the secretary of state to help overturn his electoral defeat.

And, of course, there was the sting of defeat itself — in both the presidential race and the two Georgia Senate runoff elections last week, which relegated Republicans to minority status in both houses of Congress.

But then there was Lauren McDonald Jr., a veteran state public service commissioner who goes by Bubba.

Mr. McDonald was the third Republican candidate on Tuesday’s runoff ballot. And his 42,000-vote victory in a race in which many voters’ likely motivation was simple party affiliation was a comforting signal to many Georgia Republicans that their party was in better shape than shocking defeats at the top of the ballot might have indicated.

Brian Robinson, a longtime Republican and a Georgia political consultant, said the party had certainly been left shaken by it all. However, he added, “Bubba McDonald showed there’s still a pretty strong generic Republican vote out there.”

The recent trio of high-stakes Democratic victories in Georgia, fueled by the state’s changing demographics and by distaste for Mr. Trump, may mean that Georgia has finally achieved battleground status. And Democrats, observing a Republican house divided, are hoping for more. They are particularly focused on defeating incumbent Gov. Brian Kemp in 2022, anticipating that Stacey Abrams — Georgia Democrats’ biggest national star since Jimmy Carter — will take on Mr. Kemp in a rematch of their close and bitter 2018 race.

But none of that will be easy in a state that retains a strong conservative streak, and where Republicans control most of the levers of power. Every statewide elected office in state government is currently in Republican hands. And Democrats, who had hoped to make big inroads in the state legislature, netted only two State House seats and one State Senate seat in November’s elections, leaving Republicans with comfortable majorities in both houses.

Indeed, the possibility of enduring Republican strength in Georgia may illustrate the limits of the damage the Trump era may end up having beyond Washington, particularly in places where the G.O.P. has spent years building solid state parties that cater to a receptive conservative voting base. Republicans cemented or broadened gains in legislatures and state offices around the country even while they were losing the White House and the Senate.

Mr. McDonald, in an interview on Friday, noted that he had been an early supporter of Mr. Trump’s and continued to count himself as one. “In my opinion, he’s been a very strong president,” he said. “But let’s turn the page and move on.”

Even optimistic Georgia Republicans concede that it is difficult to know how badly the Republican brand has been damaged by Mr. Trump, particularly after he incited a mob to attack the U.S. Capitol on Wednesday, and after his incessant and baseless argument that the election was stolen from him in Georgia and elsewhere. (Mr. McDonald declined to comment when asked his opinion about the storming of the Capitol.) 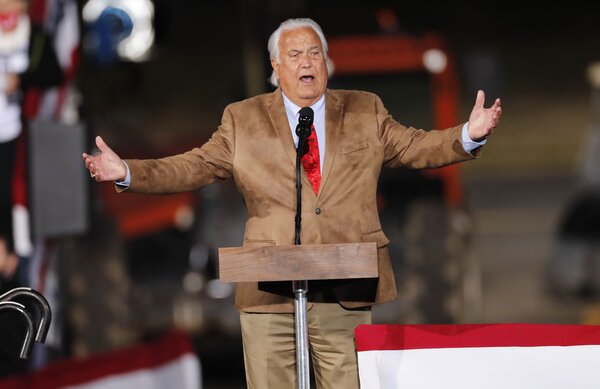 It is also difficult to assess Mr. Trump’s influence after he leaves the White House. In Georgia, for instance, he has threatened to back a Republican primary challenger for governor as a means of punishing Mr. Kemp for his lack of fealty.

Charles S. Bullock III, a political scientist at the University of Georgia, noted that Mr. Trump continued to have many ardent fans in the state and that many of them believed the election had been stolen. Even if Mr. Kemp were to survive a primary challenge from a Trumpist candidate, such a challenge could siphon off supporters and contributors before he even had the chance to square off against the formidable Ms. Abrams.

More generally, Dr. Bullock said, Republicans should be nervous with their margins in statewide races having dwindled year after year. “The two parties may be just about evenly matched going into 2022,” he said. “But the trends have been moving toward the Democrats.”

Some hoped that the widespread disgust over the storming of the Capitol would “break the spell of the cult” surrounding Mr. Trump, as Mr. Robinson described it. Mr. Kemp strongly condemned the action Wednesday, calling it “un-American.”

Mr. Trump has been a dominant and fearsome force among Georgia Republicans, capable of elevating or debilitating the prospects of a candidate with a tweet. Yet after losing his own re-election campaign and then being blamed for the defeats in the Senate races, his grasp has eroded considerably, so much so that some party leaders and elected officials saw him as a liability and a cautionary tale of what could happen when a party was commandeered by a single personality.

Lt. Gov. Geoff Duncan, one of the Republican state officials who became a target after resisting the president’s campaign of pressure to overturn his loss, contends that, ultimately, he will be vindicated.

“I think that an overwhelming majority of the voters will come back our direction and reward us,” Mr. Duncan said. “And if they don’t see that as a valuable trait of their lieutenant governor, then I don’t want to represent them. I’ll be perfectly fine getting defeated if they don’t reward or recognize the value of honesty and integrity. I’m not their guy.”

When Mr. Trump is taken out of the equation, Republicans’ fundamentals are indeed strong in Georgia, at least for the immediate future.

Their legislative dominance means that Republicans this year will control the decennial redrawing of state legislative and congressional district maps, giving them the ability to protect their own and create new problems for some sitting Democratic office holders. In the legislative session that begins Monday, Republicans are promising to impose strict new limits on voting in the wake of record voter turnout.

Georgia’s Republican House speaker, David Ralston, said he was unlikely to support eliminating no-excuse absentee voting. But any attempts to curtail the current system are likely to be cited by Democrats as examples of voter suppression, a charge they have leveled against Mr. Kemp, a former secretary of state, for years.

Moreover, the Rev. Raphael Warnock, one of the two Democratic Senate victors this week along with Jon Ossoff, will have to run for re-election in 2022, because, in defeating Senator Kelly Loeffler, he is technically finishing out the term of the retired former Senator Johnny Isakson. He is likely to be a top target for national Republicans.

The activists who have been helping drive turnout and bolster Democrats know they have their work cut out for them.

“It’s going to remain a purple state,” said Esteban Garces, a co-executive director of Poder Latinx, an organization that had been heavily involved in registering and mobilizing Latino voters in Georgia during the recent elections.

“They were narrow, and that’s the truth of it,” Mr. Garces said of the recent wins by Democrats in the presidential and Senate races. “That means the work on the ground is going to have to be replicated time and again.”

Kelly Dietrich, the chief executive of the National Democratic Training Committee, an organization that prepares Democrats to run for elected office, said he was “bullish” on Mr. Warnock’s 2022 run, as well as for other Democratic candidates in Georgia. “It’s that long-term infrastructure required to build long-term power,” he said of the work being done.

He added that Republicans would be weighed down by the identity crisis left in the wake of the Trump administration.

“This reckoning is their own doing,” Mr. Dietrich said. “They’ve created a monster, and they can’t control it.”

Some reckoning has already begun. This week, Erick Erickson, the influential conservative radio host and Trump critic, called for the resignation of the chairman of the Georgia Republican Party, David Shafer, a staunch supporter of the president who also promulgated claims of electoral fraud after Mr. Trump’s loss. Mr. Erickson argued that that strategy, which might have depressed Republicans’ desire to turn out in the runoff, ran counter to Republicans’ interests. (Mr. Shafer could not be reached for comment.)

The invasion of the U.S. Capitol may also continue to have political repercussions in Georgia. On Friday, The Atlanta Journal-Constitution reported that a robocall telling Trump supporters to march on the Capitol and “fight to protect the integrity of our elections” had been put out by the Rule of Law Defense Fund, an arm of the Republican Attorneys General Association. That group is chaired by Chris Carr, the Georgia attorney general.

Katie Byrd, a spokeswoman for Mr. Carr, said Friday that Mr. Carr had “no knowledge” of the decision to put out the robocall and noted that he had publicly condemned “the violence and destruction we saw at the U.S. Capitol.”

And despite some of the positive signs, Republicans are also weighing how the last days of the Trump era have weakened them and are ruminating on the future of their party’s collective identity. Trey Allen, a Republican commissioner in Columbia County, near Augusta, said the party would have to move beyond being defined by a single personality and focus on classic conservative themes that are still popular with many Georgia voters.

“We will hopefully tighten up our platform,” said Mr. Allen, a self-described Reagan Republican who voted for Mr. Trump twice, “and focus on the things that make conservatives who they are: strong economy, strong military, less government, more freedoms.”

Mr. Duncan said that Republicans needed to prioritize policy over personality. He imagined what he described as “G.O.P. 2.0,” a version of the party that embraced traditional conservative ideals while also being more empathetic and having a more gentle tone, to win back voters who rejected Mr. Trump’s vitriolic style.

“If we don’t learn from our mistakes,” he said, “we’re going to continue to lose from our mistakes. This is the perfect moment in time to start G.O.P. 2.0 and realize we can never let a person be more important than a party.”