WASHINGTON — Democrats sought on Friday to salvage their bid to push through a large increase in the federal minimum wage as part of President Biden’s $1.9 trillion stimulus plan, pressing to preserve a key liberal priority without imperiling the chances of an urgently needed pandemic aid package.

A day after a top Senate official effectively knocked the wage hike out of the pandemic aid bill, Democrats rushed to find alternative ways of meeting their goal to impose a $15-per-hour floor for tens of millions of workers across the country.

Senator Chuck Schumer of New York, the majority leader, and other top Democrats, were considering a plan that would penalize corporations that pay workers less than $15 per hour, a senior Democratic aide said on Friday.

Senator Ron Wyden of Oregon, the chairman of the Finance Committee, said the still-evolving proposal would impose an escalating tax on the payrolls of large corporations, starting at 5 percent, if any of the company’s workers earned less than a certain hourly wage. It would include what Mr. Wyden called “safeguards” to prevent companies from laying off workers and replacing them with contract employees to avoid the tax.

“While conversations are continuing, I believe this ‘plan B’ provides us a path to move forward and get this done through the reconciliation process,” Mr. Wyden said in a statement.

The effort faces long odds in the evenly divided Senate, where Republicans and some centrist Democrats are opposed to the idea of more than doubling the minimum wage as part of the stimulus plan. But signaling the party’s reluctance to abandon the effort, the House was poised as early as Friday night to push through the stimulus package with the $15-per-hour minimum-wage increase included.

The sweeping measure, which was expected to pass almost entirely along party lines, would also provide billions of dollars for schools, vaccine development and distribution, an extension and expansion of weekly federal unemployment benefits and another round of direct payments to American families.

The minimum wage increase “is a value, this is a priority and we will get it done, but let’s not be distracted from what is happening in this legislation,” said Speaker Nancy Pelosi of California. “This is a spectacular piece of legislation. While the Senate has prevented us temporarily from passing one aspect of it, let us not be distracted from what is in here, because it is a great bill.”

To speed Mr. Biden’s stimulus plan to enactment, Democrats are using a fast-track process known as budget reconciliation, which shields legislation from a filibuster and the 60-vote requirement to overcome one, and allows it to pass on a simple majority vote, bypassing Republican opposition.

But Elizabeth MacDonough, the Senate parliamentarian, advised senators on Thursday that their legislation to gradually increase the minimum wage to $15 by 2025 would violate the strict budgetary rules that limit what can be included in a reconciliation measure. The ruling opened the door for Republicans to demand that the proposal be jettisoned from the stimulus bill when it comes before the Senate.

It has sparked outrage among progressive activists, calls for Democratic leaders to fire or overrule Ms. MacDonough, and demands for the elimination of the filibuster to allow Democrats to enact the wage increase and other marquee agenda items over Republican objections.

Mr. Biden has made clear he does not support any of those actions, sending top congressional Democrats searching for a wage proposal that could meet the stringent requirements of a reconciliation bill, which must have a direct impact on federal spending or revenues.

It was not clear on Friday whether the tax penalty plan would qualify, because if it achieved its objective of ensuring all large companies pay their workers at least $15 per hour, none of the companies would pay the tax, and federal revenues would not change.

Mr. Wyden said as part of the plan, very small businesses “with middle-class owners” would receive an income tax credit to cover 25 percent of their employees’ wages, up to $10,000 per year per employer, in an effort to incentivize higher pay at those businesses. 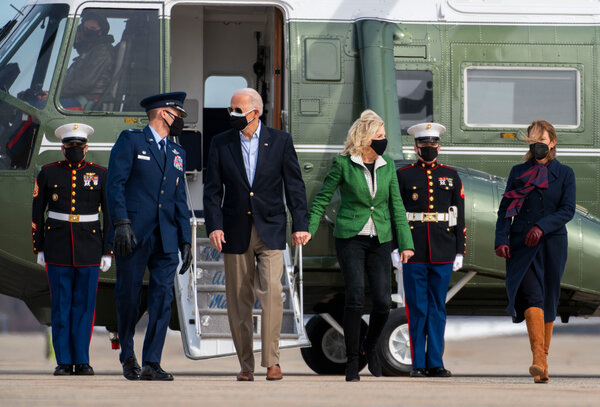 As its details were being ironed out on Friday, the tax penalty proposal was drawing broad criticism, raising questions about whether it could garner enough support to pass even if it met with Senate rules. Some progressive groups raised concerns that the plan would be difficult to enforce, relying on federal officials to collect vast swaths of new data on employee pay and hours at large companies.

And liberal lawmakers said Democrats risked losing a crucial opportunity by not insisting on a large wage hike now, at the start of Mr. Biden’s term.

“While I don’t want to ignore the tax being a factor, I also know that a tax break is just not a replacement for a $15 minimum wage,” Representative Alexandria Ocasio-Cortez, Democrat of New York, told reporters on Friday. “It sets the stage for how effective we’ll be for the rest of the term, so the earlier we can make these fixes, the more we can change people’s lives.”

Business groups dismissed the tax penalty idea and called on Democrats to instead work with Republicans and industry groups to craft a compromise bill to raise the minimum wage to a lower amount than $15 an hour.

Austen Jensen, the senior vice president for government affairs at the Retail Industry Leaders Association, said in a news release that threatening businesses, many of which have suffered devastating blows during pandemic-mandated shutdowns, with a large payroll tax increase “should be a non-starter for anyone who cares about economic recovery and getting furloughed workers back on private sector payrolls.”

Some Republicans have offered their own proposals to raise the minimum wage, including a plan from Senators Mitt Romney of Utah and Tom Cotton of Arkansas that would gradually raise the minimum wage to $10 over four years. On Friday, Senator Josh Hawley, Republican of Missouri, proposed applying the $15 increase championed by Democrats only to businesses with annual revenue of more than $1 billion.

If Democrats cannot find a way to include the wage increase in the stimulus measure, the bill could lose support from progressives, although Ms. Pelosi said the House would “absolutely” pass the measure without the wage increase if needed.

“I don’t think we can go back to voters and say, ‘Look, I know Republicans, Democrats, independents support this; we promised it, but because of an unelected parliamentarian who gave us a ruling, we couldn’t do it,” Representative Pramila Jayapal of Washington, the chairwoman of the Progressive Caucus, told reporters. “There’s a lot of great things in the package, but if it’s watered down, that’s a whole different issue. So we just have to see what it ends up as.”

Democrats have embraced the overall stimulus package as critical for the economy. It would provide $1,400 direct payments to individuals earning up to $75,000 a year and couples earning up to $150,000, and expand a weekly federal unemployment benefit, increasing it from $300 to $400 a week and extending it through the end of August. It would also increase the value of the child tax credit; provide more than $50 billion for vaccine distribution, testing and tracing; and steer nearly $200 billion to primary and secondary schools and $350 billion to state, local and tribal governments.

The legislation, once it clears the House, will head to the Senate, where it is expected to be amended. It would then be sent back to the House a second time for a final vote before going to the White House for Mr. Biden’s signature.

House Republicans were expected to oppose the legislation with few exceptions. They have argued that the plan is too costly and contains provisions that are unrelated to pandemic relief. And while members of their party used the reconciliation process twice in 2017 to steer around Democratic opposition to their highest priorities — once to push through a $1.5 trillion tax cut and once in a failed attempt to repeal the Affordable Care Act — they complained that Democrats had cut them out of drafting the stimulus measure.

“This isn’t a relief bill,” said Representative Kevin McCarthy of California, the minority leader, at his weekly news conference. “It takes care of Democrats’ political allies, while it fails to deliver for American families.”

Like several Republicans on Capitol Hill, he sported a “No Pelosi Payout” sticker.

“We already know what is the best stimulus plan out there: It is to fully reopen our economy,” Mr. McCarthy said.