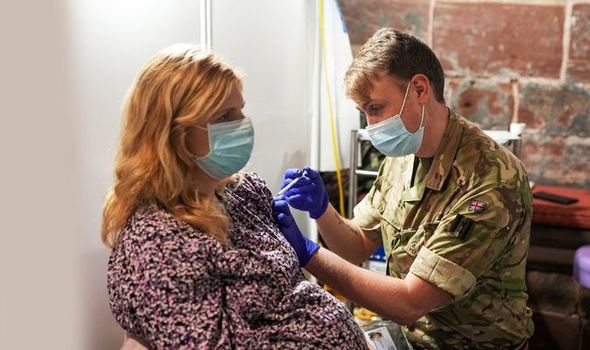 Mr Johnson said: “What we are saying is think carefully before you go. What kind of an event is it?

“Are you likely to meet people who are vulnerable? Are you going to meet loads of people you haven’t met before? And get a test.

“Make sure there’s ventilation, wear a mask on transport and get a test before you go.”

But Mr Johnson stressed that a “great national fightback has begun”, as the booster rollout was gathering pace with a record 650,000 jabs delivered in a day earlier this week. He said: “Let’s carry on giving Omicron both barrels. Let’s slow its spread and give the vaccines more time.”

And Professor Whitty backed up the Prime Minister saying that thinking through planned gatherings with loved ones could be key.

He added: “What most people are doing, and this seems very sensible, is prioritising the social interactions that really matter to them and de-prioritising ones that matter much less. That’s going to become increasingly important as we go into the Christmas period.”

The PM sought to assure this Yuletide will not be hit as hard as last year, insisting: “I said many times I thought this Christmas will be considerably better than last Christmas and I stick to that.

“We’re in a different environment, thanks to the boosters, from where we were last year. But we’ve got to be cautious and think about it while we wait for the benefits of the boosters to really kick in.”

The appeal, at a Downing Street news conference, followed alarming data that showed a record 78,610 new infections were recorded in the UK yesterday, the highest since the pandemic first hit.

The UK Health Security Agency reported a further 4,671 confirmed cases of the Omicron variant, bringing the total to 10,017.

Prof Whitty warned: “Records will be broken a lot over the next few weeks as the rates continue to go up.

“What we’ve got is two epidemics on top of one another – an existing Delta epidemic, roughly flat – and a very rapidly growing Omicron epidemic on top of it.”

But despite deepening concerns about the surging Omicron infection levels, the PM insisted further restrictions – on top of his Plan B measures – were not required.

It comes less than 24 hours after Plan B curbs triggered a record Commons revolt by nearly 100 Tory MPs.

Prof Whitty added that he would “strongly encourage” people to take tests before visiting ­vulnerable people and to meet in well-ventilated areas or outdoors if possible. He admitted scaling down his own Christmas plans as he expected to be working medical shifts to fill gaps in NHS rotas left by staff off sick or after testing positive.

He said Omicron was “moving at an absolutely phenomenal pace” and it will only be a short time until we get to “very large numbers”, adding that he thought the variant was a “very serious threat”. Pointing to the latest evidence about the variant, he said: “All the things we do know are bad.”

Although Prof Whitty said effective vaccines and boosters were the things “going for us” he warned there will be “substantial numbers” going into hospital which will become apparent “fairly soon after Christmas”. Dr Nikki Kanani, medical director of primary care for NHS England, told the news conference she also had slimmed down festive plans.

“As and when I need to work over the Christmas period I will be, just as my colleagues will, because that’s what we’re here to do.”

Dr Kanani then advised: “This is our chance to make choices for each other and our NHS.

“If you’re going to go to a stadium at the weekend, make it one where you can get your vaccine or help out to give a vaccine – rather than going to watch a match.”

Mr Johnson confirmed a national booster booking service had gone live. He added: “If you’re over 18 and had your second jab at least three months ago, then you can get jabbed right now. And it’s absolutely vital that you do.

“The wave of Omicron continues to roll in and the doubling rate in some regions is down to less than two days. We are also seeing the inevitable increase in hospitalisations – up by 10 per cent nationally week on week and up by almost a third in London.” The PM insisted there were “signs of hope”, saying people have responded “with an amazing spirit of duty and obligation to others”. He added: “We’re throwing everything at it.”

Earlier, UK Health Security Agency chief executive Dr Jenny Harries warned the strain is “probably the most significant threat” since the start of the pandemic and said cases would be “staggering” compared to what has gone before.

She told MPs on the Transport Committee the “real potential risk” is whether “cases turn into severe disease, hospitalisations and deaths”, but added that it is “too early” to be clear on that.

A Government adviser, who sits on the Scientific Advisory Group for Emergencies (Sage), warned that the NHS could be overwhelmed next month.

Professor Graham Medley, of the London School of Hygiene & Tropical Medicine, said despite the uncertainties over Omicron, the UK “could see numbers being admitted to hospital getting very large” if infections continue to rise and spill into older age groups.

The vaccine is our number one weapon, says Maggie Throup, Vaccines Minister

Vaccines have saved countless lives and the boosters continue to be our number one weapon against this virus.

That’s why we have launched an urgent national mission, Get Boosted Now, to get a booster to all eligible adults to shore up our protection against the tidal wave of infections expected.

If we do not take swift action, we will start to see more and more hospitalisations.

We absolutely cannot risk overwhelming our NHS – we must act now.

The booster dose is critical for achieving maximum levels of protection against Omicron, with a third dose being 70 per cent effective at preventing symptomatic infection.

This is why we have massively expanded the programme to give every eligible adult the chance to get boosted before the end of December.

As of yesterday, all adults aged over 18 can book their appointment online or find their nearest walk-in centre.

It has been heart-warming to see so many people already playing their part in this fight, with such massive numbers of booster bookings and queues around the block at walk-in centres.

To speed up the programme further, we are opening even more vaccination sites and pop-up centres in convenient locations, recruiting extra vaccinators and admin staff and rewarding GPs and pharmacists for their continued dedication.

And where safe, the 15-minute observation rule has also been temporarily suspended.

I am aware of the challenge this poses to our brilliant NHS. Many GPs, doctors, nurses, porters and cleaners have been working tirelessly on the rollout since this time last year, when Margaret Keenan was the first person to be vaccinated outside of
a clinical trial.

I cannot thank these frontline heroes enough for their enormous contribution.

I know they are up to this new challenge, too. They will be supported by 750 military personnel who have been drafted in. I am also grateful to the Armed Forces for their efforts to support the response to the pandemic.

You can all play your part too. We cannot afford to give up now and let all of our hard work go to waste.

Once again I am urging you to Get Boosted Now. Please, come forward for your jab.