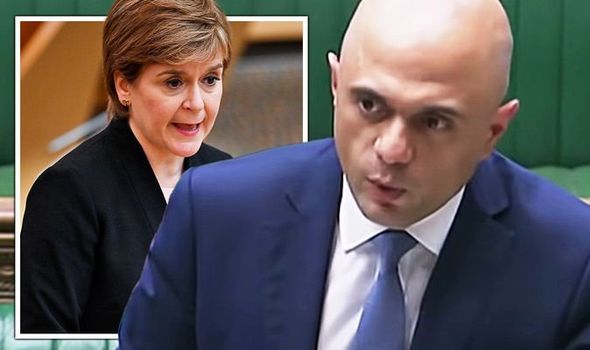 The Health Secretary’s questioning comes as the weekly coronavirus deaths registered in England and Wales reach their highest level since mid-May, according to the latest figures. However, the number of deaths has been fluctuating at about 100 for the last few weeks, and it is too early to say whether the latest rise marks the start of an upwards trend.

As confirmed by Prime Minister Boris Johnson at the coronavirus press conference yesterday, England is due to enter Step 4 of the Government’s road map out of COVID-19 restrictions next Monday, July 19.

It will see the scrapping of most remaining restrictions, including the legal requirement to wear a face mask, social distancing and limits on how many people can gather.

The Government has acknowledged that there will be more cases, hospital admissions and deaths as the country moves into the next step.

Mr Javid, who took over as Health Secretary after Matt Hancock’s resignation for breaking social distancing rules, has stated his key priority is getting the country “out of this pandemic”.

The plan has come under attack from the leader of the opposition, Sir Keir Starmer, who warned Boris Johnson was leading the country into a “summer of chaos and confusion”.

It comes as tens of thousands of further cases of the Delta variant of coronavirus have been recorded in the UK over the last week, new figures reveal.

PHE said the Delta variant currently accounts for around 99 percent of cases that are sequenced in the UK.

The spike in cases has put pressure on the Prime Minister’s roadmap out of lockdown.

It will take people “some time” to get over the fear and anxiety that has arisen as a result of the pandemic, a sociology expert has said.

Robert Dingwall, professor of sociology at Nottingham Trent University, said the concerns which have arisen over the last 15 months would take time to subside as people get used to living with Covid-19 as an infection which circulates in society.

Professor Dingwall said that it was time for the Government to “make a much more conscious shift towards positive messaging” around coronavirus.

“I think the situation that we’re dealing with now is really more of a psychological one than an epidemiological one.

A third of the population in England is still at risk of being infected with the Delta Covid-19 variant, according to a top scientific adviser.

Professor Matt Keeling, from the University of Warwick is one of the experts who informs ministers about the pandemic.

He said his team estimate that by July 19 (Freedom Day) there will have been 15.3 million symptomatic and asymptomatic infections in the country.

This means that 27.4% of the English population will have been infected and therefore have natural immunity, leaving the rest either vaccinated or unvaccinated.

When taking account of vaccines, which do not work perfectly, the modellers at Warwick calculated that 33% of the population remains susceptible to the Delta variant, which was first identified in India.

He said keeping hospital admissions low “and below what we saw in January” really does rely on individual behaviour, as he backed calls for people to take it slowly when restrictions are released.

Professor Medley from the London School of Hygiene and Tropical Medicine said he agrees that the UK will likely experience another wave of infection when it releases restrictions.

He said: “because the vaccines are not perfect and we’re not vaccinating everybody, so there is room for another wave of infection”.

13:22 'Masks still have an important role to play' – Sajid Javid

People will no longer be required to wear masks in indoor public places from July 19 but Mr Javid insists they still have an important role to play.

He said: “When it comes to masks, they do have an important role to play but we think that role can be played by moving from regulation to guidance.”

Boris Johnson has previously stated the aim of the new guidance is to: “allow people to make their own informed decisions about how to manage the virus.”

13:17 No more isolation for the fully vaccinated

Fully vaccinated people will no longer be required to isolate from August 16 as part of the roadmap out of lockdown.

Conservative MP Stephen Metcalfe questioned why this restriction lift was coming into action before ‘Freedom Day’ on July 19.

“We know that against symptomatic Covid-19 it is estimated to be 78% to 80% effective with both doses.

“By introducing the changes he’s referred to on August 16, it will mean that there are more people vaccinated and it will help reduce severe illness.”

The NHS recently delayed plans to share NHS medical records from every GP patient in England with third parties but Labour remain unsatisfied.

Shadow health minister Alex Norris told the Commons: “At the previous health questions we secured a commitment from the minister to delay the implementation date for this data grab in order to properly communicate with the public.

“However, rather than a significant delay so there could be the public information campaign that the minister says she’s so keen to have, on the basis set out by the BMA, by the Royal College of GPs, instead what we have is a short pause.

“The minister says she wants to listen and to build trust, so why on earth is this being snuck out during the summer recess?

“The reality is that the Government simply has not passed the test for informed consent.”

Health minister Jo Churchill defended the Conservative position: “Nothing is being snuck out, we are not doing a data grab.

“It’s important that we get this right… we have heard the concerns.

“We will respond to them and we will take the appropriate amount of time, even if that means beyond September 1 to make sure we have engaged properly.”

12:53 Social care is not only about the elderly, says Conservative MP

Do not forget about working-age adults in need of care when reforming social care in the future, pleaded Conservative MP Mark Harper.

In an unexpected gaff, Mr Harper referred to Sajid Javid by his former job title of Chancellor in a “slip”, as he urged the new Health Secretary not to “default to putting up taxes” to pay for planned social care reforms.

The Forest of Dean MP said: “Could I just say to the chancellor first of all when he brings forward those proposals, Secretary of State rather, could he make sure he addresses both social care for working-age adults, which actually accounts for over half of public spending?

“The debate is always focused on older people and people of working age often get forgotten.

“The reason for my slip just now was he’ll be aware that as a former chancellor that the tax burden was at a 50-year high before Covid.

“So can I say to him when he brings forward those proposals, can we not just default to putting up taxes however they are disguised, but look at overall Government spending, set some priorities and make some choices about what we think is important?”

Mr Javid responded: “He will be pleased to know I am working with the current Chancellor and other current Cabinet colleagues on bringing forward a more sustainable long-term plan and I hope that he will support it when it comes to it.”

Shadow health secretary Jonathan Ashworth noted the elective treatment backlog was now at a “record high” as he called for more resources for trusts.

He said: “The number of of beds available within a trust impacts its ability to get on top of the elective backlog.

“The Secretary of State promised trusts that they would get everything they need to get through the backlog.

“So how much will trusts get and when will they get it?”Minister Edward Argar replies: “It is an important question.

“Tackling the elective backlog is one of our key priorities.

“We have already committed one billion pounds to help tackle that backlog.

“That, of course, coming on top of the record funding of £33.9billion.”Ashworth says: “Why was it on Friday that trusts were told the threshold for accessing that funding was increasing.

“At just the time hospital admissions are increasing.

“Surely we should be giving trusts more access to funding at this time?

Argar retorts: “We have worked with the NHS to determine the right thresholds over and above what we would have been expected to do!”

“A total of two million elderly and disabled people have applied for care but had their request turned down and millions more families and staff have been pushed to breaking point.

“When is it that we will see the plan?

“Will it provide the full details will it keep to the promises he has made or does keeping your word mean nothing to anyone in Government?

Mr Javid replies: “It is worth repeating the Government is committed to developing a sustainable plan for adult social care and making sure that plan is brought forward, in full, this year.”

The Health Secretary has promised to bring forward a “full plan” to reform adult social care this year, after Labour accused the Government of not keeping its word on the issue.

Sajid Javid has opened his Parliamentary questioning by saying: “I want people to be able to get the care they need when they need it without facing an astronomical care bill. So we are committed to social care reform and we will bring forward proposals later this year.”