Florida’s governor has elbowed his way to the front of the line of 2024 Republican hopefuls by leveraging a brand of “competent Trumpism” (as one ally put it) and hitting back at critics of his pandemic leadership.

MIAMI — No one had to tell Ron DeSantis that his mock debates had bordered on disastrous. His answers rambled. He seemed uninspired.

By the time he got to the greenroom of the biggest political stage of his career, a Republican primary debate for Florida governor in June 2018, he had made a risky decision.

“I thought about everything we did in debate practice,” his campaign manager, Brad Herold, recalled Mr. DeSantis’s telling him. “I’m going to throw it out and do my own thing.”

At the debate’s start, the audience applauded louder for his better-known opponent, Adam Putnam. By its end — after he had cast Mr. Putnam as a vestige of old Republicanism and delivered a rat-a-tat of one-liners — Mr. DeSantis had taken command of the crowd.

Nearly three years and a pandemic later, Mr. DeSantis’s inclination to keep his own counsel and drive hard at reopening Florida has made him perhaps the most recognizable Republican governor in the country and a favorite of the party faithful. In turn, he has become a polarizing leader in the resistance to lengthy pandemic lockdowns, ignoring the advice of some public health experts in ways that have left his state’s residents bitterly divided over the costs and benefits of his actions.

Now, with Florida defying many of the gloomy projections of early 2020 and feeling closer to normal as the pandemic continues to dictate daily life in many other big states, Mr. DeSantis, 42, has positioned himself as the head of “the free state of Florida” and as a political heir to former President Donald J. Trump. Mr. DeSantis owes a mightier debt than most in his party to Mr. Trump, who blessed his candidacy when he was a nobody congressman taking on the staid Florida Republican Party.

Mr. DeSantis’s political maneuvering and extensive national donor network have allowed him to emerge as a top Republican candidate to succeed Mr. Trump on the ballot in 2024 if the former president does not run again. The governor’s brand of libertarianism — or “competent Trumpism,” as one ally called it — is on the ascent. Seizing on conservative issues du jour like opposition to social media “censorship” and vaccine passports, he has forged strong connections with his party’s base. 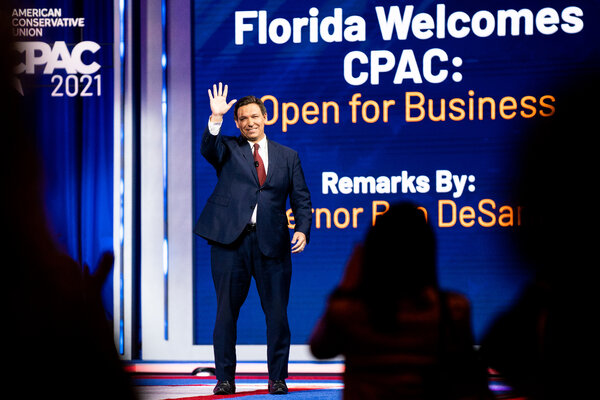 And his bonds with Republican leaders may be deepening: Mr. DeSantis has a plum speaking spot on Saturday night at Mar-a-Lago, Mr. Trump’s resort and political base in Palm Beach, Fla., for the Republican National Committee’s spring retreat. Other possible 2024 rivals, like former Secretary of State Mike Pompeo and Senator Marco Rubio, were relegated to appearances a night earlier.

The governor has also taken steps to shore up his political standing around his handling of the pandemic, summoning reporters to the State Capitol on Wednesday to blast — complete with a slide-show presentation titled “FACTS VS. SMEARS” — a report in CBS News’s “60 Minutes” that did not have sufficient evidence to prove a pay-to-play dynamic between Mr. DeSantis’s administration and Covid-19 vaccine distribution for white and wealthy Floridians.