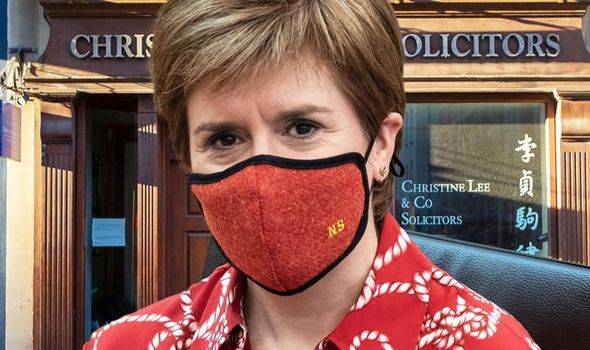 Ms Lee, who donated £500,000 to Labour MP Barry Gardiner over six years mainly to cover staffing costs in his office and employed her son as his diary manager, works closely with the Chinese People’s Association for Friendship with Foreign Countries (CPAFFC).

In October 2020, US Secretary of State Mike Pompeo said the CPAFFC had “sought to directly and malignly influence” state and local leaders to promote China’s global agenda.

Now, the Scottish Daily Express can reveal the First Minister has long-standing ties to the CPAFFC, having visited China as their guest on several occasions and even welcoming the vice-president to the Scottish Parliament.

Stuart Crawford, a former army officer and SNP defence spokesman who now works as a defence and security commentator, said there were serious questions for the Scottish Government to answer.

He said: “If the US State department has stated that publicly, we can safely assume this organisation has a dual mandate, at best.

“You could say they have found a useful idiot in Nicola Sturgeon.

“The Scottish Government and Nicola Sturgeon would have been flattered by the attention and of course she is always seeking to present herself as a leader on the world stage.

“I wouldn’t go as far as saying she or the Scottish Government would’ve been overtly aware that they were being played but they appear to have been slightly naive in not questioning the Chinese interest in a tiny wee country off the northern coast of Europe.

“You must always ask what is in it for them? The answer is that anything that seeks to weaken the UK state would be good for China, not to mention Russia and Iran. It all boils down to the strategic importance of Scotland and the UK’s nuclear deterrent at Faslane. When you peel away the layers of the onion, you always come back to Faslane.

“Why are they trying to get close to Scotland? It is because Scotland is seen as a weak point of entry into the UK state.”

In July 2015, just eight months after she became First Minister, Ms Sturgeon visited China as a guest of the CPAFFC and met Yang Jiechi, director of Beijing’s Central Foreign Affairs Commission. The following year, she welcomed the CPAFFC’s vice-president Song Jingwu to her office at Holyrood, where she thanked the organisation for its “hospitality and great support”.

The First Minister was back in China in 2018, where she gave a speech at an event in Beijing hosted jointly by Unicef and the CPAFFC. She said: “I’m delighted to speak once again at the Chinese People’s Association for Friendship with Foreign Countries (CPAFFC).

“I am very grateful for everything this organisation does to strengthen the ties between our Scottish Affairs Office in Beijing and the Chinese Government’s State Council – and I’m aware that that’s just one example of the good work you do to forge friendships with countries around the world.”

After the claims about Ms Lee emerged, Home Secretary Priti Patel insisted the UK has “strong structures” in place to identify foreign interference and “where necessary, proportionate action is always taken to mitigate these threats”.