Ukraine: ‘Can West stand up to China’ asks Ortagus

China is already one of the world’s strongest military powers, but over the past 10 years it has steadily increased defence spending. China’s leader, General Secretary of the Chinese Communist Party Xi Jinping, has previously made public threats against Taiwan and demanded “reunification”.

Mr Jinping has been in power since 2012 and in November may be granted a third five-year term by China’s National People’s Congress.

During that time, China’s military spending has increased every year from $145 billion 10 years ago to $293 billion (£238bn) today, according to data from Statista.

Professor Steve Tsang, Director at the SOAS China Institute, believed Mr Jinping will use any means necessary to ensure China’s dominance in the next decade.

And that means turning the People’s Liberation Army into a power that can take on any nation – including the United States. 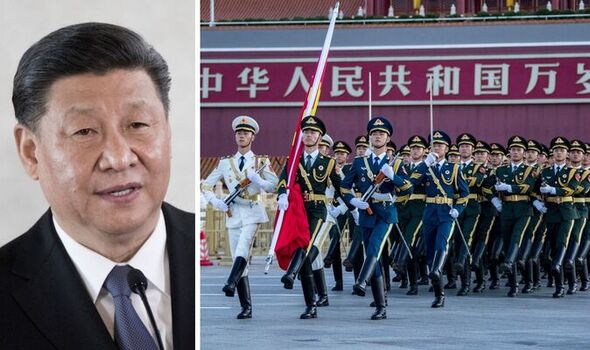 Professor Tsang told Express.co.uk: “To sum it up in plain English, he wants to make China great again. He wants China to take its place in the Sun as the greatest nation on Earth.

“The military spending is part of Xi’s plan to make China great again. China spends more money on internal security than it does on defence, but to make China the greatest power on earth the PLA must be transformed into an army that can fight and win wars.

“It is also important to remember that the PLA is not China’s national army, it is the Chinese Community Party’s army and serves their will.”

In May, US President Joe Biden warned China that America would come to Taiwan’s aid in the event of a military invasion.

Taiwan is an island nation in the South China Sea, which China claims is a breakaway state.

It is not recognised as a sovereign state by many countries around the world and the United States does not have diplomatic relations with Taiwan.

There are regular international disputes in the South China Sea when countries accuse each other of encroaching into their waters.

And Professor Tsang believed that Chinese Communist Party General Secretary Jinping is preparing to make a move on the island nation.

He said: “Xi Jinping fully intends to take Taiwan when he is ready. If Taiwan surrenders and says it wants to be a part of China, then there is nothing the Americans can do.

“If they do not surrender then he will do whatever it takes. The PLA is preparing to do what it is asked.”

Professor Tsang added that a conflict between the United States and China could pave the way for the world’s next global order.

Any conflict involving China could have catastrophic consequences as it has one of the biggest nuclear weapons arsenal on the planet.

The two countries were divided during a civil war in the 1940s and have struggled to find any common ground ever since.

China has used aggressive military tactics towards Taiwan several times over the years in an effort to show its intentions.

In October last year, Mr Jinping spoke about Taiwan at an event marking the 110th anniversary of a revolution that overthrew China’s last imperial dynasty in 1911.

He said: “The historical task of the complete reunification of the motherland must be fulfilled, and will definitely be fulfilled.”