China’s effort to expand its growing influence represents one of the largest threats to the United States, according to a major annual intelligence report released on Tuesday, which also warned that Beijing was capable of cyberattacks that could temporarily disrupt critical infrastructure in the United States.

The report puts China’s push for “global power” first on the list of threats, followed by Russia, Iran and North Korea. There are typically few broad revelations in the annual reports, which are a collection of declassified assessments, although the intelligence agencies’ ranking of threats and how they change over time can be telling.

“Beijing, Moscow, Tehran and Pyongyang have demonstrated the capability and intent to advance their interests at the expense of the United States and its allies, despite the pandemic,” the report said. “China increasingly is a near-peer competitor, challenging the United States in multiple arenas — especially economically, militarily and technologically — and is pushing to change global norms.”

The section on Iran could influence the negotiations over the United States rejoining the nuclear deal. Importantly, the intelligence agencies assess that Iran “is not currently undertaking the key nuclear weapons-development activities” needed to build a nuclear device. But Iranian leaders, the report said, are most likely to remain reluctant to engage in talks with the United States without sanctions relief.

The intelligence assessment also offered a grim assessment on Afghanistan, just days before President Biden is set to announce when he will pull the last troops out of the country. The intelligence agencies believe a prospect for a peace deal remains low and the Taliban is likely to make battlefield gains, the report said. In recent weeks, officials saying American troops should remain longer have used the assessment to reinforce their arguments. 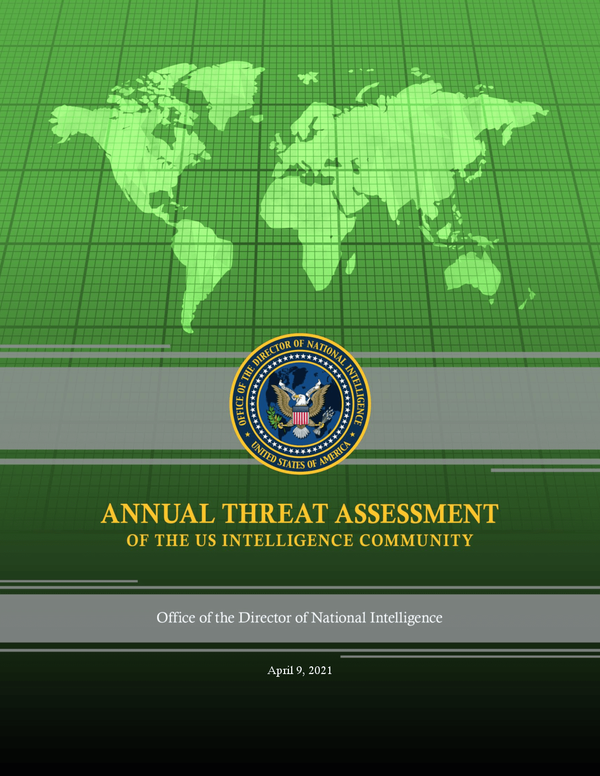 Here is the 2021 threat assessment report from the United States intelligence agencies.

China’s strategy, according to the report, is to drive wedges between the United States and its allies. Beijing has also used its success in combating the Covid-19 pandemic to promote the “superiority of its system.”

The report predicts that China will press the government of Taiwan to move forward with unification, and criticize efforts by the United States to step up engagement with Taipei. But the report stopped short of predicting any kind of direct military conflict.

China uses its electronic surveillance and hacking capabilities to not only repress dissent inside its country but also conduct intrusions that affect people beyond its borders, the report said. Also, China represents a growing threat of cyberattacks against the United States, and the intelligence agencies assess that Beijing “at a minimum, can cause localized, temporary disruptions to critical infrastructure within the United States.”

There are few surprises in the intelligence assessment of Russia. It makes clear despite many viewing Moscow as a declining power, American spy agencies still see it as a pre-eminent threat, noting how a Russian supply chain hacking operation created vulnerabilities in some 18,000 computer networks worldwide. The assessment said while Russia would avoid direct conflict with America, it would use influence campaigns, mercenary operations and military exercises to advance its interests and undermine those of the United States.

While the report emphasizes the traditional kinds of national security threats facing the nation, it does give a nod to the challenges of climate change and global pandemics, which the Biden administration has said the intelligence agencies will study more closely. The threats, for the most part, are long term, but can also have short-term impacts, the report said.

“The American people should know as much as possible about the threats facing our nation and what their intelligence agencies are doing to protect them,” said Avril B. Haines, the director of national intelligence, whose office released the report.

The new report will be followed by congressional testimony by Ms. Haines; William J. Burns, the C.I.A. director; and other top intelligence officials on Wednesday and Thursday.