With violent rhetoric from the right intensifying, some election officials are bolstering their defenses. Others are quitting. 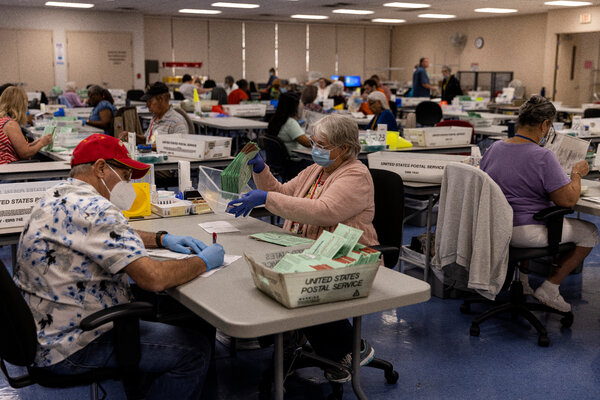 In Wisconsin, one of the nation’s key swing states, cameras and plexiglass now fortify the reception area of a county election office in Madison, the capital, after a man wearing camouflage and a mask tried to open locked doors during an election in April.

In another bellwether area, Maricopa County, Ariz., where beleaguered election workers had to be escorted through a scrum of election deniers to reach their cars in 2020, a security fence was added to protect the perimeter of a vote tabulation center.

And in Colorado, the state’s top election official, Jena Griswold, the secretary of state and a Democrat, resorted to paying for private security out of her budget after a stream of threats.

As the nation hurtles closer to the midterm elections, those who will oversee them are taking a range of steps to beef up security for themselves, their employees, polling places and even drop boxes, tapping state and federal funding for a new set of defenses. The heightened vigilance comes as violent rhetoric from the right intensifies and as efforts to intimidate election officials by those who refuse to accept the results of the 2020 election become commonplace.

Discussing security in a recent interview with The Times, Ms. Griswold, 37, said that threats of violence had kept her and her aides up late at night as they combed through comments on social media.

At a right-wing group’s gathering in Colorado earlier this year, she said, a prominent election denier with militia ties suggested that she should be killed. That was when she concluded that her part-time security detail provided by the Colorado State Patrol wasn’t enough.

“They called for me to be hung,” said Ms. Griswold, who is running for re-election. “It’s a long weekend. I’m home alone, and I only get seven hours of State Patrol coverage.”

Even in places where there was never a shadow of a doubt about the political leanings of the electorate, election officials have found themselves under threat. In a Texas county that President Donald J. Trump won by 59 percentage points in 2020, all three election officials recently resigned, with at least one citing repeated death threats and stalking.

One in five local election officials who responded to a survey earlier this year by the Brennan Center for Justice said that they were “very” or “somewhat unlikely” to continue serving through 2024.

The collective angst is a recurring theme at workshops and conferences attended by election officials, who say it is not unusual for them exchange anecdotes about threatening messages or harassment at the grocery store. The discussions have turned at times to testing drop boxes — a focus of right-wing attacks on mail-in voting — to see if they can withstand being set on fire.

The State of the 2022 Midterm Elections

With the primaries winding down, both parties are starting to shift their focus to the general election on Nov. 8.

Benjamin Hovland, a member of the U.S. Election Assistance Commission, described the intimidation campaign as pervasive.

“This isn’t a red-state issue or a blue-state issue,” Mr. Hovland said in a recent interview. “This is a national issue, where the professional public servants that run our elections have been subjected to an unprecedented level of threats, harassment and intimidating behavior.”

In guidance issued in June, the Election Assistance Commission allowed for federal election grants to be used for physical security services and to monitor threats on social media.

In Wisconsin’s Dane County, which includes Madison, partisan poll watchers and a brigade of lawyers with the Trump campaign descended in 2020 to dispute the election results. County officials recently budgeted $95,000 to start designing a new and more secure election center.

The move came after the U.S. Department of Homeland Security conducted a risk assessment in April on the current election offices for the county and city, which are housed in the same building.

“It’s kind of a sieve,” Scott McDonell, a Democrat and the county’s clerk for the past decade, said in an interview.