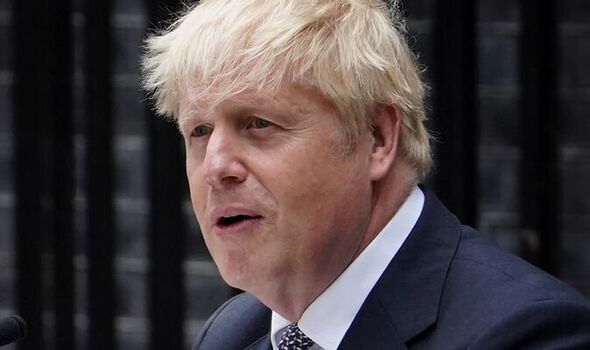 Many Conservatives remain disillusioned by the way Mr Johnson was forced from No10.

The Prime Minister remains the firm favourite among the party faithful as the best person for the job, according to a new YouGov survey.

The poll found that if given a choice between Mr Johnson, or the two candidates vying to replace him, 40 percent of Tory members would back sticking with the incumbent.

At least 14,000 Conservative members have put their names to a petition demanding a change to the party’s leadership rules in order to put Mr Johnson’s name on the ballot paper.

Last night Express.co.uk revealed lawyers representing former party treasurer Lord Cruddas and other members of the Boris on the Ballot campaign have written to senior figures in the Conservative Party issuing an ultimatum.

They have threatened to take legal action to have Mr Johnson’s name included on the ballot unless they receive a response to their petition by this Friday.

The YouGov survey of 1,043 Conservative party members found that 51 percent believed the former Chancellor was wrong to have quit his Cabinet post, while 40 percent supported his decision.

Mr Sunak’s resignation from Mr Johnson’s top team has been perceived as the catalyst that led to the ousting of the Prime Minister from office.

At a hustings event on Monday evening in Exeter, there was a huge round of applause when the Richmond MP was asked by one party member if he was a loyal person given his part in the undoing of Mr Johnson.

“I wanted to give him the benefit of the doubt as long as I could,” Mr Sunak responded as he sought to defend his actions.

“But it got to a point where the Government found itself on the wrong side of yet another ethical divide that was hard for me to defend.”

He added: “I thought that both our party and our country deserved better.”