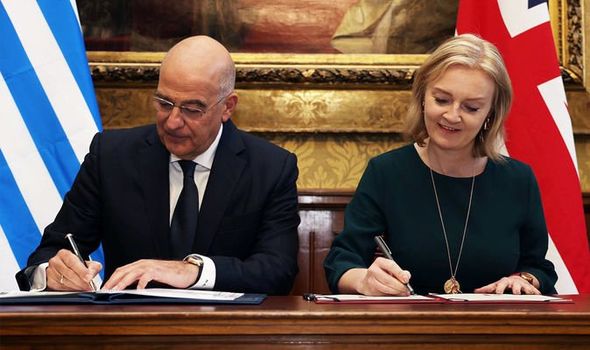 Taking to Twitter, Liz Truss announced the signing of a groundbreaking agreement with Greece. Today she welcomed Greek foreign minister, Nikos Dendias, for the signing of a strategic framework between the United Kingdom and the Hellenic Republic of Greece.

The Minister for Women and Equality detailed the Greek deal in a tweet to her 145.2k followers.

Ms Truss, the previous International Trade Secretary who replaced Dominic Raab as Foreign Secretary last month, explained that the deal will “deepen trade and security ties” between the UK and Greece.

There is also hope that the framework will aid digital cooperation between the two countries.

“We are strengthening links with friends across Europe and with our NATO allies, forging a network of liberty across the globe”.

It comes as the latest in a series of successful trade deals struck by Liz Truss, with the most recent prior to this being the trade agreement between the UK and New Zealand.

After 16 months of negotiations, the deal, which was agreed upon in principle on Wednesday will open up the UK’s agriculture markets.

Her most recent venture, the UK-Greece Strategic Bilateral Framework, will build on the strong existing relationship between the UK and Greece.

In a further statement, Ms Truss explained that the deal will “open up new opportunities for trade and investment” in both the UK and Greece.

She identified that both countries are committed to working together to promote stability and security as NATO allies.

Both Greece and the UK will work co-operatively in the face of security threats from malign actors.

Her statement reads: “The framework we’ve signed with Greece will open up new opportunities for trade and investment in both countries, enabling better cooperation between businesses, investors and industry, and builds on strong security and defence cooperation as we seek to challenge malign actors that threaten to disrupt our freedoms and way of life.