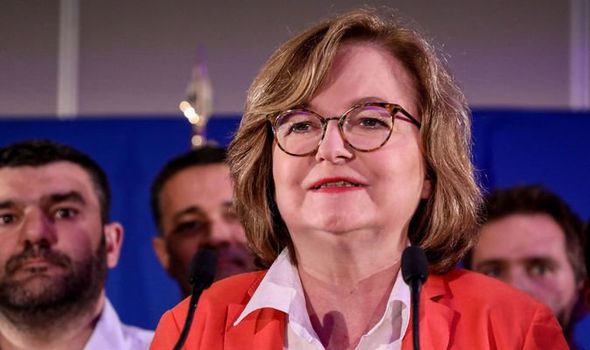 Mme Loiseau, France’s former European affairs minister, said in a Twitter post on Tuesday: “Emmanuel Macron’s message is clear: The EU does not want an agreement at any price with London. “Boris Johnson might be in a rush, but we Europeans remain focused.”

The centrist MEP was referring to remarks made several days earlier by President Macron, who warned he was “not sure” whether it would be possible for the European Union and Britain to reach a post-Brexit trade deal by the end of the year.

The 42-year-old Frenchman told representatives of the French fishing industry at a farm show in Paris on Saturday: “It is going to become tenser because [the British] are very tough

“Boris Johnson has a card in his hand and it is fishing and with that, he will try to gain access to the market.”

He added: “I am not sure than an agreement will be reached between now and the end of the year.”

Britain left the bloc on January 31 and the two sides have been talking tough in the run-up to a new round of negotiations on their future relationship.

They have given themselves just 11 months to strike a deal.

The EU is asking for far-reaching guarantees of fair competition.

Brussels insists any post-Brexit accord must prevent distortions of trade and unfair competitive advantages so as to ensure a sustainable and long-lasting relationship.

He has also firmly rejected a British suggestion that City of London companies could be given broad, permanent access to EU markets without conditions.

However, a no-deal Brexit does not seem to frighten the British government, which insists it will not be shackled to the bloc’s rules on the so-called level playing field.

Mr Johnson’s Europe advisor David Frost said last week: “We are not frightened by suggestions there will be trade frictions.

“We are not asking for anything special; we are asking for a simple free trade agreement.”

The Johnson government is asking for a simplified deal similar to those the EU has struck with Canada, Japan and South Korea that reduce tariff barriers to near zero, but which have less strict controls on standards.

Europeans consider such deals acceptable on tariffs and quotas, but too weak on provisions to guarantee free trade.

If it does not get what it wants, Britain has threatened to walk away and instead trade on only the most basic terms with the EU bloc.