Trade deal negotiations are yet to begin but already the UK and EU are at loggerheads over the conditions around the future trading relationship between the two sides.

Boris Johnson wants a Canada-style agreement with Brussels signed before the end of the transition period in December, but this option has been brutally slapped down by leading EU figures, including chief Brexit negotiator Michel Barnier.

The huge gap between the two sides has once again increased the likelihood of a no deal Brexit scenario, and Britain leaving the EU abiding by rules set by the WTO.

If UK left on WTO rules it would have total regulatory freedom. EU’s worst nightmare

But in a rallying cry, veteran broadcaster Mr Neil tweeted: “I do wish British journalists — esp Brussels-based — would stop repeating the false mantra that the EU holds all the cards in upcoming negotiations.

“It holds many, perhaps more than UK.”

“But if UK left on WTO rules it would have total regulatory freedom. EU’s worst nightmare.”

European Commission President Ursula von der Leyen claimed the EU would be “fine” with Britain leaving the bloc on EU terms, after she accused Boris Johnson of backsliding on promises to sign an ambitious free-trade agreement with Brussels – in a no deal challenge to the Prime Minister. 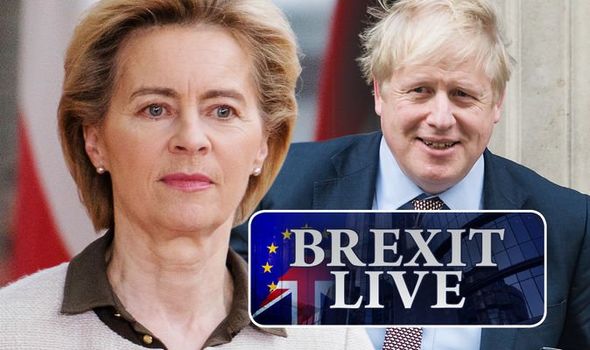 She voiced concerns over the Prime Minister’s move towards an “Australia-style” in order to avoid EU’s so-called “level-playing field” demands on rules and standards.

Ms von der Leyen said: “Australia, without any doubt is a strong ever like minded partner, but the European Union does not have a trade agreement is Australia.

“We are currently trading on WTO terms. And if this is the British choice. Well, we are fine with that without any question.” 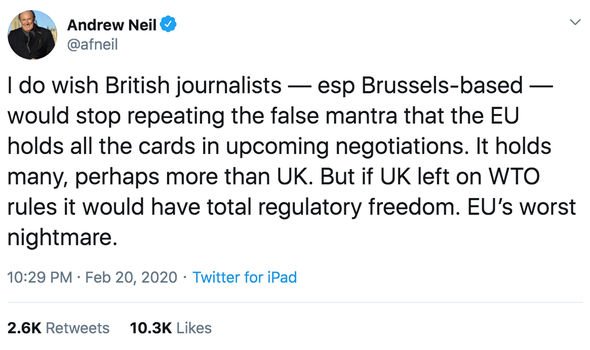 8.27am update: Brexit doesn’t mean we need to give up ambitions – Macron warning to EU leaders

Emmanuel Macron has warned fellow EU leader Brexit cannot be used as an excuse to cut the bloc’s trillion euro budget or limit the European Project.

The EU27 are bitterly divided over how to fill the huge €75billion (£63billion) Brexit has blown in the EU’s coffers.

Britain would still have been a key contributor to the EU budget over seven years from 2021 if it was still a member state.

Mr Macron said as he arrived at the first summit since Britain left the bloc on January 31: “It is unacceptable to think that because the UK is no longer part of the EU, we need to give up on our ambitions.

“For me there is no compromise if we’re compromising European ambitions.”

7.56am update: Transition period will NOT be extended beyond December – economists poll

The transition period for the UK and EU to agree a post-Brexit trade deal will not be pushed beyond the December deadline, according to over two-thirds of economists polled by Reuters.

Boris Johnson has pledged the transition period wo;; not be extended beyond this year, and 24 of 34 economists polled by Reuters from February 17-20 agreed.

More than 90 percent of those polled said the most likely result was a EU-UK free-trade agreement.

Peter Dixon at Commerzbank said: The UK government is unlikely to want to cross what appears to be such a major red line by agreeing an extension.

“Instead, the government will likely try and secure a narrow trade deal in areas where the UK’s economic interests are best served.”

Sir John Curtice has outlined the EU’s biggest fears ahead of critical negotiations with Britain on a post-Brexit trade deal.

During an interview with Express.co.uk, Sir John claimed the EU was fearful the UK would “crash out” with no deal and still remain prosperous.

He added, at the other side of the spectrum, the EU would not like to see the UK retain the benefits of being a member in a newly formed trade relationship.

Sir John said: “At the end of the day what the European Union would be concerned about on Brexit is the UK crashing out without a trade deal.

“The EU would not like the UK to crash out without a deal and not particularly suffer.

“They wouldn’t like Britain to manage to negotiate whatever difficulties that arise relatively successfully.

“Equally, you will have to bear in mind what other things the EU won’t want to come out of this post-Brexit trade negotiation process.

“They don’t want the UK to leave the EU and still retain most of what they would regard as the advantages of membership.

“They will not want to go down that path either.”