Brandon Lewis, speaking on the BBC’s Andrew Marr show, said: “We’ve got to make sure that we are delivering for people in Northern Ireland, that we get the flexibility so that people in Northern Ireland have the same experience as they would anywhere else in the United Kingdom in terms of being able to receive products and goods.” He added that, “now that’s a two-way thing and the EU needs to show the flexibility that they keep talking about”.

Mr Lewis, the Northern Ireland Secretary, stated that the UK Government would act to “rectify” the “big disruption” caused by the post-Brexit Irish Sea trading arrangements with Northern Ireland.

Mr Lewis blamed the problems attributed to the Protocol on the EU’s “purist” implementation.

The Protocol was agreed by the EU and UK as a way to keep the land border on the island of Ireland free-flowing and ensure agreement corresponds with the Good Friday Agreement, 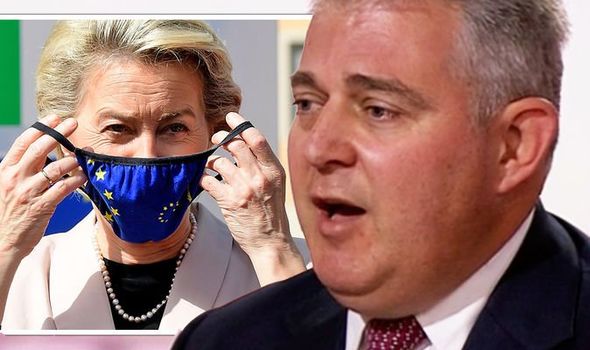 It is expected that DUP MP Jeffery Donaldson will become the new party leader at a vote to be held next week.

Mr Donaldson that his priority as party leader “will be to right the wrong that has been done by the imposition of this Northern Ireland Protocol”.

Contentions have arisen because there will be a prohibition on British chilled meats entering Northern Ireland, due to begin this week.

However, the EU has said it would be willing to give the UK permission to extend a temporary exemption period from the ban for a further three months.

This would allow the UK time to find an alternative solution.

However, Northern Ireland loyalists have stated that tensions could boil over to violence as they see the Protocol as a threat to their British identity.