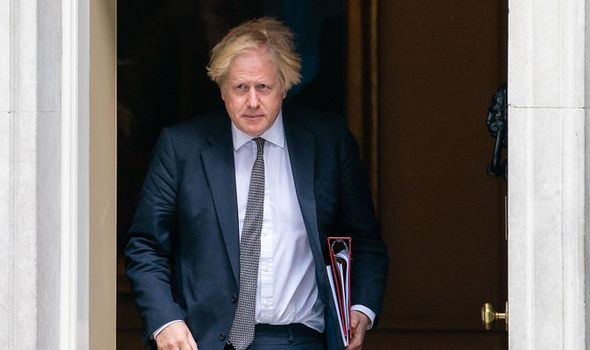 The Prime Minister added that the last two decades had proven that al-Qaeda did not lead “us to abandon our values” despite the continuing threat.

Some 67 Britons were among those who died when suicide attackers seized US passenger jets and crashed them into the World Trade Center’s twin towers in New York on September 11, 2001.

Mr Johnson said: “On a crystal clear morning, terrorists attacked the United States with the simple goal of killing or maiming as many human beings as possible.

“By inflicting such bloodshed in the world’s greatest democracy, they tried to destroy the faith of free peoples everywhere in the open societies, which terrorists despise and which we cherish.

“And it is precisely because of the openness and tolerance of the United States that people of almost every nationality and religion were among the 2,977 murdered on that day, including 67 Britons, each of them a symbol of the eternal friendship between the United Kingdom and the United States.

“But while the terrorists imposed their burden of grief and suffering, and while the threat persists today, we can now say with the perspective of 20 years that they failed to shake our belief in freedom and democracy.

“They failed to drive our nations apart, or cause us to abandon our values, or to live in permanent fear.

“The fact that we are coming together today – in sorrow but also in faith and resolve – demonstrates the failure of terrorism and the strength of the bonds between us.” The al-Qaeda attacks led to the US invasion of Afghanistan, backed by the UK, to crush the group.

Mr Johnson said the crisis in the nation after military forces withdrew last month has strengthened the determination to “remember those who were taken from us”.

And to “cherish the survivors and those who still grieve and hold fast to our belief in liberty and democracy, which will always prevail over every foe”.

He sent the defiant message in a video recording that will be played at a memorial event in London’s Olympic Park, where a 9/11 statue forged from the twisted steel of Ground Zero is on display.

The twin towers were hit first, followed by the western face of the Pentagon. Then the United Airlines Flight 93 crashed in a field in Shanksville, Pennsylvania after passengers fought back. It is believed to have been destined for the Capitol Building in Washington DC.

US President Joe Biden will attend memorials in New York and Pennsylvania today as well as a service at the Pentagon, where a light installation is being staged to mark the anniversary. Services of remembrance are being held by US embassies around the world.

Labour’s Jack Straw, foreign secretary at the time of the attacks, said lessons must be learnt from the invasion of Afghanistan.

He said the motivation was for al-Qaeda and “its protectors”, the Taliban, to be “stopped from ever organising another 9/11 from a safe haven in Afghanistan”. He told The House magazine: “I didn’t see this at the time, but the fundamental mistake we made was to believe theTaliban was out as well as down.

“Military planners and historians will need to learn from our errors.

“The US will need the painful lesson – not for the first time – that it is hearts and minds which ultimately wins a peace, not firepower. And we will all have to swallow hard and deal with the Taliban unless and until that becomes impossible.

“International pressure, and aid, will both be necessary, not least if girls are to continue to be educated and women to work.”

Former prime minister Tony Blair said the international community must be prepared to take action against the Taliban if it again becomes a terror base.

He said the allies had no choice but to invade after the Taliban refused to give up the al-Qaeda leadership who were responsible.

“I don’t think if we’d left them alone after that or taken some counterterrorism measures – sent some special forces in, tried to take out the leadership – I don’t think the movement would then have died or gone away.