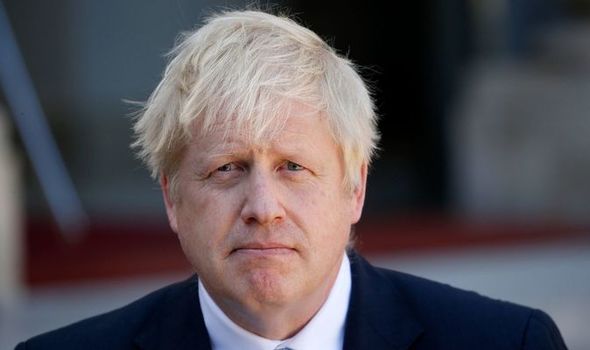 As the diplomatic row with France continues, the Sunday Express has learnt that the Prime Minister held a summit with members of theTory Party’s Common Sense Group of MPs in Downing Street on Wednesday.

They were summoned to discuss the migration issue, which is causing increasing unrest in the party.

An MP at the meeting said: “The issue of the Human Rights Act was raised and the Prime Minister was very positive in his response.

“He told us ‘That’s why I appointed Dominic Raab to the job [of Justice Secretary]’ – to bring in the reforms needed.”

Mr Raab, who is also Deputy Prime Minister, was responsible for drawing up David Cameron’s plans to replace the Human Rights Act, which was brought in by Tony Blair, with a much narrower British Bill of Rights.

Critics of the Human Rights Act claim it has stopped the Government from tackling the migrant crisis, not least because it makes deportation more difficult.They argue it is one of the reasons only five Channel migrants have been deported in the past year.

Another MP said: “I will believe it when I see it but the meeting with the boss [Mr Johnson] was very positive and I feel more confident that there is a will to tackle this issue once and for all.”

The news comes as tensions continue between France and the UK in the aftermath of last week’s Channel tragedy.

Paris withdrew an invitation to Home Secretary Priti Patel to attend a meeting of ministers from key European allies in Calais.

France was angered by Mr Johnson releasing a letter he sent to Emmanuel Macron setting out his proposals, including reiterating a call for joint UK-French patrols by border officials along French beaches to stop boats leaving, which Paris has resisted.

He insisted “nobody is proposing breaching sovereignty” amid concerns over the request for UK officials to join the patrols.

The Government is already planning to bring in changes to the Nationality and Borders Bill, which is before Parliament this week. One change is aimed at making it easier to deport people who overstay their visas.

Ms Patel wants to increase the maximum penalty for overstaying a visa from six months to four years in prison.

She believes this will deter people from breaking the rules and send a signal to the whole criminal justice system including police, prosecutors and courts that it should be taken seriously. Longer sentence lengths will also make it easier to deport someone.

Tom Pursglove, Minister for Justice andTackling Illegal Migration, said: “Rightly, the public believe that if people are here, they must be here legally – this change ensures that those who don’t play by the rules are properly punished.”

But inside the party there is recognition that action needs to be taken ahead of any changes in the law, which will not come into effect until next year.

One MP who attended the meeting said: “The Prime Minister told us he has a plan but did not want to reveal the details yet. But he asked us for his support when he reveals it because he is concerned about the wets in our party who oppose tough measures to deal with these problems.

“Of course we said that we would.”