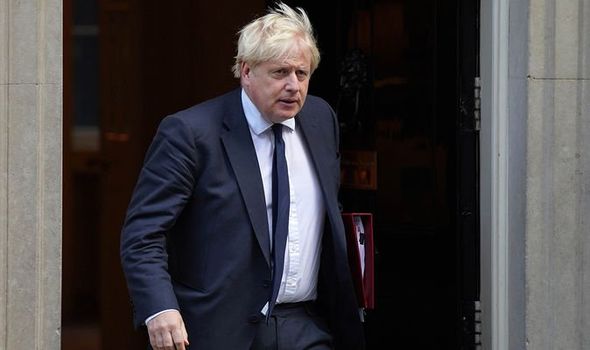 The Prime Minister laid down the gauntlet as he insisted the government’s new internet safety laws will crack down on online hatred and extremism.

His promise comes in the wake of the brutal murder of Sir David Amess in a terrorist-related attack.

Since the killing MPs have spoken of the sickening and constant online abuse they suffer – including death threats – on a daily basis.

The new legislation is expected to force the biggest tech firms, such as Facebook and Google, to abide by a duty of care to users, overseen by Ofcom as the new regulator for the sector.

Mr Johnson told MPs the Online Harms Bill will make progress in the Commons before Christmas.

However some campaigners have raised fears that it risks stifling the free press, silencing marginalised voices and will introduce state-backed censorship.

Speaking during Prime Minister’s Questions, Mr Johnson said: “The safety of MPs, indeed of all public servants, is of vital importance. The Online Safety Bill is of huge importance, it’s one of the most important tools in our armoury.”

He added: “What we’re doing is ensuring that we crack down on companies that promote illegal and dangerous content and we’ll be toughing up those provisions.

“What we’re also going to do is ensure that the Online Safety Bill does complete its stages before this House before Christmas.”

He agreed to work with Labour leader Sir Keir Starmer on the issue.

Speaking in the Commons, Sir Keir questioned why directors of platforms failing to crack down on extremism would not face criminal sanctions under the Government’s plans.

Mr Johnson later responded: “I’ve already said that we are willing to look at anything to strengthen the legislation.

“And, yes, of course we will have criminal sanctions with tough sentences for those who are responsible for allowing this foul content to permeate the internet.”

The debate over MPs security intensified this week after Communities Secretary Micahel Gove was ambushed by anti-lockdown protesters as he walked through Westminster.

But Business Secretary Kwasi Kwarteng said politicians must not be separated from the public.

“But I think the link with the constituents, with voters, our electorate is really important and I wouldn’t want to see that in any way diminished or us as MPs, as politicians, sort of put in a glass cage, separated from voters.”

Video footage, which is being examined by the Metropolitan Police, showed demonstrators swarm Mr Gove before police officers formed a protective ring around the MP and helped him make his way into a nearby building.

On Wednesday the mother of Mr Gove’s children, Sarah Vine, wrote in her newspaper column about the harassment the family have faced.

Ms Vine described feeling “under siege, in constant fear of attack”, and wrote: “As a family, we’ve had so much abuse directed at us over the years because of politics. So much hate and lies and vitriol.

“I’ve had to hold my trembling teenage daughter as she’s weathered the foulest of online abuse as a result of malicious stories about her father.

“I watched her 18th birthday ruined by some nasty little piece of excrement who sent her a card threatening to kill her father if she didn’t acquiesce to their demands.

“I’ve seen my son’s eyes widen in fear, his hackles rise, as he’s witnessed his dad being abused in the street.

“That same dad was jostled and mobbed by anti-lockdown protesters only yesterday, and police officers rushed to help steer him away from them.”

Metropolitan Police Commissioner Dame Cressida Dick said that officers have spoken to all London MPs in the past few days to discuss security arrangements and their planned appointments.

She said: “We take the security of elected representatives extremely seriously. We do have a system in place to try to ensure that Members of Parliament receive the right advice and support around their security, and in the last few days I can tell you that we have spoken to all London MPs (to) discuss their security arrangements and their staff’s, and their upcoming appointments.”