Hospitality venues in England have been shut since the start of the year due to the need for a third national lockdown to combat the pandemic. The Prime Minister had been looking forward to enjoying a drink in public on April 12 with outdoor hospitality to re-open.

However, Mr Johnson has announced a change of plans as the UK enters a period of official mourning following the death of the Duke of Edinburgh.

The Uxbridge MP had spoken of his excitement at having booked his spot at the pub and how much he was looking forward to having a pint.

He said at a televised coronavirus briefing earlier this week: “On Monday the 12th I will be going to the pub myself – and cautiously but irreversibly raising a pint of beer to my lips.”

Until the funeral of the senior royal most Government activity will stop, with only essential coronavirus announcements expected. 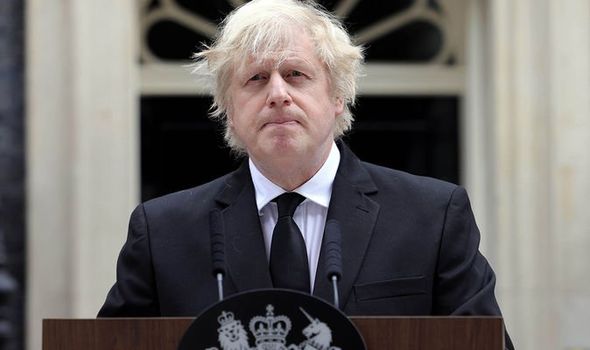 Ministerial visits and television interviews will be cancelled with the Prime Minister scrapping his planned trip to a pub on Monday to mark the beginning of step two of his coronavirus roadmap.

While Mr Johnson has postponed his own personal pub visit, officials have said the reopening of hospitality will not be impacted by the period of mourning following Prince Philip’s death.

Speaking outside Downing Street this afternoon, the Prime Minister paid tribute to the Duke’s “extraordinary life” of public service.

“Prince Philip earned the affection of generations here in the United Kingdom, across the Commonwealth and around the world,”  he said.

“He helped to steer the Royal Family and the monarchy so that it remains an institution indisputably vital to the balance and happiness of our national life.

“He was an environmentalist, and a champion of the natural world long before it was fashionable.

“With his Duke of Edinburgh awards scheme he shaped and inspired the lives of countless young people and at literally tens of thousands of events he fostered their hopes and encouraged their ambitions.”

The Prime Minister added: “We remember the Duke for all of this and above all for his steadfast support for Her Majesty the Queen.

“Not just as her consort, by her side every day of her reign, but as her husband, her “strength and stay”, of more than 70 years.

“And it is to Her Majesty, and her family, that our nation’s thoughts must turn today.

“Because they have lost not just a much-loved and highly respected public figure, but a devoted husband and a proud and loving father, grandfather and, in recent years, great-grandfather.”