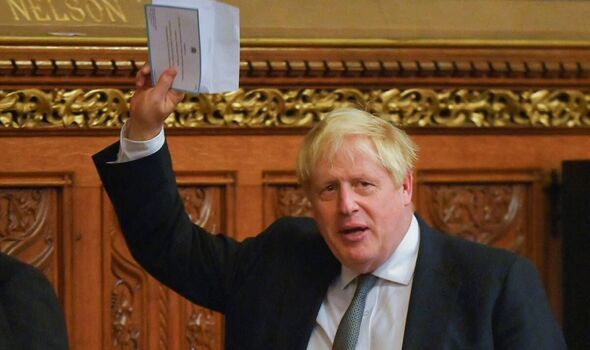 The pair are backing a Bill which would gives ministers authority to ignore European judges’ rulings on deportations. The Asylum Seekers (Removal to Safe Countries) Bill was introduced by Tory MP Jonathan Gullis yesterday.

If passed it would “ensure that Parliament, not unaccountable foreign judges in Europe, have the final say”.

Mr Gullis told Talk TV: “Boris Johnson was very pleased to back a Bill that enacted what he and Priti had been working on side by side.

“There was no mention of the Prime Minister. In fact, Boris has only ever given his full support, in any conversation I’ve ever had, for Rishi Sunak.”

He added: “Having Boris Johnson, Jacob Rees- Mogg, Nadine Dorries – all these other co-signatories – are very sound Members of Parliament who I’m very proud to work alongside.”

The move came after the PM unveiled his own plans to crack down on illegal immigration.

He aims to ban asylum seekers coming to the UK in small boats across the Channel.

Mr Sunak wants to clear the backlog of asylum claims and house migrants in ex-holiday parks rather than hotels.

And he vowed to “restart” the flights to Rwanda.

The Home Office said there were more than 143,000 asylum seekers waiting for a decision on their claims in the year to September while 100,000 had waited more than six months.

More than 44,000 have crossed the Channel to the UK by small boats this year.

In April, then-Home Secretary Ms Patel signed a deal to send migrants to Rwanda but the policy was grounded by legal challenges. High Court rulings are due on Monday.