Boris Johnson appears to have outmanoeuvred Brussels and senior EU figures, including Emmanuel Macron and Angela Merkel, amid a tense clash between the two sides. Mr Johnson has recruited key member states allies inside the EU to push back against European Commission and Ursula von der Leyen’s plan to block vaccine exports to the UK. Both Mr Macron and Ms Merkel have backed the EU plan which could hit 20 percent of the UK’s vaccine supply. 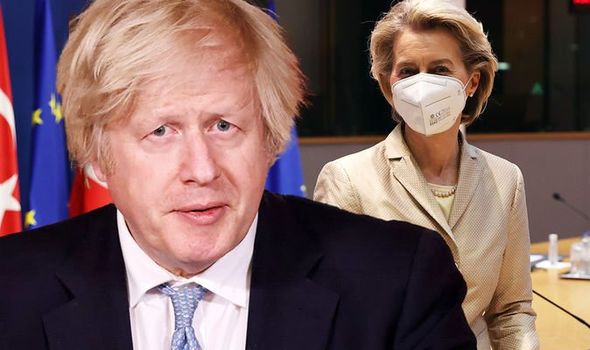 However, Britain has “recruited” key allies in Belgium, the Netherlands and Ireland – all of whom are urging Brussels to stand down.

Daily Telegraph Deputy Political Editor Lucy Fisher told the BBC’s Andrew Marr Show: “We are scaling up now for a pretty tense week with the EU.

“This a subject that will be discussed at the EU Council summit on Thursday.

“It’s worth noting there isn’t a consensus in the bloc over how to treat this threat of a blockade, or what the Mail on Sunday calls ‘holding doses hostage from the UK’.

“France and Germany appear to be backing the European Commission’s Presidents threat.

“But, Boris Johnson does seem to have done a good job in recruiting allies in Belgium, the Netherlands, Ireland – all of whom are much more reluctant to engage in this trade war.”