Monday night saw the first debate between the former Chancellor and the current Foreign Secretary on BBC One. After the head-to-head ended, Opinium held a snap poll on who performed better, surveying both Labour and Tory voters among others.

However, the poll found Labour voters appeared to prefer the former Chancellor.

Data said 41 percent of Labour voters in the survey thought Mr Sunak did better while 30 percent preferred the Foreign Secretary. 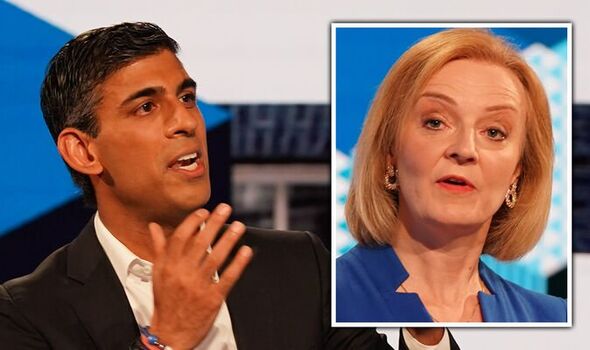 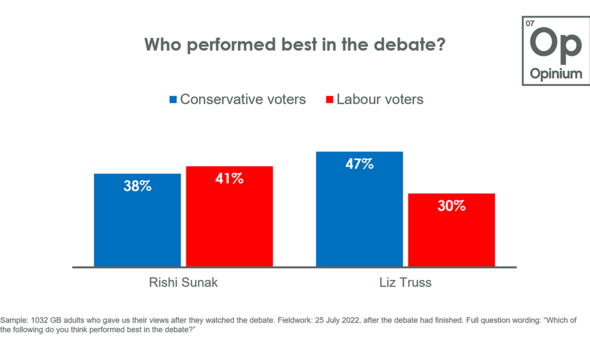 Overall, surveying 1,032 British adults, Opinium held voters could not decided between Mr Sunak and Ms Truss, with just one point dividing the pair.

Of those surveyed, 43 percent also said the Conservatives should elect Mr Sunak.

Another 41 percent said they should elect Ms Truss, and the remaining 12 percent did not know or abstained. 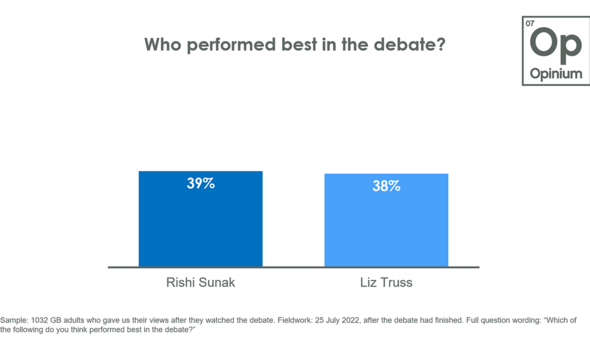 The former Chancellor hit out at Ms Truss during the debate, saying her tax cut plan would “tip millions of people into misery” and cost the Tories the next election.

Ms Truss wants to scrap the rise to National Insurance, a planned rise in corporation tax and would temporarily scrap green levies on energy bills to be paid for through borrowing.

Mr Sunak suggested her plans would lead to higher interest rates, but Ms Truss dismissed this as “scaremongering” and “project fear”.