SELMA, Ala. (Reuters) – Joe Biden, fresh off a victory in South Carolina propelled by black voters, on Sunday commemorated a landmark civil rights march in Alabama, where some worshippers at an African-American church turned their backs on his rival Michael Bloomberg.

Biden and the others competing for the Democratic nomination to challenge Republican President Donald Trump in November hit the campaign trail before Super Tuesday nominating contests in 14 states including Alabama. Biden, whose win in Saturday’s South Carolina primary galvanized his campaign, and the current front-runner, Bernie Sanders, traded jabs on Sunday news shows.

Bloomberg, a former New York mayor, received a chilly reception at the historic Brown Chapel AME Church in Selma after pastor Reverend Leodis Strong told the gathering the billionaire businessman initially had turned down the invitation to speak.

About 10 people stood up and turned their backs on Bloomberg as he spoke about racial inequality. Black voters are a key constituency of the Democratic Party.

“I think it’s just an insult for him to come here. It’s the disrespect for the legacy of this place,” Lisa Brown, who traveled to Selma from Los Angeles, told Reuters later. She said the idea to protest Bloomberg’s remarks had circulated but she stood as an individual, not an organized group.

The quiet protest suggests Bloomberg may have an uphill climb with some African-American voters, who have supported Biden in large numbers and carried him to a resounding victory in South Carolina.

Biden and Bloomberg are trying to present themselves as the party’s best choice to take on Trump, arguing that Sanders is too far to the left to win the general election.

At church in Selma, the vice president to the country’s first African American president, Barack Obama, was clearly the favorite. Biden was seated in a place of honor with the pastor, facing the pews where Bloomberg sat, and got a glowing introduction from U.S. Representative Terri Sewell, a black Alabama lawmaker who supports him.

“Most importantly, he has earned the right to be in this pulpit and to address you now,” Sewell said.

Democratic contenders Elizabeth Warren and Amy Klobuchar sat on folding chairs at the margins of the church audience. The pastor yelled at Tom Steyer, who dropped out of the race after finishing third in South Carolina, to sit down. “This is a house of God, this is not a political rally,” he chided.

The candidates were in Selma to mark the 55th anniversary of “Bloody Sunday,” when civil rights marchers were beaten by state troopers and local police while crossing a bridge in Selma.

Bloomberg skipped the first four state nominating contests including South Carolina but has blanketed the nation with about $500 million in advertising and will be on the ballot for the first time on Tuesday, when the biggest prizes are California and Texas. 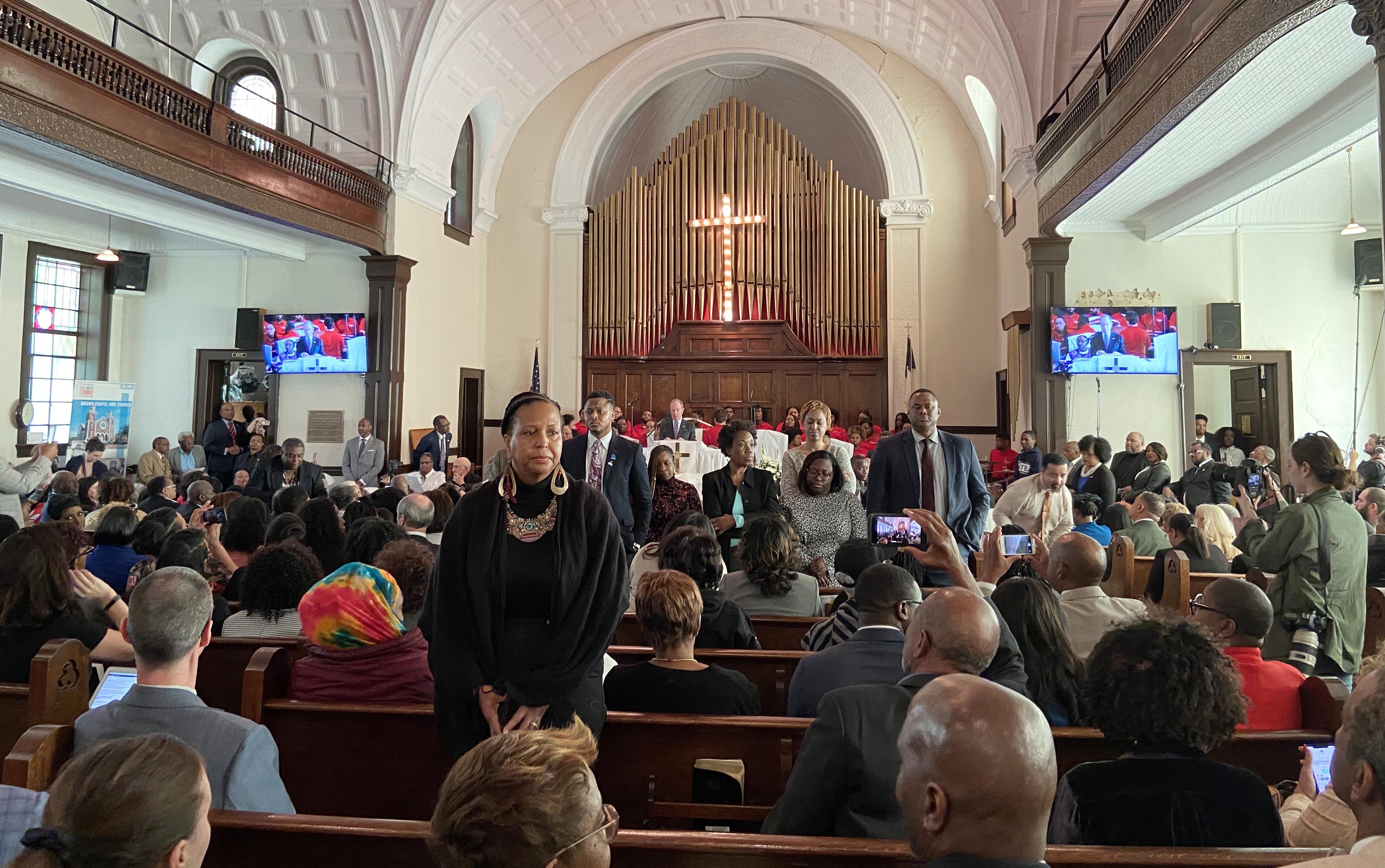 He has made a concerted effort to reach out to black voters, including apologies for overseeing an increase in the use of a police practice called “stop and frisk” in New York City that disproportionately affected black and other racial minority residents. A federal judge found the practice was an unconstitutional form of racial profiling.

A Reuters/Ipsos poll of registered Democrats and independents, conducted Feb. 19-25, showed Bloomberg garnering the support of 20% of black voters, third among the Democratic candidates behind Sanders (26%) and Biden (23%).

Biden won overwhelmingly in South Carolina, drawing 48% of the votes cast compared to 20% for Sanders. Edison Research exit polls showed Biden with 61% of African-American support there to Sanders’ 17%.

The victory led the former vice president to assert himself as a viable moderate alternative to Sanders, an independent U.S. senator from Vermont and self-described democratic socialist.

Sanders’ calls for a political revolution have rattled a Democratic Party establishment worried he is too far to the left to beat Trump.

“I think the Democratic Party is looking for a Democrat – not a socialist, not a former Republican, a Democrat – to be their nominee,” Biden told “Fox News Sunday.”

Biden’s reference to a former Republican appears to have been aimed at Bloomberg, who switched parties.

Sanders attacked Biden for taking contributions from political organizations called Super PACs and billionaires, courting wealthy donors at what he said was the expense of working-class, middle-class and low-income people. 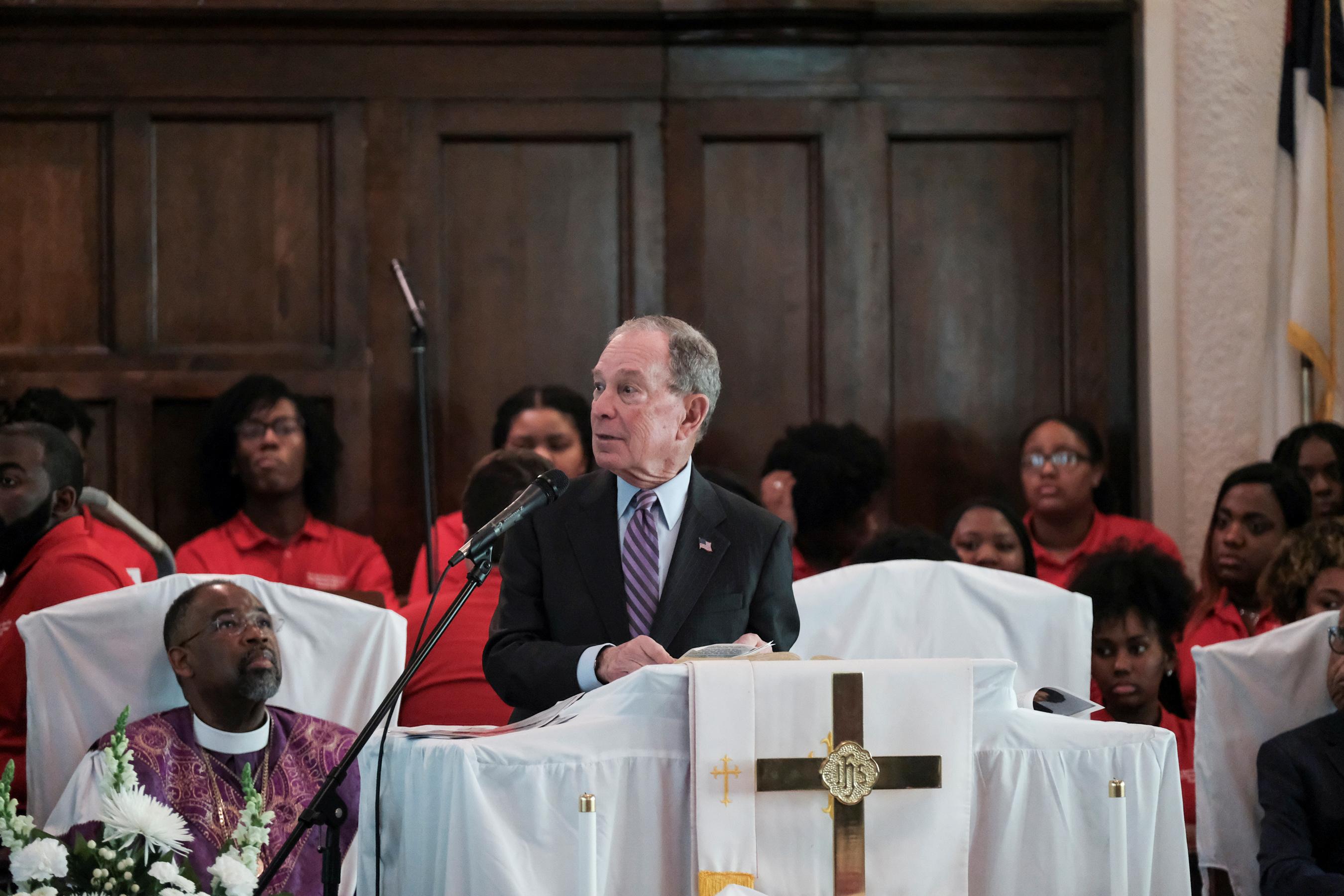 The Sanders campaign announced overnight it had raised $46.5 million from more than 2.2 million donations in February, a huge sum dwarfing what any other Democratic candidate had raised last year in any three-month period.

Bloomberg, meanwhile, continues to spend. He purchased three minutes of commercial air time during on broadcast networks CBS and NBC on Sunday evening to address the coronavirus outbreak.