President Biden unveiled a major proposal to invest in education and families, describing it as “a blue-collar blueprint to build America.” 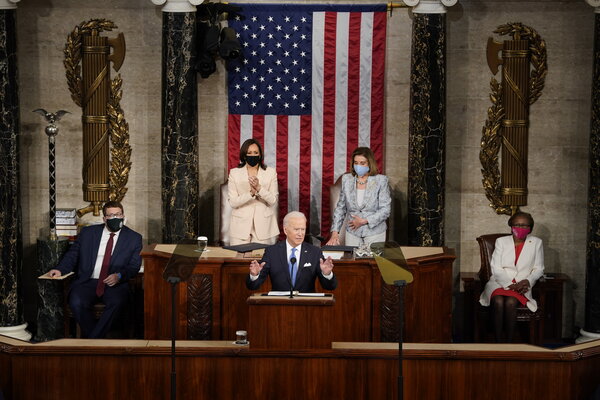 President Biden delivered an address to a joint session of Congress on Wednesday. Because of the pandemic, Mr. Biden spoke to a socially distanced audience of less than 200 lawmakers and officials, a small fraction of the packed audience that typically attends such an address.

The following is a transcript of his remarks.

While the setting tonight is familiar, this gathering is just a little bit different. A reminder of the extraordinary times we’re in. Throughout our history, presidents have come to this chamber to speak to Congress, to the nation and to the world. To declare war, to celebrate peace, to announce new plans and possibilities.

Tonight, I come to talk about crisis and opportunity. About rebuilding the nation, revitalizing our democracy, and winning the future for America. I stand here tonight one day shy of the 100th day of my administration. A hundred days since I took the oath of office, lifted my hand off our family Bible and inherited a nation — we all did — that was in crisis. The worst pandemic in a century. The worst economic crisis since the Great Depression. The worst attack on our democracy since the Civil War. Now, after just 100 days, I can report to the nation, America is on the move again. Turning peril into possibility, crisis into opportunity, setbacks to strength.

We all know life can knock us down. But in America, we never, ever, ever stay down. Americans always get up. Today, that’s what we’re doing. America is rising anew. Choosing hope over fear, truth over lies and light over darkness. After 100 days of rescue and renewal, America is ready for a takeoff, in my view. We’re working again, dreaming again, discovering again and leading the world again. We have shown each other and the world that there’s no quit in America. None.

One hundred days ago, America’s house was on fire. We had to act. Thanks to the extraordinary leadership of Speaker Pelosi, Majority Leader Schumer and the overwhelming support of the American people — Democrats, Independents and Republicans — we did act. Together, we passed the American Rescue Plan, one of the most consequential rescue packages in American history. We’re already seeing the results.

We’re already seeing the results. After I promised we would get 100 million Covid-19 vaccine shots into people’s arms in 100 days, we will have provided over 220 million Covid shots in those hundred days, thanks to all the help of all of you. We’re marshaling with your help, everyone’s help, we’re marshaling every federal resource. We’ve gotten vaccinations to nearly 40,000 pharmacies and over 700 community health centers where the poorest of the poor can be reached. We’re setting up community vaccination sites, developing mobile units to get to hard-to-reach communities. Today, 90 percent of Americans now live within five miles of a vaccination site. Everyone over the age of 16, everyone, is now eligible to get vaccinated right now, right away. Go get vaccinated, America. Go and get the vaccination. They’re available. You’re eligible now.

And more than half of all the adults in America have gotten at least one shot. The mass vaccination center in Glendale, Ariz., I asked the nurse, I said, “What’s it like?” She looked at me, she said, “It’s like every shot is giving a dose of hope” was her phrase, a dose of hope.

Parents seeing the smiles on the kids’ faces, for those who are able to go back to school because the teachers and the school bus drivers and the cafeteria workers have been vaccinated. Grandparents, hugging their children and grandchildren, instead of pressing hands against the window to say goodbye. It means everything. Those things mean everything.

You know, there’s still — you all know it, you know it better than any group of Americans — there’s still more work to do to beat this virus. We can’t let our guard down. But tonight, I can say, because of you, the American people, our progress these past 100 days against one of the worst pandemics in history has been one of the greatest logistical achievements, logistical achievements this country has ever seen. What else have we done in those first 100 days?

We kept our commitment, Democrats and Republicans, of sending $1,400 rescue checks to 85 percent of American households. We’ve already sent more than 160 million checks out the door. It’s making a difference. You all know it when you go home. For many people, it’s making all the difference in the world.

A single mom in Texas who wrote me, she said she couldn’t work. She said the relief check put food on the table and saved her and her son from eviction from their apartment. A grandmother in Virginia who told me she immediately took her granddaughter to the eye doctor, something she said she put off for months because she didn’t have the money. One of the defining images, at least from my perspective, in this crisis has been cars lined up, cars lined up for miles. And not people just barely able to start those cars. Nice cars, lined up for miles, waiting for a box of food to be put in their trunk.

I don’t know about you, but I didn’t ever think I would see that in America. And all of this is through no fault of their own. No fault of their own, these people are in this position. That’s why the rescue plan is delivering food and nutrition assistance to millions of Americans facing hunger. And hunger is down sharply already.

We’re also providing rental assistance — you all know this, but the American people, I want to make sure they understand. Keeping people from being evicted from their homes. Providing loans to small businesses that reopen and keep their employees on the job. During these hundred days, an additional 800,000 Americans enrolled in the Affordable Care Act when I established a special sign-up period to do that — 800,000 in that period. We’re making one of the largest one-time-ever investments, ever, in improving health care for veterans. Critical investments to address the opioid crisis. And maybe most importantly, thanks to the American Rescue Plan, we’re on track to cut child poverty in America in half this year.

And in the process, while this is all going on, the economy created more than 1,300,000 new jobs in 100 days. More jobs in the first — more jobs in the first 100 days than any president on record. The International Monetary Fund — the International Monetary Fund is now estimating our economy will grow at a rate of more than 6 percent this year. That will be the fastest pace of economic growth in this country in nearly four decades. America’s moving, moving forward. But we can’t stop now.

We’re in competition with China and other countries to win the 21st century. We’re at a great inflection point in history. We have to do more than just build back better — than just build back, we have to build back better. We have to compete more strenuously than we have. Throughout our history, if you think about it, public investment in infrastructure has literally transformed America, our attitudes as well as our opportunities. The transcontinental railroad, interstate highways, united two oceans and brought a totally new age of progress to the United States of America.

Universal public schools and college aid opened wide the doors of opportunity. Scientific breakthroughs took us to the moon. Now we’re on Mars, discovering vaccines, gave us the internet and so much more. These are investments we made together as one country. And investments that only the government was in a position to make. Time and again, they propel us into the future. That’s why I propose the American Jobs Plan, a once-in-a-generation investment in America itself. This is the largest jobs plan since World War II.

It creates jobs to upgrade our transportation infrastructure. Jobs modernizing our roads, bridges, highways. Jobs building ports and airports, rail corridors, transit lines. It’s clean water. And today, up to 10 million homes in America and more than 400,000 schools and child care centers have pipes with lead in them, including drinking water, a clear and present danger to our children’s health. The American Jobs Plan creates jobs replacing 100 percent of the nation’s lead pipes and service lines so every American can drink clean water.