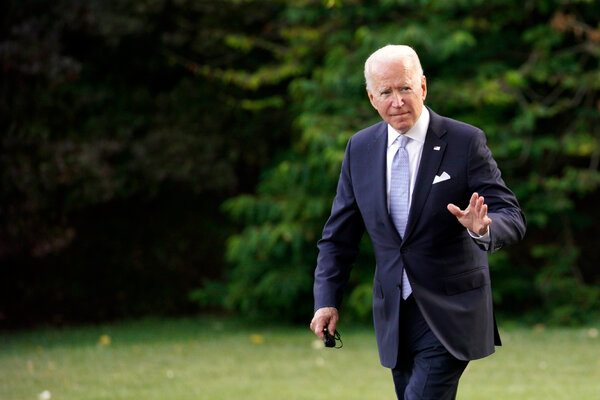 President Biden said on Thursday night that he supported a plan championed by congressional Democrats to use a legislative process intended for budget-related measures to bypass Republican opposition and legalize millions of undocumented immigrants.

Senator Chuck Schumer, Democrat of New York and the majority leader, has been quietly exploring whether it would be possible to attach a broad revision of immigration laws to a $3.5 trillion budget plan that Democrats intend to pass unilaterally through a fast-track process known as budget reconciliation.

Mr. Biden said on Thursday night that White House staff were “putting out a message right now” that “we should include in the reconciliation bill the immigration proposal.”

Mr. Biden met on Thursday with Democratic lawmakers to discuss a program known as Deferred Action for Childhood Arrivals, or DACA, that protects some immigrants, known as Dreamers, from deportation. Advocates have pushed for Democrats to provide expedited citizenship to Dreamers, amid legal challenges to DACA.

“It went very well,” Mr. Biden said of the meeting, which included members of the Congressional Hispanic Caucus and leadership of the Senate and House Judiciary Committees.

The president spoke to reporters en route to Walter Reed National Military Medical Center with his wife, Jill Biden, who was to undergo a medical procedure on her foot.

Speaker Nancy Pelosi last month endorsed the idea of using reconciliation to push through an immigration measure, citing the “budget impacts of immigration in our country.”

Republicans, however, have already called it an abuse of the reconciliation process and raised questions about whether the parliamentarian would even allow immigration legislation to advance under a procedure that is intended to deal exclusively with budget rules.

It is not clear that such a maneuver by Democrats would be successful. A team of immigration activists and researchers as well as congressional aides is currently exploring the question, digging into the best way to present the case to the parliamentarian, who has not indicated any position on the matter.