WASHINGTON — President Biden on Tuesday ended a weekslong effort to reach a deal with Senate Republicans on an expansive infrastructure plan, cutting off negotiations that had failed to persuade them to embrace his bid to pour $1 trillion into the nation’s aging public works system and safety-net programs.

It was a major setback to Mr. Biden’s effort to attract Republican support for his top domestic priority, which had always faced long odds over the size, scope and financing of the package. Most Republicans have made it clear they are willing to spend only a fraction of what Democrats want on a much narrower initiative, and balked at any tax increases to pay for it.

In a final telephone call on Tuesday with Senator Shelley Moore Capito of West Virginia, the leading Republican negotiator, after days of back-and-forth discussions, Mr. Biden made clear that the divide was too large to bridge.

The breakdown did not close off the possibility of a bipartisan compromise entirely, and the White House signaled that the president would continue seeking one. He shifted his focus to a bipartisan group of centrist senators who have been working separately on an alternative, calling three of them personally to cheer on their efforts and encourage them to work with top White House officials to hammer out a deal. But even if the group can agree on a plan palatable to Mr. Biden, there is no guarantee that enough Republicans would accept it.

In a tacit acknowledgment of the long odds, Mr. Biden also spoke with Senator Chuck Schumer, Democrat of New York and the majority leader, about beginning work on a new budget blueprint, which Democrats could use to set up the fast-track reconciliation process that would allow them to avoid a filibuster and push through a package with no support from Republicans.

Mr. Schumer said Democrats would begin that process while the bipartisan talks continued, effectively preparing a backup plan if negotiations collapse, as many lawmakers in both parties believe is inevitable.

“It may well be that part of the bill that will pass will be bipartisan, and part of it will be through reconciliation,” Mr. Schumer said, speaking at his weekly news conference. “But we’re not going to sacrifice the bigness and boldness in this bill. We will just pursue two paths, and at some point, they will join.”

The demise of Mr. Biden’s talks with Ms. Capito was the latest instance in which the president, recognizing that he could not coax Republicans into embracing his ambitious and costly economic agenda, has walked away from the kind of bipartisan negotiations he has often said are a priority.

After sitting down with Republicans early this year in search of a compromise on his $1.9 trillion pandemic aid package, Mr. Biden quickly concluded that there was no bipartisan deal to be had and Democrats moved quickly to muscle the plan through Congress over unified Republican opposition.

In both instances, Mr. Biden’s approach reflected a concern at the White House and among several Democrats in Congress that, in courting support from Republicans who have signaled they have no interest in compromising, he could be forced to scale back vital pieces of his agenda, lose valuable time to enact it, or both.

Mr. Biden had already whittled down his infrastructure proposal substantially in the talks with Ms. Capito. While his initial plan totaled $2.3 trillion, he had proposed to cut it substantially in recent days, ultimately offering $1 trillion in new infrastructure spending. Republicans had proposed only a quarter of that amount as part of a $928 billion package that mainly used money from existing programs, and Ms. Capito on Friday offered a $50 billion increase, for a total of $330 billion in new spending — an amount Mr. Biden said was not enough.

“He informed Senator Capito today that the latest offer from her group did not, in his view, meet the essential needs of our country to restore our roads and bridges, prepare us for our clean energy future, and create jobs,” Jen Psaki, the White House press secretary, said in a statement, alluding to Mr. Biden’s “disappointment” that Republicans had offered so little new spending.

Republicans called Mr. Biden’s decision to pull out of the talks a slap in the face after they offered what they considered to be the largest infrastructure proposal ever put forward by their party.

“While I appreciate President Biden’s willingness to devote so much time and effort to these negotiations, he ultimately chose not to accept the very robust and targeted infrastructure package, and instead, end our discussions,” Ms. Capito said in her own statement. 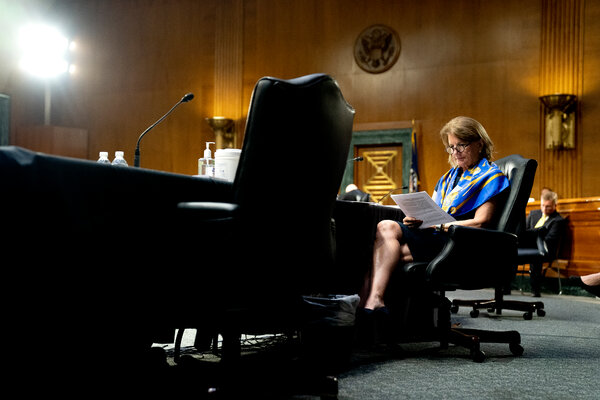 While administration officials went to great lengths to emphasize Mr. Biden’s respect for Ms. Capito as a negotiator and her efforts to reach a compromise, it was clear he had already moved on, placing his hopes for a deal on the bipartisan Senate group. He spoke on Tuesday with Senator Bill Cassidy, Republican of Louisiana, and Senators Joe Manchin III of West Virginia and Kyrsten Sinema of Arizona, both Democrats.

Mr. Biden planned to continue talking with members of the group while traveling to Europe this week for the Group of 7 summit, Ms. Psaki said, and dispatched Steve Ricchetti, his counselor; Louisa Terrell, his head of legislative affairs; and Brian Deese, his National Economic Council director, to carry on talks while he was gone.

Ms. Terrell and Mr. Deese have also been in touch with members of the bipartisan House Problem Solvers Caucus, including Representatives Josh Gottheimer, Democrat of New Jersey, and Brian Fitzpatrick, Republican of Pennsylvania, on an infrastructure plan. Mr. Gottheimer has been keeping in touch with Mr. Cassidy and Ms. Sinema.

Members of the Senate group, which has sought to position itself as a catalyst for compromise in an evenly divided chamber, have been quietly discussing their own framework for an infrastructure agreement for weeks. Not long after Ms. Capito reluctantly announced her talks with Mr. Biden were off, they stole away to a cramped basement office to meet between votes and further discuss their alternative.