MASON, Texas — The change at the Sunday prayer service was so subtle it went unnoticed by several congregants. Tucked in between calls for divine health and wisdom, the Rev. Fred Krebs of St. Paul Lutheran Church, who rarely brings up politics, fleetingly mentioned this month’s presidential election.

“We pray for a peaceful transition,” he told his congregation of 50 people. The carefully chosen words underscored the political reality in Mason, a rural, conservative town of roughly 2,000 people, after Joseph R. Biden Jr.’s victory over President Trump. Not everyone thought the election was over, and not everyone said they would respect the results.

“My Democratic friends think Biden is going to heal everything and unify everyone,” said Jeanie Smith, who attends the more conservative Spring Street Gospel Church in Mason, which is about 100 miles west of Austin. “They are deceived.”

That is the hard reality Mr. Biden is facing, even after winning a race in which he secured a larger share of the popular vote than any challenger since 1932. Towering before him is a wall of Republican resistance, starting with Mr. Trump’s refusal to concede, extending to G.O.P. lawmakers’ reluctance to acknowledge his victory and stretching, perhaps most significantly for American politics in the long term, to ordinary voters who steadfastly deny the election’s outcome. 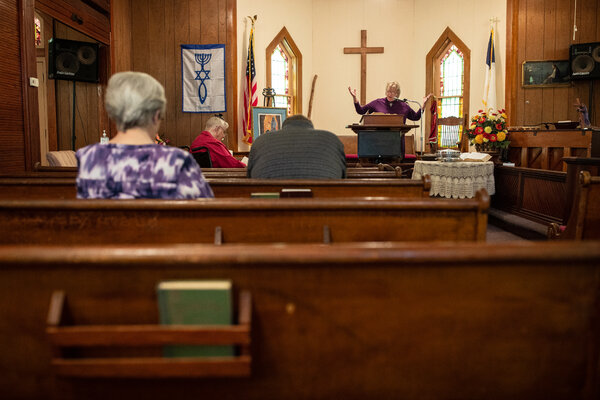 It is all a far cry from how Mr. Biden framed this election, from the Democratic primary race through his victory speech last weekend. He cast the moment as a chance for the country to excise the political division Mr. Trump has stoked, promising to repair the ideological, racial and geographic fissures that have grown into chasms since 2016. Announcing his campaign, he called it an opportunity to restore “the soul of the nation.” Last weekend, he declared, “Let this grim era of demonization in America begin to end here and now.”

But on Election Day, Republican turnout surged across the country — particularly in rural areas like Mason, which along with its surrounding county had among the largest percentage increases in voter participation in Texas. Democratic dreams of a landslide were thwarted as Republicans notched surprise victories in the House and emerged as the favorite to retain control of the Senate. In the days since, thousands of Mr. Trump’s most fervent supporters have gathered across the country, including in Texas, to protest Mr. Biden’s triumph as illegitimate.

“We’re willing to accept the results, as long as it’s fair and done correctly and certified correctly,” said Sherrie Strong, another supporter of the president’s. She, like others, took Mr. Trump’s position that it was strange that he had been leading in numerous places because of in-person votes on Election Day, only to be overtaken once mail-in ballots were counted on election night and over the days that followed. (The delay in counting mail-in ballots in several states was because of restrictions imposed by Republican state legislatures.)

“It’s just a little upsetting when you go to bed at night, and all of a sudden, four days later, these votes are magically appearing,” Ms. Strong said.

Mr. Biden’s message did have political appeal, motivating a crucial slice of voters who helped him lead Democrats back into power.

Ann Mahnken, a 72-year-old lifelong conservative who attends the Lutheran church, said the prospect of his bringing the country together was why, after voting for Mr. Trump in 2016, she chose the Democratic candidate this time.

Mark Lehmberg, a fellow parishioner who voted for Mr. Trump this year after sitting out 2016, said he had given up on the concept of unity — and he advised Ms. Mahnken to do the same. He backed the president because he did not want the economy to shut down over the coronavirus.

“The relationships have already been jeopardized,” Mr. Lehmberg said. “It’s going be hard — impossible — to get people to come together.”

On Monday in Dallas, hundreds of Mr. Trump’s supporters gathered outside the city’s election office in a “Stop the Steal” protest promoted by the state Republican Party. The message from speakers and attendees went further than expressing fears of election fraud, amounting to a wholesale rejection of a Biden presidency and of the Republican elected officials who acknowledged it. One speaker said of the Republican lawmakers who had called Mr. Biden the president-elect, “Remember who they are when you go to the polls next.”

“This is contempt of half of the country by the other half of the country,” said Paul Feeser, 61, who attended the protest in Dallas. “So if the conclusion was for Biden, I would look at it as illegitimate, and I and many others expect to be part of the so-called resistance — as Trump resisted.”

Karen Bell, who was also at the rally, said her distrust centered on mail voting.

“In these swing states, he was ahead, and then all of a sudden in Wisconsin and Michigan and Pennsylvania, they stopped counting,” Ms. Bell said, echoing conspiracy theories about vote counting. “And then we wake up and suddenly Biden is ahead. These mystery votes all came in for Biden and zero for Trump. Something is definitely fishy there.”

The feeling that Mr. Trump’s refusal to concede is justified, and that Mr. Biden’s rise to the presidency should not be recognized, is not universal for Republicans. A recent Reuters/Ipsos poll found that nearly 80 percent of Americans believe Mr. Biden won, including about 60 percent of Republicans.

But other polling has provided mixed results, including a survey from Politico/Morning Consult showing that the number of Republicans who do not believe this year’s election was free and fair has doubled, from 35 percent before Election Day to 70 percent.

In Texas, conservatives have been crowing after Democratic hopes of flipping the state blue and winning control of the Legislature failed to materialize. Even so, state leaders have also fallen in line with the president’s baseless attempts to paint the election as unfair — and the state’s Republican lieutenant governor, Dan Patrick, has offered $1 million for anyone who produces evidence of voter fraud.

But even in Mason, some who supported the president urged the party to move on. “This is over — it’s just what it is,” said Jay Curry, 44, who was arriving to eat at the Willow Creek Cafe and Club with his wife and two children.

The president’s refusal to concede “just means more turmoil and more division,” Mr. Curry said. “We’re divided. It’s red and blue. And they’re against each other more than they’re trying to help anybody.”

His wife, Andrea, was more optimistic.

“I think every president that we’ve had has never intentionally hurt our country,” she said. “They’re going to do their best and that’s all we can hope for.”

Mr. Biden, she added, “is not going to do some intentional crash of our country.”

Her hopefulness stood out in a landscape of dread. Pastor Krebs, the Lutheran minister, said the reason the election felt existential to some was that it represented a referendum on more than just politics.

As a community leader who arrived in Mason shortly before the 2016 election, he said, he has seen how the city’s views of the president are wrapped up in other issues, including the white majority’s relationship with Latino residents and a backlash to Black Lives Matter protesters striving for political power.

At the same time, Pastor Krebs said, sweeping generalities don’t do justice to the complexity of the community.

“Defining people strictly by their parties is not a good thing,” he said. “And I’ve learned that sometimes people think more deeply when they get into a conversation than when we just start labeling one another.”

Ms. Smith, 67, and her husband, Dennis, 69, tied their unequivocal support for the president — even in defeat — to larger cultural concerns.

Like Mr. Biden and his supporters, the Smiths saw this election as a battle for the country’s soul. To unify with Mr. Biden would be an admission that the battle is lost, and that the multicultural tide powering his victory will continue its ascension.

“Everything I worked for, Biden wants to give to the immigrants to help them live, when they don’t do nothing but sit on their butts,” Mr. Smith said.

“And if those protesters come here, if they go tearing up stuff, I guarantee you they won’t be in this town very long,” he added. “We’ll string them up and send them out of here — and it won’t be the same way they came in.”