WASHINGTON — The Trump administration pushed hard to free Austin Tice, an American abducted in Syria in 2012. The C.I.A. formed a special cell to gather intelligence, a powerful Persian Gulf ally was enlisted to help and, among other highly unusual personal entreaties, senior officials traveled to Damascus to plead their case with Syria’s top spy.

None of it worked.

The kidnapping of Mr. Tice, a journalist covering the Syrian war who was abducted in a Damascus suburb and is one of the longest-held American hostages abroad, has been an enduring frustration for government officials.

They had found glimpses of hope over the years. Mr. Tice briefly escaped captivity shortly after he was kidnapped, according to two people familiar with the episode — but he was recaptured. And during the Obama administration, the C.I.A. obtained a tantalizing piece of information: a Syrian document indicating that its government had been holding Mr. Tice.

Former officials described it as a type of judicial form, possibly showing a prisoner or arrest number. It is not clear whether the United States or its proxies ever confronted Syrian officials with the document.

Now the disappearance of Mr. Tice presents a test for Biden administration officials, whose willingness to resolve the case could run up against their reluctance to wade into the sort of unorthodox diplomacy conducted by Trump national security officials.

Former President Donald J. Trump was so focused on Mr. Tice’s safe return that the Syrian government had an incentive to cut a generous deal to free him before Mr. Trump left office. With Mr. Trump’s exit from office, hopes for Mr. Tice’s release have begun to fade.

“If the Syrians had Tice during the Trump administration, that was the time to give him up and get a lot in return,” said Andrew Tabler, who served as the director for Syria on the National Security Council and later as a senior adviser to the U.S. special envoy for Syria. Mr. Tabler declined to discuss the specifics of Mr. Tice’s case. 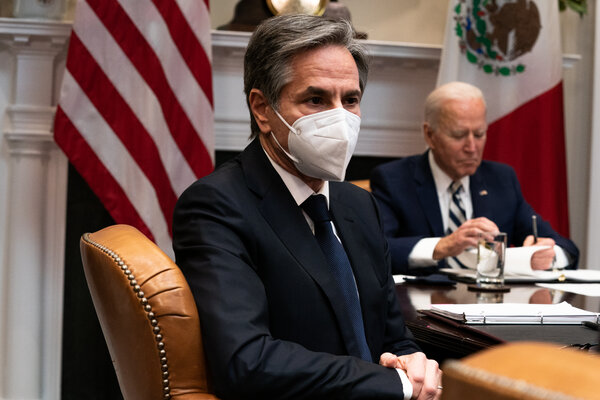 Biden administration officials said they were committed to finding and rescuing Mr. Tice. The State Department disclosed this month that Secretary of State Antony J. Blinken had spoken with the Tice family and made clear that the department had “no higher priority” than seeking his release, a department official said.

“I think that Austin is alive and that it is our job to bring him home to his family,” said Roger D. Carstens, the State Department’s hostage envoy who also served in the post under Mr. Trump.

Mr. Carstens said the Biden administration would remain focused on hostages. “We owe it to hostages and detainees — as well as to their families — that they remain at the forefront of American foreign policy,” he said.

This article is based on interviews with current and former officials who spoke on the condition of anonymity to discuss sensitive information about the Tice case. The Tice family, which has been active in raising awareness of the case and demanding American government attention, did not respond to a request for comment.

Mr. Tice’s kidnapping has stymied American investigators. The Syrian government has never acknowledged holding Mr. Tice, who former officials say was most likely held at a military or intelligence prison reserved for important detainees in or near Damascus.

A month after Mr. Tice was abducted, he appeared blindfolded in a video, surrounded by armed captors. Investigators learned that he had initially been taken to a prison in Damascus and was seen by a doctor, according to two people familiar with the matter. Mr. Tice managed to escape for about a week but was recaptured, the people said.

In 2016, the intelligence community conducted an assessment on Mr. Tice, concluding that strong circumstantial evidence suggested he was still alive. Only the Defense Intelligence Agency objected, on the grounds that the possibility of yearslong survival in a Syrian prison was unlikely. The agency revised its conclusion after other intelligence officials challenged its analysis.

After Mr. Trump took office, efforts to find and free Mr. Tice intensified. The Trump administration made hostage rescues a top national security priority and successfully freed, by its count, more than 50 Americans.

An opportunity arose to try to learn about Mr. Tice in early 2017. An American consultant living in Beirut with ties to the Syrian government traveled to Damascus carrying a message from the U.S. government asking for information about him, former American officials said. The consultant met with Ali Mamlouk, the head of Syria’s National Security Bureau intelligence service. Former officials said they were hoping the meeting would result in the Syrians sharing proof that Mr. Tice was still alive and perhaps ultimately a deal to release him.

Though diplomatic relations between the United States and Syria have been minimal since the United States closed its embassy in Damascus in 2012 and ordered the closure of the Syrian embassy in Washington in 2014, the Trump administration was also willing to use senior officials to directly work for Mr. Tice’s release.

In February 2017, Mike Pompeo, then the C.I.A. director, called Mr. Mamlouk to discuss the Tice case. The call was the highest-level contact between the governments in years, but the effort went nowhere.

In August 2018, a senior C.I.A. official traveled to Damascus and met with Mr. Mamlouk, raising the subject of Mr. Tice.

Christopher C. Miller, the acting defense secretary under Mr. Trump, said he directed additional resources to finding Mr. Tice, though he would not describe those efforts in detail. “We were operating on the assumption that he was still alive,” Mr. Miller said.

American partners in the region took notice of the high-level interest. Mohammed bin Zayed al-Nahyan, the ruler of the United Arab Emirates, said he would help, stirring hope that he could make headway with the Syrian government after the Emirates reopened its embassy in Damascus. Former officials floated the idea of the Emiratis building a hospital in Damascus and the Syrians handing over Mr. Tice as a return gesture, but it never materialized for reasons that are unclear.

Other partners, like the Vatican, also failed to secure Mr. Tice’s release. The Trump administration had even talked to an unidentified Hollywood actor about reaching out to the Syrian government. While some Trump administration officials thought Moscow could intervene, Russia was also ultimately unhelpful.

Two other Americans who had been held by the Syrian government have been released. Kevin Patrick Dawes, a freelance photographer, was released in 2016 after nearly four years in captivity. Sam Goodwin was freed in 2019 after being held for two months. Both men were held for far shorter times than Mr. Tice. Mr. Dawes said he was brutally beaten, while Mr. Goodwin said he could hear “others being tortured around me every day.”

Discovering the fate of Mr. Tice remained elusive to administration officials, including Robert C. O’Brien, the former hostage negotiator who rose to be Mr. Trump’s national security adviser in the fall of 2019. Mr. O’Brien, who had lost his own son in an accident, pushed to get Mr. Tice home.

In March 2020, Mr. Trump wrote a letter to President Bashar al-Assad of Syria asking for Mr. Tice’s release and proposing a direct dialogue.

Following up, the Trump administration in August 2020 dispatched two senior officials to Syria: Mr. Carstens, the hostage czar, and Kashyap Patel, who held senior White House, Pentagon and intelligence posts. Besides securing Mr. Tice’s release, the Americans had also hoped to cut a deal to free Majd Kamalmaz, a Syrian-American.

A retired Army lieutenant colonel who has held senior State Department posts, Mr. Carstens has been deeply involved in the Tice case, and he and Mr. Patel met with Mr. Mamlouk.

Mr. Mamlouk told them he wanted American troops out of Syria and relations between the two countries normalized before Syria would allow any progress on the Tice case. Still, the spy chief never acknowledged that the Syrians were holding Mr. Tice, continuing a pattern of almost nine years.

Mr. Tabler said the meeting would have been an opportune time for the Syrians to bargain if they had admitted holding Mr. Tice. “You can’t sell a rug you don’t have or claim you don’t know where it is.”