The litigation came amid growing pushback from Republican lawmakers and state officials to a provision in the relief package that the Treasury Department said was constitutional. 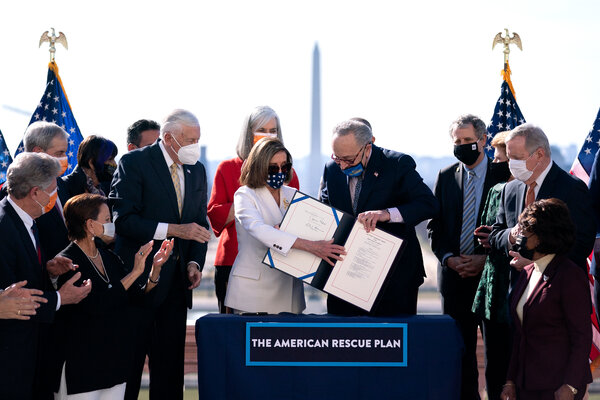 WASHINGTON — State backlash against a restriction in the $1.9 trillion economic relief legislation that prohibits local governments from using aid money to cut taxes emerged as the Biden administration’s first major legal battle on Wednesday, as Ohio sued to block the provision and other states considered similar action.

The litigation came amid growing pushback from Republican lawmakers and state officials, who say that the strings attached to the Covid relief money are a violation of state sovereignty and that imposing tax cut restrictions is an infringement on a state’s right to set its own fiscal policies.

On Tuesday, 21 Republican attorneys general wrote a letter to Treasury Secretary Janet L. Yellen seeking clarity on the portion of the law that prevents them from using the federal funds “to either directly or indirectly offset a reduction in the net tax revenue” resulting from state tax cuts.

The attorneys general called the provision “the greatest attempted invasion of state sovereignty by Congress in the history of our Republic.”

But the Biden administration showed no signs of backing down, saying on Wednesday that the restriction on how states can use their federal funds is constitutional and that those governments should not use stimulus money meant to combat the coronavirus crisis to subsidize tax cuts.

The fight could slow the rollout of more than $200 billion in relief funds that states are expected to receive to help cover Covid-related costs, including money for schools and infrastructure investments.