An estimate of the number of possible deaths and polling that showed a cautious public changed, for now, the president’s approach to the coronavirus pandemic. 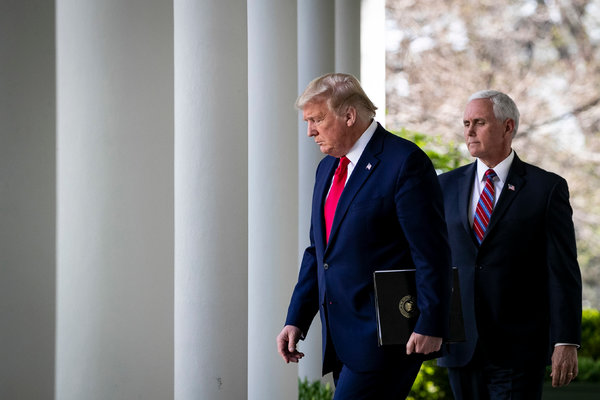 By Peter Baker and Maggie Haberman

WASHINGTON — The numbers the health officials showed President Trump were overwhelming. With the peak of the coronavirus pandemic still weeks away, he was told, hundreds of thousands of Americans could face death if the country reopened too soon.

But there was another set of numbers that also helped persuade Mr. Trump to shift gears on Sunday and abandon his goal of restoring normal life by Easter. Political advisers described for him polling that showed that voters overwhelmingly preferred to keep containment measures in place over sending people back to work prematurely.

Those two realities — the dire threat to the country and the caution of the American public — proved decisive at a critical juncture in the response to the pandemic, his advisers said. The first of those two realities, the deadly arc of the virus, has been known for weeks even if disregarded by the president when he set his Easter target. But the second of the two upended Mr. Trump’s assumptions about the politics of the situation and restrained, for a moment at least, his eagerness to get back to business as usual.

The president’s reversal may prove to be an important pivot point in the effort to curb the pandemic, one that in the view of public health officials averted a greater catastrophe. Mr. Trump’s abrupt change of heart reflected a volatile president who has veered from one message to another, at points equating the virus to ordinary flu that will “miraculously” go away and at others declaring it an all-out war endangering the country.

His move came as additional governors took action to stop the spread of the virus. With new orders on Monday from the governors of Virginia and Maryland, as well as the mayor of the District of Columbia, more than half of the 50 states and three out of four Americans are or will soon be under the directive to remain at home.

They took that action as the number of cases in New York climbed past 66,500 and the number of deaths surpassed 1,200, by far the most of any state. Layoffs continued apace, with Macy’s announcing it would furlough a “majority” of its 125,000 workers. Gap said it would do the same for 80,000 store employees in the United States and Canada.

In the past two days, Mr. Trump has dispensed with the assertion that the cure could be worse than the disease and circled back closer to the tenor of the warnings he has gotten from health advisers. Rather than lift the restrictions he had outlined by April 12, he extended them to April 30 and said on Monday that they “may be even toughened up a little bit,” although a national stay-at-home order like those in New York and California was “pretty unlikely, I would think, at this time.”