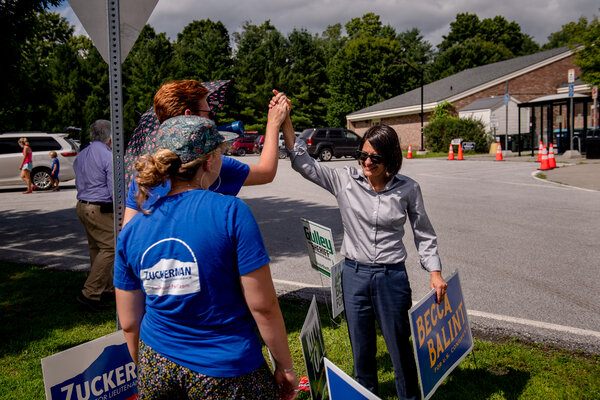 Becca Balint, a progressive leader in the Vermont Legislature who had the support of the state’s most influential political figure, Senator Bernie Sanders, won the Democratic primary for the state’s lone seat in Congress, according to The Associated Press.

Ms. Balint, 54, defeated Lt. Gov. Molly Gray, and if successful in November, she would be Vermont’s first female member of Congress. Their contest was seen as a proxy battle between Democrats’ progressive and moderate wings, with Ms. Gray supported by Senator Patrick Leahy, who is retiring.

Ms. Balint is seeking an open seat being vacated by Representative Peter Welch, a Democrat who is running to replace Mr. Leahy, 82. He is the last member of the Democratic congressional wave of 1974, elected after the resignation of President Richard M. Nixon in the Watergate scandal.

Vermont’s at-large House seat has not been filled by a Republican since 1992, making Ms. Balint a strong favorite to retain it for her party in November.

A middle school teacher before she entered politics, Ms. Balint, who is gay, described in a campaign video moving into her home in Brattleboro with her partner (now her wife), across the street from a neighbor with an anti-gay sign. Eventually she made peace, “and the sign came down,” she says in the video.

Ms. Balint is the president of the State Senate and is a former majority leader. She supported expansion of gun safety measures and was a lead sponsor of an amendment to the state Constitution to guarantee abortion rights, which will be on the state ballot in November.

In her congressional race, she ran on support for a progressive punch list: Medicare for all, the Green New Deal and paid family and medical leave.

“We’ve got to bring people together around an agenda that works for all and not just the few, and that’s what Becca’s campaign is about,” Mr. Sanders said while campaigning for Ms. Balint last month.

Ms. Balint acknowledged on the same campaign swing that Vermont’s deep-blue lean in federal elections meant the primary was the more important election.

“In this race, the race is in the primary,” she told a crowd in Rutland, according to VTDigger. “Whoever wins this primary is going to be the next congressperson, and I hope it’s me.”

There were few policy differences between Ms. Balint and her rival, Ms. Gray, though Ms. Balint was seen as somewhat more progressive.

Ms. Gray, 38, is a Vermont native raised on a farm in Newbury, and she skied on the cross-country team for the University of Vermont. She was an assistant attorney general for the state and was elected lieutenant governor in 2020. Along the way, she worked as an intern for Mr. Leahy and a congressional staff member for Mr. Welch.

Mr. Leahy disclosed that he had voted for Ms. Gray, although he repeatedly said he trusted Vermonters to make their own decisions.

Outside progressive groups poured money into the state to help Ms. Balint, including the Congressional Progressive Caucus PAC and the LGBTQ Victory Fund. That support prompted The Boston Globe to ask, “Will the next member of ‘the squad’ come from Vermont?”