Ahead of the vote on President Biden’s $1.9 trillion stimulus package, lawmakers have offered an array of misleading claims to promote their position on the bill. Here’s a fact check of some common talking points.

Republicans mischaracterized elements of the bill.

“This is supposed to be a Covid bill. Only 9 percent of it goes to Covid.” — Representative Kevin McCarthy, Republican of California and the House minority leader, in an interview this week on Fox News.

This is misleading. A spokeswoman for Mr. McCarthy said that the 9 percent referred to the $160 billion for a national vaccination program, expanded testing and a public health jobs program, as outlined by the Biden administration. In other words, 8.4 percent, or $160 billion of the $1.9 trillion package, is allocated specifically to fighting the coronavirus.

But that is a rather narrow interpretation of pandemic-related funding. The bill also includes other health care spending like subsidizing insurance coverage for laid-off workers, extending paid sick leave and funding for veterans care.

And like the first two relief bills signed by President Donald J. Trump and an alternate measure proposed this year by 10 Republican lawmakers, much of the Biden plan is devoted to providing financial help to families and businesses harmed by the economic effects of the pandemic. The $1,400 stimulus checks and extension of unemployment benefits are the two biggest single expenditures, according to a breakdown by the Committee for a Responsible Federal Budget.

“We’ve run the numbers and here’s your receipt, @SpeakerPelosi @SenSchumer,” — Senator Marsha Blackburn this week on Twitter, breaking down the bill into categories like arts, museums and library services; Pelosi’s subway; services including Planned Parenthood; and “climate justice.”

This is misleading. Ms. Blackburn, Republican of Tennessee, accused Democratic leadership of drafting a $1.9 trillion bill that amounted to a liberal “wishlist.” But the four specific areas of funding she highlighted add up to $547 million or about 0.03 percent of the total $1.9 trillion.

“Pelosi’s subway” refers to a project to extend the Bay Area Rapid Transit system into downtown San Jose — which is an hour south of San Francisco and the district Speaker Nancy Pelosi represents. The project is actually in the district of another Democrat, Representative Zoe Lofgren.

A spokeswoman for the House transportation committee said that the BART extension was not receiving special funding, but rather “simply being funded proportionately” to other similar projects around the country.

Over all, the bill includes $30 billion to help public transit agencies, the bulk of which covers operational costs of transit systems across the nation. About $1 billion of that goes to a Transportation Department grant program to ensure that already approved transit projects — like the BART extension as well as rail improvements in Republican-led states like Indiana and Arizona — remain solvent.

“Art, museums, and library services” refer to the $135 million set aside for the National Endowment for the Arts and $200 million for the Institute of Museum and Library Services.

The bill also devotes $50 million to family planning projects, which Ms. Blackburn characterized as “services including Planned Parenthood.” The group is not explicitly mentioned in the bill, but it has previously received family planning grants. Other grantees include state and local health agencies (including Tennessee’s Department of Health family planning program) and other nonprofits.

Another $50 million is earmarked for “environmental justice purposes,” the bill reads, and is intended to address the health outcome disparities from pollution and the pandemic.

“There are bailouts to Planned Parenthood, stimulus grants to illegal immigrant families.” — Representative Jim Banks, Republican of Indiana, in an interview this week on Fox News.

This is misleading. Mr. Banks’s claim about “illegal immigrant families” receiving stimulus grants refers to families with mixed immigration status, not families where all members are undocumented. Under the bill, couples who jointly file their taxes need to have only one valid Social Security number to receive a stimulus check. But the amount would be $1,400 for an individual, not $2,800 for a couple.

In other words, American citizens or legal residents married to undocumented immigrants would receive the $1,400, but their spouses would not.

The first two rounds of stimulus checks had the same conditions with virtually identical language.

“There’s over a trillion dollars of money unspent from previous relief bills that were bipartisan. The money’s still sitting in a bank account.” — Representative Steve Scalise, Republican of Louisiana, in an interview this week on ABC.

“If you think about what’s happened already, $4 trillion worth of stimulus has been passed. There’s still a trillion dollars’ worth, or close to a trillion dollars, that hasn’t even been spent yet.” — Senator Bill Hagerty, Republican of Tennessee, in an interview this week on Fox Business.

This is misleading. In an op-ed published this month by The Washington Post, Mr. Scalise linked to the Committee for a Responsible Federal Budget’s coronavirus spending tracker as his source for this claim. According to the tracker, about $3 trillion has already been spent. But that does not necessarily mean that $1 trillion will remain unused.

The think tank explained in a blog post in January that “much of it is already allocated or scheduled to be spent, and a small portion will never be spent.” About $775 billion of the “unspent” funding came from the $900 billion stimulus package signed into law in late December, according to the blog post. Funding expected to be doled out over time (loans and Medicaid spending), as well as data lags, also explain some of the disparity. 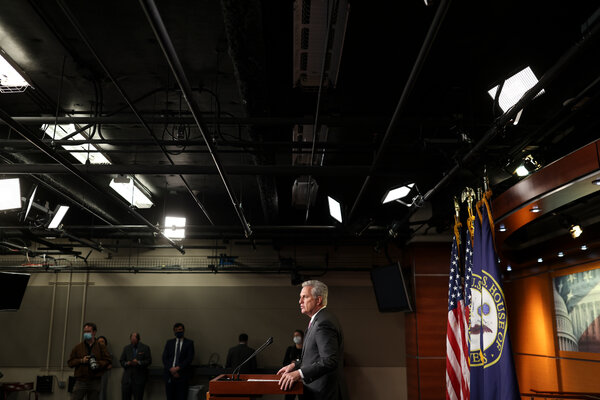 “In fact, 95 percent of that money can’t even be spent until 2022. Do you really want to wait until 2022 to start having your kid go back in school? This bill actually will delay school reopening. This is crazy.” — Mr. Scalise in an interview this week on Fox News.

“We need to get and follow the science and get kids back to school. This bill does not do that.” — Mr. McCarthy, in an interview this week on Fox News.

This is misleading. The bill sets aside $128.5 billion for funding K-12 schools through the Elementary and Secondary School Emergency Relief Fund. The Congressional Budget Office estimated that $6.4 billion of that would be spent in the 2021 fiscal year, which ends in September.

But the budget office also said that the spending rate it estimated was “subject to considerable uncertainty.”

In a letter to congressional leaders, education groups wrote that the notion that schools did not need more funding because of how much they would spend this year was “inaccurate.”

“In conversations with our respective memberships, they report that while the ‘spend rate’ may seem quite low to those unfamiliar with state and district school financial procedures and requirements, they have budgeted for every dollar they are scheduled to receive from the Covid relief bills and are still anticipating more significant costs they will be unable to meet without additional federal funds,” the groups wrote.

A spokeswoman for Mr. McCarthy also noted that the bill “provides no assurance to families that schools will reopen” and that funding was not tied to reopening schools.

Nothing in the bill explicitly delays school reopening, nor does it condition funding on reopening. But a spokesman for the House Education and Labor Committee noted that it was never intended to.

“Our position has always been that these decisions should be made by local school districts in consultation with public health officials,” said Joshua Weisz, the communications director for the committee. “Congress should not be coercing schools into reopening.”

Mr. Biden has been imprecise about some elements of the bill.

“If we don’t pass the American Rescue Plan, 40 million Americans will lose nutritional assistance through a program we call SNAP, the old food stamp program. Do we not invest $3 million — $3 billion to keep families from going hungry?” — Mr. Biden in remarks last week at a Pfizer plant.

This is exaggerated. As FactCheck.org noted, the White House transcript of Mr. Biden’s remarks added “some of” in brackets before the words “nutritional assistance.” That is because failure to pass the bill would not lead to Americans who rely on the Supplemental Nutrition Assistance Program in losing all of their benefits. Rather, the stimulus package signed into law in December temporarily increased food stamp benefits by 15 percent from January to June. The current bill and Mr. Biden’s plan would extend that increase to September.

“For example, if it went — if we gradually increased it — when we indexed it at $7.20, if we kept it indexed by — to inflation, people would be making 20 bucks an hour right now.” — Mr. Biden last week at a CNN town hall event.

False. The federal minimum wage was last raised to $7.25 in July 2009, which if indexed for consumer inflation would be about $8.81 today. Mr. Biden most likely meant to say “worker productivity” instead of inflation. Dean Baker, an economist at left-leaning Center for Economic and Policy Research, has estimated that if the minimum wage had kept up with productivity, it would be about $24.

We welcome suggestions and tips from readers on what to fact-check on email and Twitter.