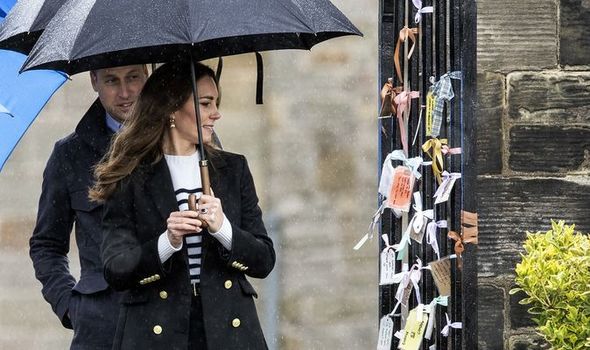 The Scottish Royal borough in Fife is most famous for being the home of golf and having Britain’s third oldest university where Prince William and the Duchess of Cambridge met as students in 2001. North East Fife Lib Dem MP Wendy Chamberlain said: “We are all very hopeful that we have some private support in the Royal family with the Duke and Duchess of Cambridge’s links to St andrews.

“Of course we know it is an independent process and let’s see how it plays out. St Andrews has lots of good reasons to be a city with its historic university and being the home of golf. It also has a cathedral, even though it is now a ruin.”

She said that the judges should not take note of St Andrews only having a population of around 19,000. She said: “St Davids in Wales is a city and it has a smaller population.” Ms Chamberlain admits her loyalties are divided because Greenock in the west of Scotland where she grew up is also one of the 39 towns to put in a bid.

The Duke and Duchess of Cambridge returned to St Andrews where their love was kindled in May this year as part of their tour of Scotland and made it clear the town still has a special place in their hearts,, two decades after they first met there.

Prince William studied geography at the university and the Duchess graduated with a degree in history of art. St Andrews University was established in 1413 as a rival to Oxford and Cambridge and this year was named Britain’s top seat of learning in the Times Good University Guide.