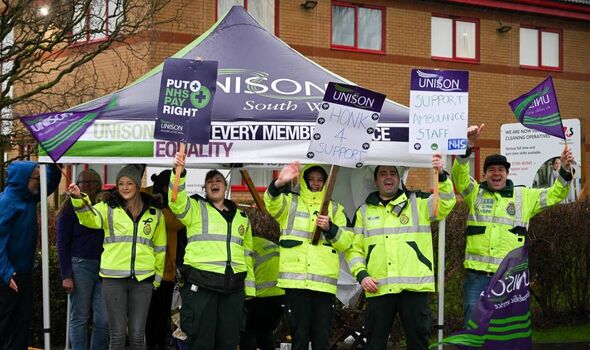 More ambulance workers on announced they will walkout on February 6 when nurses are also staging industrial action. Unite said its members will stage 10 further strikes over the coming weeks, including on the day of mass action.

No 10 said the move was “disappointing” and would cause “disruption” to patients but insisted the government wanted to find a resolution.

“I think it’s important to say firstly that ambulance workers do an incredible job. It’s obviously disappointing that some union members are going ahead with further strikes at a time with the NHS is already under huge pressure,” a spokesman for the Prime Minister said.

“We’ve said throughout this period that we know it will cause disruption to patients, which is why the NHS and unions will continue discussions about contingency planning to ensure we can keep people safe.

“What we want to do is reach a resolution and come to an agreement between the employers and the unions to end the industrial action that we’ve seen over recent weeks and months.

“We want to see all this industrial action come to an end.”

Education unions and government officials were locked in six hours of talks yesterday ahead of strikes at schools.

But Geoff Barton, general secretary of the Association of School and College Leaders said the Government has not made “political decisions” needed to avoid walkouts.

Meanwhile, Transport Secretary Mark Harper insisted an offer made to RMT in a bid to break the deadlocked dispute over pay, jobs, and conditions will not be improved.

The Cabinet minister said there is “not a bottomless pit” of money available to railway workers.

The Rail Delivery Group (RDG), representing train operators, has described its proposal to the RMT of a minimum pay rise of nine percent over two years as its “best and final offer”.